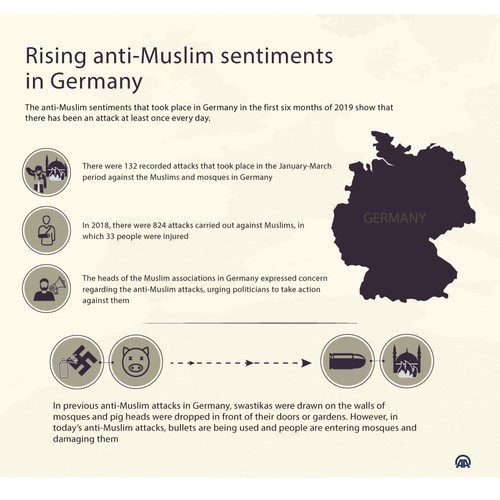 Germany's Muslim community is concerned over the increasing number of anti-Islam attacks, fueled by far-right extremism and xenophobia.

In reply to a parliamentary motion, German Interior Ministry said a total of 132 crimes against Muslims and their places of worship were recorded in the first three months of 2019 alone.

The ministry added that the number of crimes in the second quarter of the year may be higher. Security experts, however, think that the exact numbers may be much higher as not all assaults have been reported.

Even though the official numbers for this year's April-June term are yet to be revealed; only Turkish mosques and foundations were subjected to 15 attacks, in cities like Dortmund, Baden-Württemberg and Frankfurt.

The methods of the latest attacks show anti-Islam sentiment in Germany has proceeded to the next level. While assaults in past were limited with drawing swastikas on mosque walls and throwing pig's head, real bullets have been used to damage mosques in recent attacks.

Burhan Kesici, the head of the German Islamic Council, criticized the attitude of German politicians. He told Anadolu Agency (AA) that their rhetoric has been fueling hatred against Muslims. "We are expecting the politicians to visit our mosques, have a conversation with the people of our community and make us feel a part of this society," he said.

According to a report by the Leipzig-based Competence Center for Right-Wing Extremism and Democracy Research published last November, the country has been showing increasingly hostile attitudes towards immigrants, the Muslim community and other minorities, such as the Roma. One in three Germans thinks foreigners come only to exploit the welfare state.

Germany, a country of over 81 million people, has the second-largest Muslim population in Western Europe after France. Among the country's nearly 4.7 million Muslims, 3 million are of Turkish origin. Many Turkish origin Germans are second- and third-generation German-born citizens of Turkish descent whose grandparents had moved to the country during the 1960s.

This Turkish population, largely descending from the country's "guest workers" who arrived to aid the post-World War II development boom, often complains of the racist attacks and lack of follow-up in police investigations for such incidents.