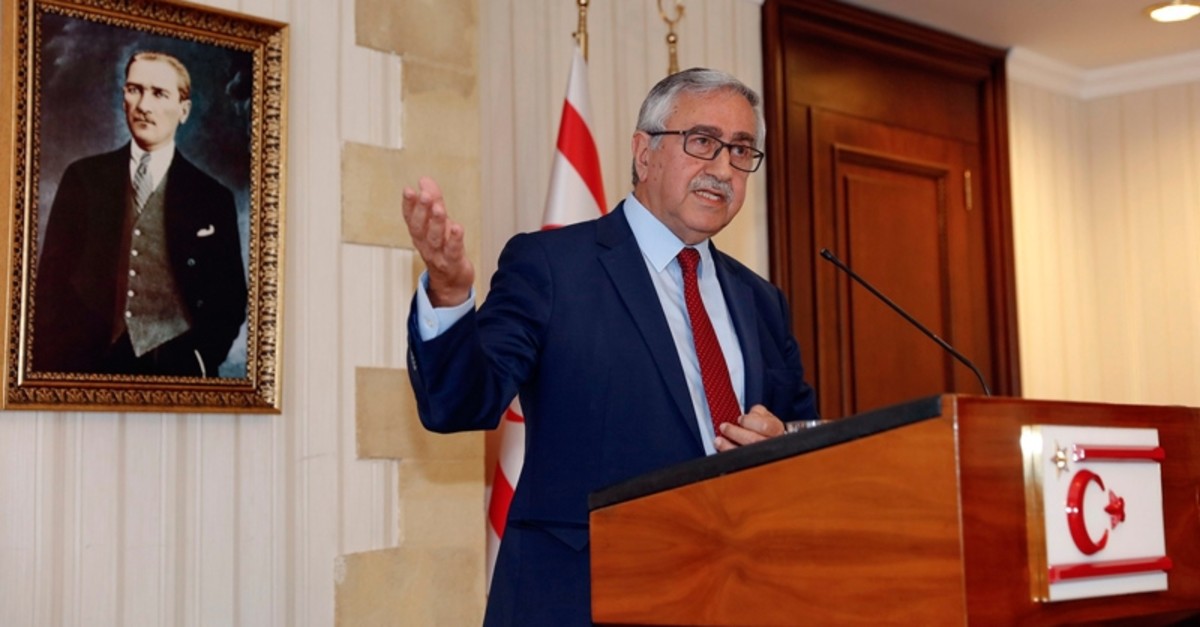 A recent decision by the newly-established government of the Turkish Republic of Northern Cyprus (TRNC) regarding the closed town of Varosha has opened a rift with President Mustafa Akıncı.

In a news conference Friday, Akıncı said he was not consulted nor informed regarding Prime Minister Ersin Tatar's statement that Varosha (Maraş) will be opened for settlement and the decision was taken in dialogue with Turkey. He said it is a "serious mistake" sidelining the presidency regarding such an important aspect of the Cyprus question, adding that he does not believe it is related with Turkey.

"It is not clear what is intended to be done regarding Maraş despite that three days have passed. There are conflicting statements from the prime minister and deputy prime minister," Akıncı said.

Deputy Prime Minister and Foreign Minister Kudret Özersay, who served as the chief Turkish Cypriot negotiator for 12 years including during Akıncı's tenure, told Turkish broadcaster A Haber on Friday that there is a confusion among the public regarding the government's plans on Varosha.

"The TRNC government did not decide to open Maraş for settlement. It also did not decide to award Maraş to someone or open the region under U.N. monitoring. Our decision is to carry out an inventory work inside the closed Maraş," Özersay said, adding that the work will not just be a report, but set a basis for further action regarding the area.

Özersay stated that the government will act in a manner that will not harm the rights of former residents and foundations.

Located south of the eastern port city of Famagusta (Mağusa), Varosha was a famous resort region in Cyprus known for for pristine beaches, but has been closed since 1974. That same year, Turkey used its guarantor rights and intervened in the island following a Greek-inspired coup backed by the junta then in power in Athens. The coup followed decadelong inter-ethnic violence and terrorism targeting Turkish Cypriots, who were forced to live in enclaves when Greek Cypriots unilaterally changed the constitution in 1963 and stripped the island's Turks of their political rights.

Following the operation, Turkish military closed Varosha, which included more than 100 hotels with significant foreign investment, until a permanent solution could be reached on the island. The city is protected by a 1984 U.N. Security Council resolution, stating that the empty town can only be resettled by its original inhabitants. However, 45 years of negotiations proved futile and the town, legally a military zone, is commonly referred to as the "ghost town" due to abandoned and untended buildings.

If the Greek Cypriots had accepted the 2004 United Nations Annan plan for the reunification of the island, Varosha would now be back under Greek Cypriot control and the residents would have their homes back. Despite this, along with significant concessions in the Karpas Peninsula and Morphou (Güzelyurt) area, the majority of Greek Cypriots voted against the plan, whereas Turkish Cypriots supported the plan.

Various other proposals also foresaw allowing unrestricted use for Turkish Cypriots in Ercan Airport and Famagusta Port in exchange for the transfer of Varosha to Greek Cypriots.

Reminding that Varosha is an important and sensitive issue that has the potential to contribute to solving the Cyprus question, Akıncı said: "Next to comprehensive efforts for a solution, in a parallel process, we will pay special attention to the implementation of several confidence building measures that would contribute to the daily life of both communities. Within this scope, a consensus will be sought for the closed Maraş area to be open for settlement under the monitoring of the United Nations and ways to use Mağusa Port and Ercan Airport to overcome bottlenecks experienced by Turkish Cypriots in tourism and trade synchronously."

But if that cannot be achieved, opening the zone for settlement under the Turkish Cypriot administration could be evaluated, Akıncı added. "But in both cases, I'd like to emphasize once again the importance of acting in harmony with the U.N. and within international law," he said.

Regarding the hydrocarbon tensions surrounding the island, Akıncı said that if Greek Cypriots carry out drilling activities, Turkish Cypriots also have to carry out drilling. "It is possible to reverse this course. Cypriot Turks also have rights in this issue. But it is always postponed to the aftermath of a possible solution," the president said, calling for the launch of talks on the issue and proceeding to a common advantage and atmosphere of cooperation rather than tensions.

Özersay also said that the TRNC concluded the continental shelf demarcation agreement with Turkey in 2011 and issued exploration license to Turkish Petroleum (TPAO) after Greek Cyprus issued licenses to several foreign companies. "We had said 'We can also do seismic research,' and we did. We had said 'If you carry out drilling, we will also do it.' They started drilling so we started it too and will continue," Özersay said.

Turkey dispatched its second drillship Yavuz to the east of the island on Thursday while the first drillship Fatih is currently drilling inside Turkey's continental shelf, some 40 sea miles nautical miles off the western Paphos city of Cyprus. The area is claimed by the Greek Cypriot Administration within its unilaterally declared exclusive economic zone (EEZ) although it is not among the areas unilaterally licensed by Nicosia for hydrocarbon activities. The ship's operations prompted Nicosia to issue international arrest warrants for Fatih's crew members, although it is unlikely that the Greek Cypriot administration would attempt to arrest the personnel or that other countries would take the warrants seriously.

Energy giants Total of France and ENI of Italy are heavily involved in exploring for oil and gas off Cyprus through deals with the Greek Cypriot administration as is ExxonMobil of the U.S.

Saying that unilateral exploration deprives the Turkish Cypriot minority of benefiting from the island's natural resources, Turkey has ramped up efforts in the Eastern Mediterranean. Ankara says its actions abide by international law and that it is drilling inside its continental shelf. It granted exploration licenses to Turkish Petroleum in 2009 and 2012.

After Fatih started drilling off Cyprus, the European Union on Tuesday lashed out at Turkey over its plans to drill in the area, warning it was preparing "appropriate measures" in response, a move that came two days after the southern members of the EU echoed a similar stance at the Med7 summit in Malta. Turkey responded that the EU had no right to interfere in the issue.