Turkey capable of defending its rights regardless of any threats, Erdoğan says 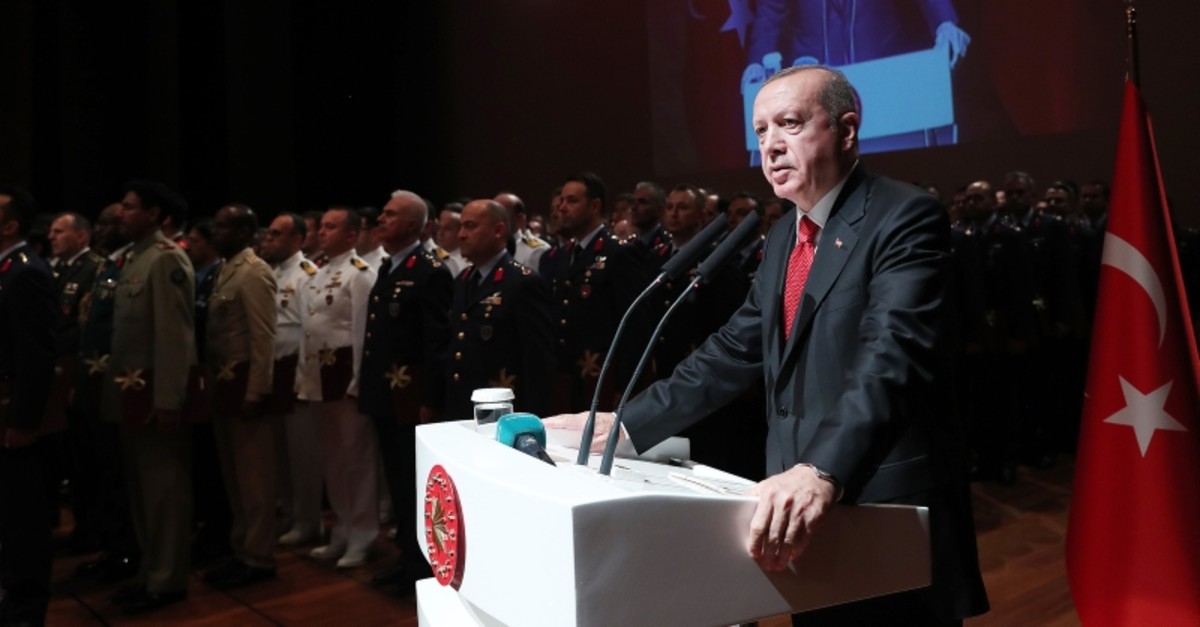 Turkey is capable of defending its rights regardless of any threat of sanctions by international actors, President Recep Tayyip Erdoğan said Friday, highlighting the country's ability to withstand such threats. "Turkey has the power to directly respond to attacks against its existence or unity at its source – before it reaches our soil," Erdoğan said, during his speech at a graduation ceremony at the National Defense University in Istanbul.

"As we support the rights of our country and friends in the international area we see the sanctions we face rising," the president added.

Underlining the tricky situation that the country is in due to its geopolitical location, Erdoğan said that although there have been many attempts to damage the Turkish Republic and its army, the country has managed to thwart all of them.

"The S-400 dispute, the delivery of the F-35s, recent developments in the Eastern Mediterranean and Libya are some of these [tricky conditions]," he added, indicating that terrorist threats toward Turkey are on top of their agenda.

Turkey faces many challenges due to its geopolitical location

"We've spoiled the game in Syria, [and the] Eastern Mediterranean," Erdoğan said, referring to recent developments in the region.

Currently, there are many issues that Turkey has to face in the international arena, mostly due to the region that it is in. For instance, six Turkish nationals were abducted in Libya on Sunday by Gen. Khalifa Haftar's forces in a hostile act. Ankara said it saw the action as banditry, warning that Haftar's forces will become legitimate military targets if they do not release the Turkish citizens. Following the announcement, the captives were freed on Monday.

While Libya was dragged into chaos after the overthrow of Moammar Gadhafi, who ruled Libya with an iron fist for 42 years until 2011. Haftar, a former Gadhafi officer, has been trying to destroy the Tripoli-based, internationally recognized Government of National Accord (GNA) for months. His militia launched an offensive in April against the Tripoli-based government, seeking to capture Tripoli from the GNA but has so far been unsuccessful.

The Cyprus crisis has also been making headlines recently for the resources in the Eastern Mediterranean and the constant power struggle in the region.

Cyprus has been divided since 1974 when Turkey used its guarantor rights to intervene on the island after a far-right Greek Cypriot military coup sponsored by the military junta then in power in Athens sought to unite the island with Greece. The coup followed decade's long inter-ethnic violence and terrorism targeting Turkish Cypriots, who were forced to live in enclaves when Greek Cypriots unilaterally changed the constitution in 1963 and stripped the island's Turks of their political rights.

Turkey has consistently contested the Greek Cypriot administration's unilateral drilling in the Eastern Mediterranean, stating that the exclusive economic zone unilaterally declared by Nicosia violates part of Turkey's shelf, particularly in Blocks 1, 4, 5, 6 and 7. Saying that unilateral exploration deprives the Turkish Cypriots of benefiting from the island's natural resources, Turkey has ramped up efforts in the Eastern Mediterranean.

The president also mentioned the significant position of the country within international organizations, especially NATO.

"Turkey has been a country that strengthened and added more value to NATO as it did with any other organizations it was a part of," Erdoğan said, emphasizing that as long as similar perspectives from responsible parties are provided, the country will be committed to its promises on any issue. He expressed that the country has accomplished all of its duties successfully within the organization and due to its credible stance, the country has been appreciated by many.

Recalling previous mistreatment by the U.S. when it comes to supporting Turkey's defense industry, Erdoğan underscored that those days are in the past and Turkey can now provide for many of its own needs.

"When I approached the U.S. presidents [back in the day], they weren't even letting us rent a UAV [unmanned aerial vehicle]; the armed UAV was not even on the table. Now we produce both UAVs and armed UAVs. We will be able to produce better ones in the next couple of months," the president said. He also expressed that that who issue open or implicit sanctions threats regarding the defense industry will soon realize that this is a matter of ambition.

Tensions between the two NATO allies have been rising over Ankara's purchase of the Russian S-400s missiles, which Turkey is about to receive this month. Washington threatened Turkey and said it could face sanctions and would be excluded from the F-35 program, a multinational NATO defense project in which Turkey is a major manufacturer and buyer.

Turkey has on every occasion argued it won't back down on the deal and buying the Russian defense system is a matter of sovereign decision-making. However, it should be noted that although there seems to be tension between the two countries, the leaders of the countries, Erdoğan and the U.S. President Donald Trump, are actually on good terms with each other, which is expected to have a positive impact on the process, as a meeting between the two leaders at a recent G20 summit proved.

In his meeting with Erdoğan on Saturday on the sidelines of the G20 summit, Trump slammed the Obama administration's reluctance to sell Patriot missiles to Turkey in 2013, saying Turkey was not treated fairly as a NATO member. "So I have to tell you, he [Erdoğan] is a NATO member and he is somebody I have become friendly with. And you have to treat fairly. You understand that? You have to treat fairly. I don't think he was treated fairly. I don't think he was treated fairly," Trump added, giving a clear sign that his administration will not seek the path of sanctions and avoid unfair treatment of Turkey in the ongoing S-400 and F-35 tensions. He said his administration would be looking at different solutions regarding the issues.

"When we reach a point that we do not need anyone, it would not matter what they say," Erdoğan said. He also said that 17 years ago when the ruling Justice and Development Party (AK Party) had just come to the power, Turkey was producing only 20 percent of its defense industry needs, while today this has risen to 70 percent.