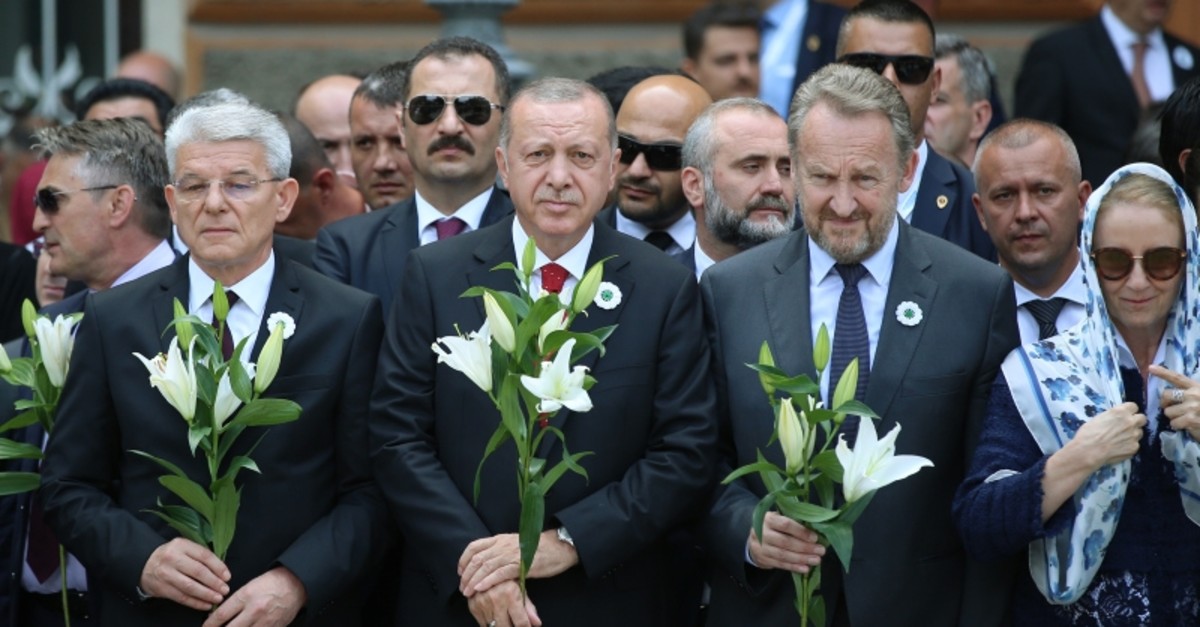 President Recep Tayyip Erdoğan on Tuesday commemorated the thousands of victims of the Srebrenica genocide, including a farewell to 33 newly identified victims.

On the second day of his two-day visit to Bosnia-Herzegovina's capital Sarajevo, Erdoğan attended a procession to commemorate the genocide's thousands of innocent victims.

The remains of 33 Srebrenica genocide victims were placed on a truck laden with flowers in the Bosnian city of Visoko on Tuesday morning for their final journey to rest in a cemetery.

The victims will be buried in the village of Potocari, northwest of Srebrenica, on Thursday to mark the 24rd anniversary of the genocide.

The truck carrying the victims' remains arrived at the Presidential Council Building in the capital Sarajevo. Erdoğan together with Bosnian officials and members of the public prayed for the victims and placed flowers on the truck.

Sarajevo locals showed great interest in the president and first lady Emine Erdoğan, who took time to chat with them and have their photos taken.

As the truck passed through the streets of capital Sarajevo, thousands of people, including women and children, could be seen crying. Many showered the truck with flowers and raised their hands in prayer.

Every year on July 11, newly identified victims of the genocide -- which claimed the lives of over 8,000 people -- are buried in a memorial cemetery in Potocari, eastern Bosnia. Thousands of visitors from various countries attend the funeral service and burials.

As of this year's funeral, the number of burials in the cemetery will rise to 6,643.

The U.N. Security Council had declared Srebrenica a "safe area" in the spring of 1993. However, Serb troops led by Gen. Ratko Mladic -- later found guilty of war crimes, crimes against humanity, and genocide -- overran the U.N. zone.