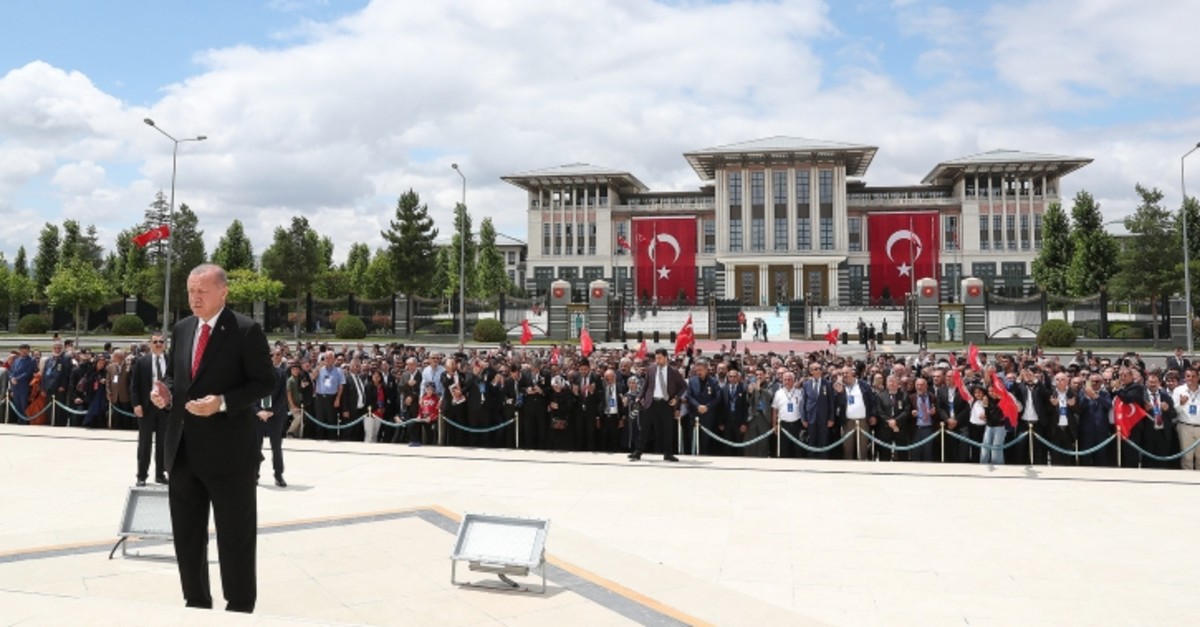 President Recep Tayyip Erdou011fan, accompanied by relatives of the dead and injured on July 15, 2015, prays at a memorial at the Beu015ftepe Presidential Palace Complex on the third anniversary of the bloody coup attempt. (AA Photo)
by Daily Sabah Jul 15, 2019 4:56 pm

Nationwide ceremonies to mark the third anniversary of the July 15, 2016 foiled coup attempt commemorated Monday the fallen heroes who died while protecting democracy against the coup plotters and celebrated July 15 Democracy and National Unity Day with millions of citizens and top officials in attendance.

On the night of July 15, 2016, a small military junta, accused of being members of the Gülenist Terror Group (FETÖ), tried to overthrow the democratically elected government and assassinate President Recep Tayyip Erdoğan, who was on holiday in the Marmaris district of southwestern Muğla province.

Coup plotters, who used heavy weaponry, including fighter jets, helicopters and tanks, against pro-democracy people that poured onto streets, killed 251 people and wounded more than 2,200. 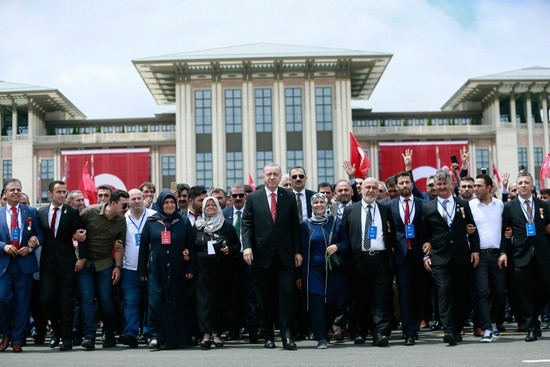 President Recep Tayyip Erdoğan's program began earlier in the day with a commemoration ceremony at the Beştepe Presidential Complex in the capital Ankara. Meeting with victims and survivors of the failed coup attempt at the presidential complex, Erdoğan placed a wreath on the July 15 Martyrs' Monument. The ceremony was followed by Erdoğan's visit to Ankara's Beştepe Millet Mosque, where he recited verses of the Quran in memory of the victims. 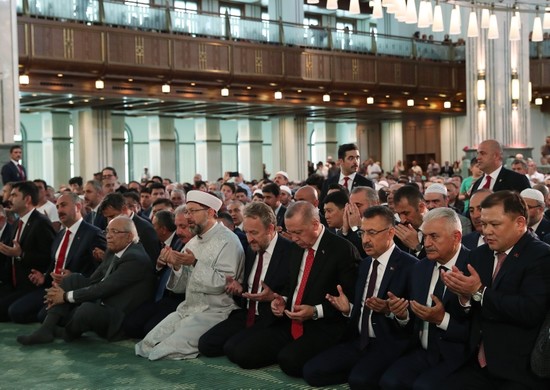 Parliamentary Speaker Mustafa Şentop and Interior Minister Süleyman Soylu also attended a ceremony in Ankara. Visiting the headquarters of Special Forces Command, an elite military unit known for its success in counterterrorism operations, they commemorated martyrs who devotedly sacrificed their lives to protect the nation.

The coup attempt, which was the first in almost two decades in coup-prone Turkey, saw FETÖ's military infiltrators trying to seize power. The attempt was thwarted thanks to strong public resistance. One of the icons of this resistance was Ömer Halisdemir, a sergeant who was gunned down by one of the coup's leaders upon the orders of a general he served as an aide. Halisdemir was stationed at the headquarters of the Special Forces Command. Halisdemir, who has been posthumously described as one of the heroes of the anti-coup resistance, was shot dead by another set of putschist soldiers who were accompanying putschist general, Semih Terzi, when the latter arrived at the headquarters to take it over. After the killing of Halisdemir, the headquarters were the scene of a brief conflict between pro-coup and anti-coup military officers, who ultimately foiled the takeover attempt.

Signing the memorial diary there, Şentop wrote: "Honorable children of our sacred nation, on the night of July 15th, you shielded your lives against the darkness of the traitors who targeted our independence, our will and our country. Our nation does not forget the betrayal and perpetrators we have suffered, as well as keeping your heroes in the most exceptional position of the heart. We salute you with consciousness, morality and faith that teaches you how to defend your homeland. You are now entrusted to the mercy of God and the intercession of the prophet. Our nation is loyal to your memory and sacred to which you devote your life, and is loyal and determined to stay that way. May your soul be respected and your martyrdom acceptable."

Şentop then chaired a special session in Parliament that Erdoğan also attended. Following Şentop's opening speech, political parties' representatives made their speeches to commemorate the third anniversary of the July 15 failed coup attempt, orchestrated by FETÖ. 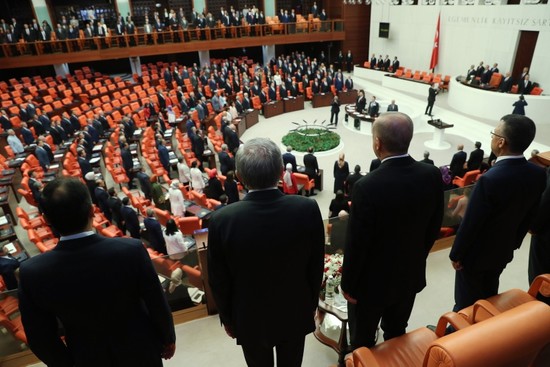 During the night of the coup attempt, pro-coup F-16 and helicopter pilots bombed many government buildings, including Parliament, the presidential complex and the headquarters of the National Intelligence Organization (MİT). Two bombs were dropped on Parliament at midnight, destroying a hall. The bombed area was later renamed Şeref (Honor) Hall. Deputies from all political parties gathered in Parliament after the audacious attack to join the people's resistance.

Later in the day, President Erdoğan flew to Istanbul, to address the public at Ataturk Airport, and afterwards an opening ceremony for the July 15 Memorial Museum at the former Boğaziçi (Bosphorus) Bridge, now called the July 15 Martyrs' Bridge.

"On the night of July 15, they wanted to bury Turkey into darkness but failed," Erdoğan said at Atatürk Airport.

"I salute every member of our heroic nation, who stood against planes, tanks, bullets to protect the independence of our nation and the future of our country on July 15," he said.

He also applauded the soldiers and staff of the Turkish Armed Forces.

"I would like to express my gratitude on behalf of myself and my nation to our media, non-governmental organizations and intellectuals for setting an example to the world," Erdoğan said.

He also underlined on the importance of commemorating the putsch attempt to prevent "greater evils".

"No one, no network of traitors and no terrorist organization will be able to disrupt the unity, solidarity or the brotherhood of the Turkish nation," he vowed.

"On the anniversary of July 15, we commemorate our heroic martyrs, who gave their lives for democracy and homeland with mercy and our veterans with gratitude," said Foreign Minister Mevlüt Çavuşoğlu in a Twitter post.

"On the night of July 15, we showed the world that we would not kneel before any human power other than the will of the nation. This honor is granted to very few nations," Justice Minister Abdulhamit Gül on Twitter.

"We commemorate all the martyrs who sacrificed their lives for our independence and future with mercy and gratitude," he added.

Culture and Tourism Minister Mehmet Ersoy also said July 15, which should remain fresh in the memories of those who forget history, is also an absolute warning to those who want to test our will.

"We will not forget the betrayal of our nation that night and nation's heroism," said Treasury and Finance Minister Berat Albayrak in a Twitter post.

"As a last resort, they tried to stop the broadcast by bombing the campus. The AKA-1 was shot and a jet bombed the campus by making four dives on the Türksat campus. The treacherous coup plotters could not achieve their abusive goals, and at 2:40 a.m., they ran away without looking back," he said.

Turkey marks July 15 as Democracy and National Unity Day. The day is commemorated with events honoring those who lost their lives beating back the putschists and to remember bravery of the nation.

FETÖ was also behind a long-running campaign to overthrow the legitimate state apparatus, through infiltration into Turkish institutions, particularly the military, police and judiciary.