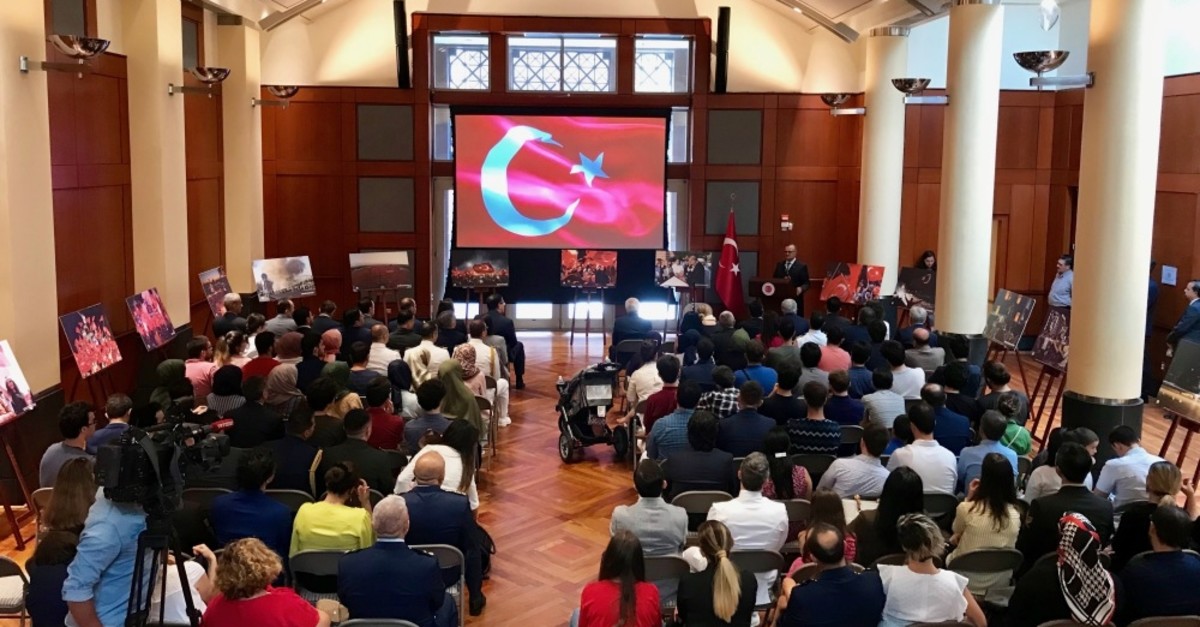 Turkish people living in different countries commemorated the people who lost their lives during the coup attempt that was perpetrated by the Gülenist Terror Group (FETÖ) on July 15, 2016. An event was organized in the U.S., where FETÖ-leader Fetullah Gülen resides, with the participation of ambassadors from Russia, Tajikistan and the Turkish Republic of Northern Cyprus (TRNC) and diplomats from Germany, Azerbaijan, Hungary, Oman, North Macedonia, Bosnia-Herzegovina and Afghanistan. The event held in the Turkish Embassy also saw the attendance of U.S. State Department officials and some high-level U.S. diplomats. Speaking at the event, Turkey's Ambassador to Washington Serdar Kılıç said that the attempt was different from other coups in Turkish history as the plotters bombed their own Parliament and institutions, killing 251 citizens.

Kılıç added that the person responsible for this attempt was Gülen, who lives "two hours" from Washington.

Turkey's Ambassador to Berlin Ali Kemal Aydın said yesterday in an op-ed published on the embassy's website that German authorities are underestimating the threat posed by FETÖ. He said the country is too tolerant of the group and its members are still active in Germany, despite Ankara's strong warnings.

"Many prep schools, private schools and associations linked to this terrorist organization constitute an extensive network across Germany and these institutions are used for indoctrination and for recruiting new members," he said. Turkey's Consul General in Cologne Ceyhun Erciyes also said in an event organized in the consulate building that Germany has become a safe haven for FETÖ terrorists.

In France, another prominent EU member, an event was held in the Paris Embassy where Turkish Ambassador İsmail Hakkı Musa said that the fight against FETÖ will continue. Musa also informed French authorities regarding the activities of the terrorist organization.

In order to remember July 15, a concurrent choreography was organized in London, where 50 Turkish and 50 English performing artists portrayed the coup night.

In another commemoration event held in the capital Pretoria, Turkey's Ambassador to South Africa Elif Çomoğlu Ülgen said, "Today is an important day for us as Turks to remember and not to forget the unfortunate heinous coup attempt three years ago."

Ülgen addressed the Turkish people living in the country and a group of South Africans who gathered at the embassy to show their solidarity with the Turkish government and its people.

"We remember the martyrs who lost their lives and those who were injured defending Turkish democracy," she said.

FETÖ and its U.S.-based leader Fetullah Gülen orchestrated a failed coup in Turkey which left 251 people dead and over 2,200 others injured. It was behind a long-running campaign to overthrow the Turkish government through the infiltration of state institutions, particularly the military, police and judiciary.

Ülgen said Turkey celebrated July 15 across its foreign missions as both a day of mourning and a day of joy.

On the weekend, the Turkish Embassy in Pretoria also hosted a screening of a documentary film produced by Turkey's state-owned English news channel TRT World, which shed light to the dark side of FETÖ.

Later on Monday, the Yunus Emre Institute also held a panel discussion on the failed coup and the dangers of FETÖ and their activities.

Having premiered on July 8 in London, TRT World's documentary "The Network" analyzed the secret structures of the terrorist group, its leader Gülen and why Turkey is demanding that he be extradited and held accountable for his role in the coup attempt.

Kerem Alp, Turkey's Ambassador to Uganda, said FETÖ lost its backbone in Turkey and was now trying to survive through its presence in other countries through schools and hospitals.

Alp urged the Ugandan government to cooperate with Turkey in eliminating the threat that FETÖ posed by closing schools and hospitals affiliated with the terror group.

Meanwhile, Turkish Ambassador to South Sudan Tuğrul Biltekin said Turkish people who have stood against this horrific threat fervently and courageously demonstrated to the world that they did not recognize any power over their will and stood ready to sacrifice their lives to protect their state and democratic system.

Turkey marks July 15 as Democracy and National Unity Day. The day is commemorated with events honoring those who lost their lives beating back the putschists and in remembrance of the bravery of the nation.

Speaking to Anadolu Agency (AA), Turkish Cooperation and Coordination Agency (TİKA) Coordinator Emre Yüksek said, "This program, which has been running for more than four years now, aims not only to cultivate the spirit of voluntary work but also envisages to bring positive change and to train the future change makers in various professions."

"This is part of the National Unity and Democracy Day activities in Kenya, and we have partnered with local doctors from Nairobi and Garissa to conduct cataract surgeries and provide treatment to patients suffering from eye-related disorders."

In Libya, Khalid al-Mishri, who served as chairman of the High Council of State, expressed his admiration on Monday of Turkish people for their stance against coup attempt.

"The Libyan people and the Government of National Accord stood by Turkey in the face of the July 15 coup attempt and expressed their support through messages and prayers," al-Mishri recalled.

Turkish Ambassador to Libya Serhat Aksen also said that Tripoli had taken necessary steps to end FETÖ's presence in the country by closing a school affiliated with the terrorist group and emphasized the strong relationship between two countries.