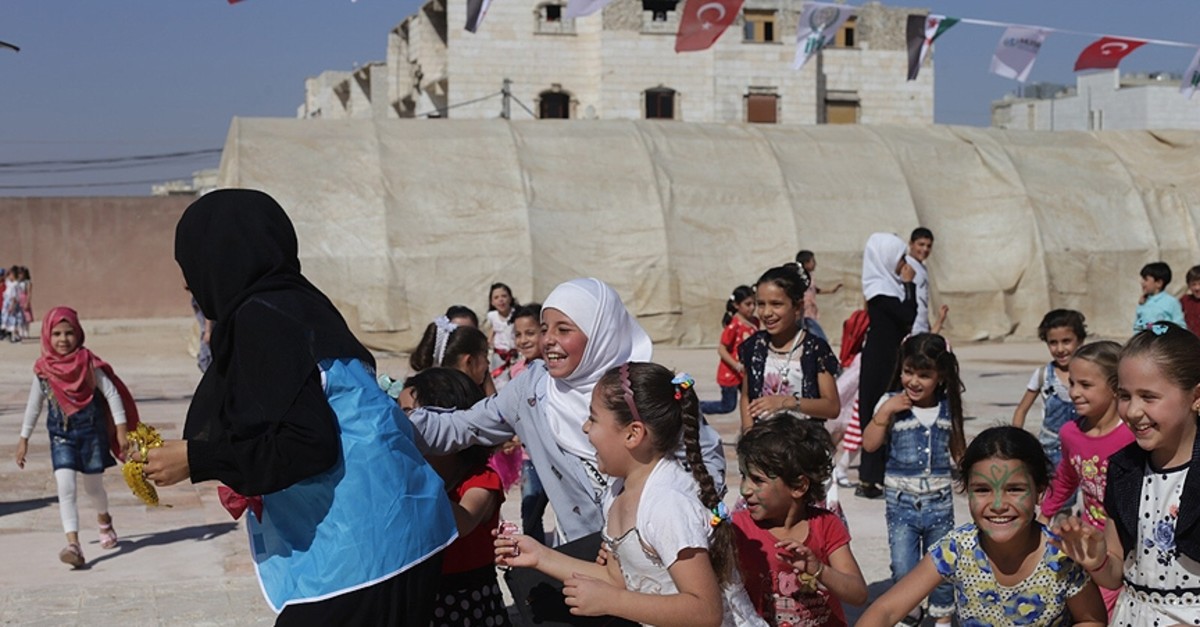 Syrian children participate in various activities during the ,Unlimited Festival, organized by Turkey's International Refugee Rights Association in Al-Bab after it was cleared from terrorists in Operation Euphrates Shield in Sept. 2019. (AA Photo)
by Daily Sabah Jul 25, 2019 12:34 am

It seems that Turkey has become the target of an online smear campaign with false reports claiming that Turkish authorities are deporting Syrian refugees after the Istanbul governor's office ordered unregistered migrants to be relocated to other cities.

On Monday, the Istanbul Governorate issued a statement saying that Syrian nationals that have not been registered by the government or those that were registered elsewhere in Turkey will be transferred to provinces determined by the Interior Ministry.

Soon after the governorate's statement went live, several users on social media launched a smear campaign against Turkey, blaming Ankara with false reports of Syrians being forcefully deported, despite Interior Minister Süleyman Soylu reiterating that Syrians would not be subjected to deportation.

Soylu emphasized that Turkey begun efforts to manage of the movements of migrants and registration of Syrian refugees in an orderly fashion eight years ago, and succeeded with what the rest of the world has not.

Despite the minister's remarks however, several social media users began what appeared to be a disinformation campaign targeting Turkey, sharing falsified reports and blaming Ankara for allegedly deporting Syrian refugees back to Syria, including Idlib, a hot point area.

One report from Emirati news outlet The National claimed Turkish authorities had rounded up dozens of Syrian refugees across the country and forcibly deported them.

One point that stands out among the false claims on social media, however, was the fact that various users who participated in the smear campaign were actually supporters of the PKK terrorist organization. Moustafa Jacoub, the person who shared a n illustration that accuses Turkey for mistreating Syrians, was revealed to be a supporter of the PKK, and even made some illustrations aiming to create similarities between Marvel Comics' Captain America and the terrorist organization. Similarly, other accounts such as @RojnameNewsEnglish and @peywendi also seem to be supporters of the PKK, since other posts of the accounts reveal their stance on the terrorist organization.

Although there is misinformation, the Syrian Coalition confirmed Thursday that there will be a formal coordination committee set up between the Syrian National Coalition and Turkey's Interior Ministry "to follow up and settle the situation of the Syrians in Turkey and protect their rights," as Soylu ensured the coalition that "families would not be deported and will be treated in a humane manner."

Turkey hosts most refugees in the world

Contrary to the campaigners' narrative, Turkey has been a bastion for Syrians since the crisis that erupted in 2011, when Bashar Assad's regime brutally repressed peaceful calls for democracy.

"For the fifth consecutive year, Turkey hosted the largest number of refugees worldwide, with 3.7 million people," most of which are refugees from the Syrian civil war, followed by Pakistan, Uganda, Sudan and Germany, the report said.

Interior Ministry figures say the number of refugees in Turkey was 4.2 million in 2017 and has now reached 4.9 million.

Ankara has spent nearly $40 billion so far for the refugees, while it has only received about 6 billion euros of support from the international community.

Despite some factions in Turkey becoming restive over a record number of refugees in various cities and a large amount of money spent on them amid deteriorating economic conditions in the country, the government insists on keeping its open-door policy, and providing maximum support for refugees.

While Turkey has been hosting almost 4 million refugees, other countries, especially Western ones, have been failing the refugee community by not welcoming them in significant numbers.

Peace talks and the Astana process

Ankara also became a key player in efforts to rebuild Syria and restore its democracy.

Since the beginning of the Syrian war, Turkey has been involved in efforts to establish democracy in the war-torn nation.

In 2015, then-Turkish Foreign Minister Feridun Sinirlioğlu and his counterparts from 19 other countries met in Austria's Vienna to hold the first round of Syria peace talks. Ever since, Turkey has actively participated in various summits on the Syrian crisis including the Geneva and Lausanne talks which aimed to end the war and reach a political solution.

In 2017, Turkey held the first Astana talks with Russia and Iran to bring all warring parties in the Syrian conflict to the table to facilitate U.N.-sponsored peace talks in Geneva. The Astana talks supported the establishment of a U.N.-backed constitutional committee in Syria as a way to find a political solution.

The same year, Russia, Turkey and Iran signed a deal in the Kazakh capital Nursultan (formerly Astana) to establish de-escalation zones in Syria, namely the northwestern Idlib province, north of the central city of Homs, the Eastern Ghouta area outside Damascus and in the southern provinces of Deraa and Quneitra.

In 2018, when Assad forces ramped up their military offensive against their opponents in the Idlib area, the international community warned against an imminent and unprecedented humanitarian crisis. Trying to avert a massacre, President Recep Tayyip Erdoğan signed the Sochi agreement with his Russian counterpart Vladimir Putin in September 2018 to create a demilitarized zone.

According to the agreement, the cease-fire in the Idlib region would continue, on condition that all heavy arms are removed and radicals withdraw from the region.

After the war erupted in Syria, the resulting power vacuum gave incentive to terrorist organizations to expand their territories.

Syrians quickly found themselves trapped between a raging civil war and terrorist groups like Daesh and the PKK's Syrian offshoot the People's Protection Units (YPG) growing in numbers and increasing their influence over the lands.

With already a sizeable presence in Syria, Daesh quickly spread across the land and ruled almost a third of Syria at its height.

Meanwhile, the YPG also began thriving thanks to the backing they received from the U.S.

The U.S. has supported the YPG under the name of the SDF, which is considered by Ankara to be the Syrian offshoot of the PKK terrorist organization that has waged a more than 30-year brutal war against the Turkish state.

The U.S. approached the SDF as a "reliable partner" in its fight against Daesh and continued to provide it with arms and equipment despite strong objections by Turkey.

With heavy armaments and expertise granted by the U.S., the YPG quickly expanded its influence in northern Syria along the Turkish border.

Turkey carried out two cross-border operations west of the Euphrates River, Operation Euphrates Shield launched in August 2016 and Operation Olive Branch in January 2018, to drive terrorist groups from its borders.

Thanks to these operations, areas like Al-Bab, Afrin and Azaz were liberated from the PKK's Syrian branch the YPG and Daesh terrorists, making it possible for Syrians who fled violence to return home.

In February, the Interior Ministry said more than more than 300,000 Syrian refugees were able to return to their hometowns that were liberated from terrorist elements through Turkish military operations.