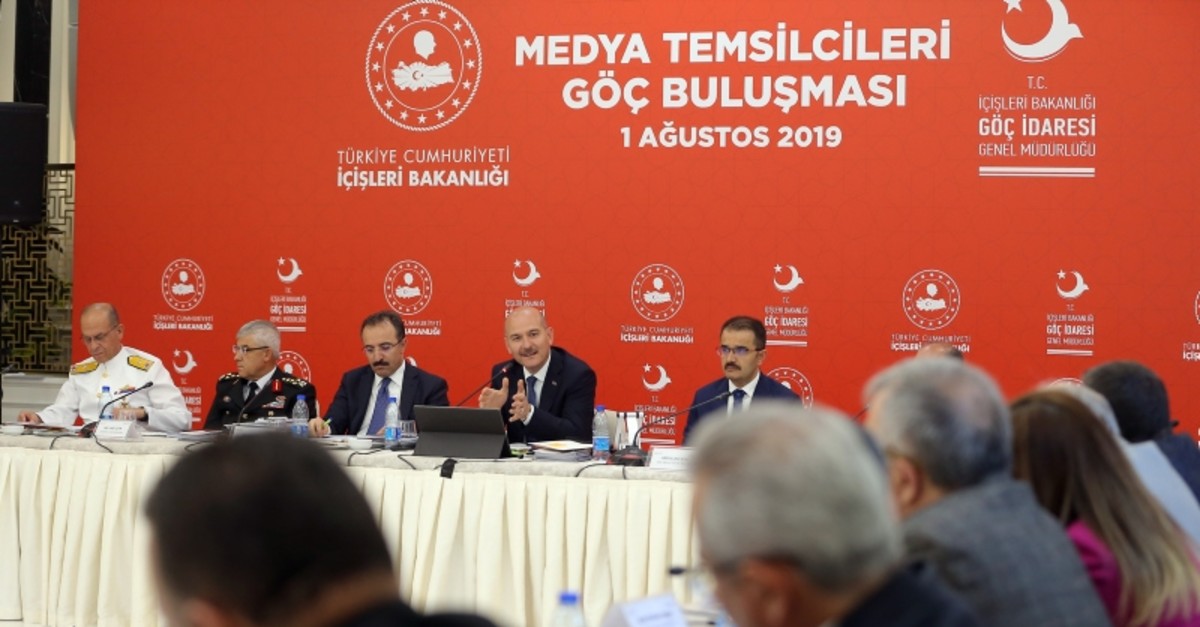 "Turkey is one of the top three countries that tackles irregular immigration in the world perfectly," said Minister of Interior Süleyman Soylu, referring to the recent unfair smear campaign against the country on the issue.

Speaking to Ankara representatives of the media during a briefing titled "Media Meeting on Immigration," Soylu stated that Turkey has had no changes in its policies and regulations over irregular immigration. He also underlined the latest false claims generated by social media over Syrians and Turkey forcing them to return their country are intentional and vicious.

In order to emphasize the significance of managing Syrian refugees in Turkey he said, "We have 3,639,284 registered Syrians in our country since the war begun. They have been registered since they started to flee to Turkey. We have all the information about them; fingerprints to personal information. We have accepted 5.7 million refugees including Syrians. This couldn't happen and be managed as such in any other part of the world" Soylu added.

"We see some politicians and foreign groups who want to take advantage over this situation and spread disinformation. We acknowledge that it is a very complex and dangerous issue but we will prevent this by maintaining the truth and informing the public as much as we can," Soylu stated.

The latest operation to prevent irregular immigration of unregistered migrants in Turkey, particularly in the countries' most populous province of Istanbul, has been on the agenda in the last few weeks. However, headlines on social media such as "Turkey deports Syrians forcefully back to war zones" are misleading according to experts and authorities on the matter. In accordance with Article 4 of the Law on Foreigners and International Protection (LFIP), which is in force in Turkey, foreigners who are considered to be unsafe and are subject to inhumane treatment or torture in their country are under the protection of the law and are not sent back to their country by force.

"Despite Turkey's efforts there is serious disinformation and a smear campaign against our country over the Syrians," Soylu said. "We all know the Syrians cartoonist who lives in the United States and his provocative drawings. Once we look at these campaigns we see that they try to wear out Turkey despite its stability efforts and take advantage over this very fragile issue which is migration" he said.

He added that the aforementioned smear campaign not only targets Turkey's migration policy but also Turkey's war on terror beyond its borders.

'We don't treat illegal migrants as terrorists as other countries do'

Despite the disinformation fueled by some internal and external fractions, Soylu emphasized that Turkey is one of the very few countries around the world has the international and humanitarian standards to manage irregular immigration as well as be a warm home to refugees who have fled from war-torn countries.

"We have had no changes in our policies over irregular immigration. We manage this policy with our conscience. We don't treat the illegal migrant that we capture as terrorists like in the Western countries. We treat these people [well] as we rescue them from death," Soylu stated.

Sharing the numbers of the International Migration Organization (IMO) on irregular migrants who used different routes to migrate in 2016, Soylu said that there were 181,436 people who used the North Africa-Italy route and 173,561 who used the Turkey-Greece route. "Among them 4,576 people lost their lives on the North Africa-Italy route, this number was 434 on the Turkey-Greece route," Soylu further underscored.

Soylu underscored that terror and violence are created by the same powers in the Western world who want a destabilized world by the time they take advantage from irregular and forced migration to carry out illegal human, drug and weapon trafficking. "This is one of the crucial issues of our century" he said.

Pointing out Turkey's decisiveness on how to manage irregular immigration and maintain a warm home for refugees on the other hand, Soylu said that Turkey will not reverse its human at the center position in any sense.

"We know what we do. We have very high standards and a well-formulated migration policy and this is not new. We have been implementing this policy since the first Syrians fled to Turkey in the early ages of the war and we do not have any migration crisis in Turkey" he continued.

Turkey implemented an open-door policy when the war in Syria began in 2011 and gave temporary protection status to Syrians in 2014. Since then, Turkey has been issuing adjustment policies in order to regulate Syrians social, cultural and economic needs.

Describing Turkey as the "first shore" where irregular immigrants stop, Soylu stated that Turkey did not choose to be a "rock" which repulses them. "They did not run toward the Turkish border to earn more money. They escaped from death. It can be true that they established an axis also used by economically driven irregular immigration but the core determinant of the collective migration was due to terror and violence" he said.

Soylu also underlined that 60% of the Syrians who escaped from war and brutality used to be living Turkey's national oath. "Our conscience, humanitarian, cultural and religious perspective necessitates to act in this way and this perspective constitutes the backbone of our politics on this issue" Soylu added.

Syrians who escaped from YPG brutality constitute 17% of total

In Turkey, there are almost 3.7 million registered Syrians live who are under temporary protection status. According to the Interior Ministry, the distribution of the areas and cities where Syrians were forced to live their homes and flee to Turkey are as follows; 64% from regime-controlled areas including Aleppo and others; 8% Idlib, 8% al-Hassakah, 5% Raqqa, 5% Deir el-Zour, 5% Hama, 4% Homs, 5% Damascus, 17% PKK's Syrian affiliate People's Protection Units (YPG) controlled area, 8% Turkish controlled Operation Olive Branch and Euphrates Shield area and 8% Free Syrian Army (FSA) controlled areas.

So far there are already, 339,000 Syrians who have returned home voluntarily to areas secured by the Turkish military. Interior Minister Soylu also said that this trend will most likely continue especially after the secured areas are expanded in other parts of Syria. "Based on our surveys almost 70% of Syrians who live in Turkey want to return home once the security is maintained" he said.

Emphasizing the interaction of all terrorist organizations on illegal immigration and crime rings, Soylu said that Daesh and YPG are all involved in illegal human trafficking as well as the Gülenist Terror Group (FETÖ). Soylu said that many social media accounts have been intercepted which were revealed as FETÖ supporters and related to smear campaigns against Turkey over the refugees. He also stated that 8,000 FETÖ members escaped from Turkey by using the via the Greece illegal migration route.

To enhance control over irregular migration and human trafficking on its seas, Soylu also added that a new radar system will be installed and integrated, in addition to existing the Turkish Naval Force Command and Ministry of Transportation radar systems which will cost 350 million euros ($388.52 million) to Turkey.