Libyan army ready to counter any attack by Haftar's militia 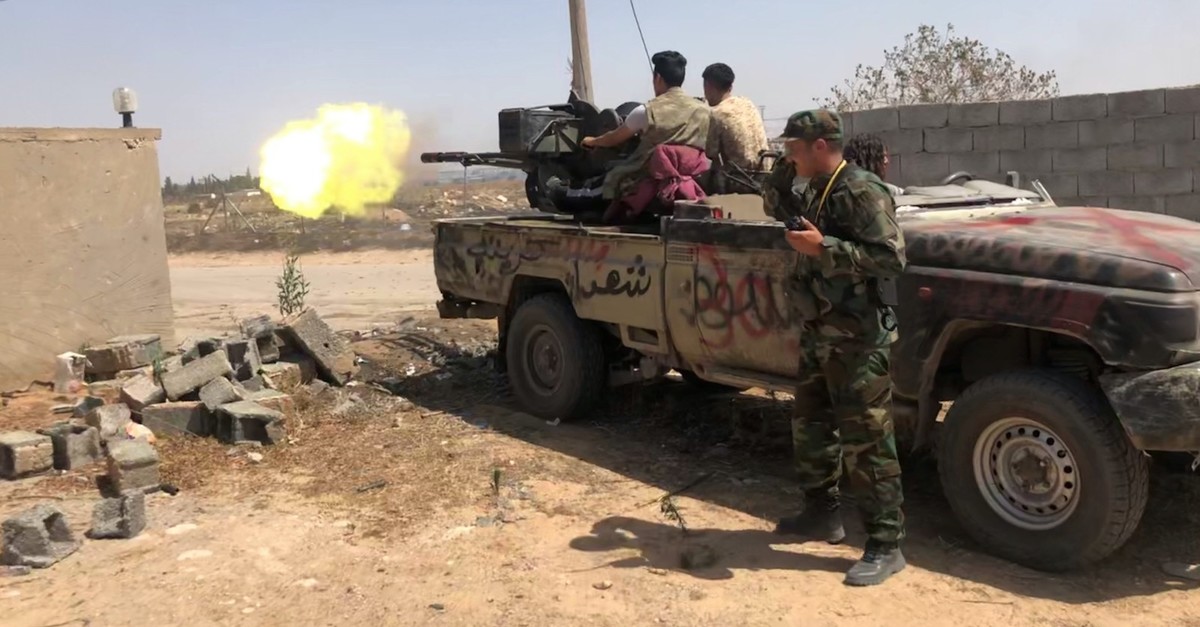 Members of the Libyan internationally recognised government forces during a fight with eastern forces, Tripoli, June 22, 2019.
by Elif Binici - Mustafa Kırıkçıoğlu Aug 08, 2019 12:33 am

The changing battleground dynamics in Libya have helped U.N.-backed government's forces to regain control of strategic towns in Tripoli and have enabled them to transform their capabilities from defense to attack, despite widespread regional financial, political and military support for self-proclaimed general Haftar

With only weeks until the initiation of United Nations-mediated Libya peace talks on April 4, the militia loyal to Libyan renegade self-proclaimed General, Khalifa Haftar launched a military offensive to capture the capital Tripoli by undermining all ongoing peace negotiations. With the flush of victory in Gharyan, a gateway town 50 miles south of the capital, his militia, the Libyan National Army (LNA), enthusiastically said that the capital would fall in 48 hours, garnering the support of regional countries and some European and Western powers. However, like many overconfident generals, Haftar failed to realize his dream to triumphantly enter the capital. What was more important was that his militia lost control of Gharyan in a counterattack by the U.N.-recognized Government of National Accord (GNA) at the end of June, inflicting further casualties.

Along with the resistance of locals in Gharyan against Haftar, the firm stance of government forces played a key role in repelling the blatant aggression by the Libyan strongman.

Speaking to Daily Sabah, the top generals of the legitimate government indicated that they do not desire further escalation of the armed conflict between Libyans. Yet, they strongly emphasized that government forces are no longer in a defensive position and are ready to counter any attack by LNA. "Before the Tripoli offensive on April 4, the military was striving hard to prevent fighting between Libyans and to unite military forces in Libya. But after Haftar's attack, the most important mission is to protect the capital and the government," said Mohammed Al-Sharif, the Chief of Staff of the Libyan Army. Appointed in February by GNA, Al-Sharif was part of a mission to end the divergence between military forces belonging to two rival governments in Tripoli and in Tobruk. 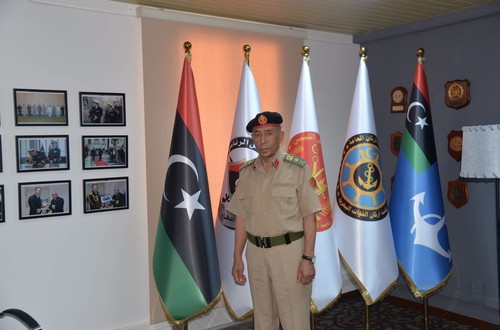 Chief of Staff of the Libyan Army, Mohammed Al-Sharif

Committees from both sides held six meetings in Egyptian capital Cairo over one-and-a-half years to discuss details of a reunion. "It was going positively, and we were on verge of signing a final agreement between military forces. Before the seventh meeting, Haftar stopped contact and attacked Tripoli, cancelling all the processes and negotiations," al-Sharif said.

The retired general's offensive on Tripoli has been widely criticized by international organizations such as the U.N. and aid agencies and has taken a heavy toll. In early July, the World Health Organization (WHO) Libya mission reported that the fight around Tripoli has cost 1,048 lives, including 106 civilians, and injured 5,558 people. Last month, the U.N. also highlighted the deteriorating situation for internally displaced people. More than 100,000 people had to leave their homes and take refuge in Tripoli. Some of them have taken shelter in relatives' homes, but others have been placed in centers – mostly schools where each family has been given a classroom to reside in.

The commander of the Libyan Army's joint operations room and western military zone, General Osama Juwaili, also had an essential role in fending off Haftar's militia, which mostly consisted of mercenaries from countries in the region, including Sudan, Chad and Niger. 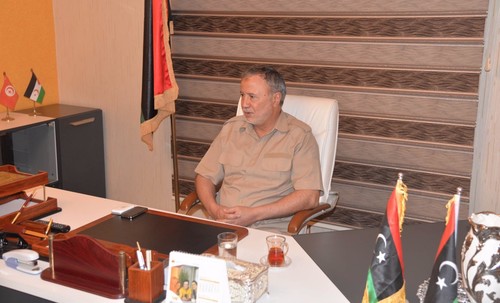 The commander told Daily Sabah that even though Haftar will probably try to retake Tripoli and Gharyan, government forces have the capability of pushing deeper into the militia after the liberation of Gharyan. "For us, the situation changed from defense to attack now," Juwaili said.

In Gharyan, some international powers, particularly France, were seriously involved in the fighting in favor of the self-proclaimed general, according to officials. "French experts helped the Haftar militia during the siege of Gharyan," said Youssef Ibderi, who was elected mayor of Gharyan town in the last municipal council elections in 2014, arguably confirming the engagement of French experts to facilitate Gharyan's capture to advance into Tripoli without disclosing any particular name.

The French role in the Libyan conflict has raised questions, especially after its javelin missiles were found in a LNA base in July south of Tripoli. The French Defense Ministry confirmed that the missiles had been purchased by France, but denied breach of the U.N. arms embargo by supplying them to Haftar. While the ministry asserted that French forces operating in Libya had lost track of them, it did not explain how the missiles had been lost and increased suspicions that Paris is backing the self-proclaimed general on the ground.

The Gharyan mayor also underscored that Sudanese militia were also effective in the siege of Gharyan in an affirmation of reports that claim Haftar relies on mercenaries from Sudan and Chad. The mayor, who came to the Libyan capital after the siege of Gharyan by the Haftar militia, has been able to return to his home town, initiating the process to provide necessary services for the people of Gharyan. Mayor Inderi indicated that a small number of people trapped inside Gharyan protested against the Haftar rule and started to mobilize immediately for the defense of their town. "They did not want Haftar's military rule," he said, adding that bigger forces right now are in Gharyan to protect the gateway city while Haftar is trying to find ways to relaunch another siege.

As Gharyan was liberated from a military dictatorship on June 26, Mayor Ibderi indicated that the local government now focuses on four priorities: internal security empowered by an organized military forces, improvement of military services, electricity and healthcare infrastructure and strengthening of local administration. "It is not a secret that some countries support Haftar, as previously mentioned in the U.N. reports. We found French weapons in Gharyan, of which they said that were sent for training," General Juwaili added. He said that French politics in the region is influenced by "regional countries."

Haftar, who controls large amount of Libyan territory from the east to the south, has been receiving military and political support from regional countries and some Western countries, particularly Egypt, which provides widespread military and political support for Haftar, the United Arab Emirates, which supports Haftar's cause with financial resources, Saudi Arabian religious influence on some Salafi militia groups, primarily through fatwas issued by Saudi Sheikh Rabee al-Madkhali.

Despite ostensible support for the U.N.-backed government GNA in Libya, France's controversial attitude in the battleground and political backing to make Haftar a legitimate actor received criticism from GNA Prime Minister Fayez al-Sarraj and other Libyan politicians. The death of three undercover French soldiers in a helicopter accident in Libya in 2016 led to a rare disclosure of its secret presence in operations in the country. One actor whose position in the Libyan conflict still remains a source of wonder in the country is U.S. President Donald Trump. Previous reports have stated that Trump has spoken to Haftar numerous times. An official at Libya's High Council of State also expressed a concern for any imminent support for Haftar by Trump. With this widespread backing, Haftar is seeking to destroy U.N.-backed GNA and institute a military regime. "They don't support Haftar for his personality but as part of a regional project because they think that democracy in Libya can be dangerous for their regimes," Juwaili said in a bid to emphasize that these countries that support Haftar do not envisage a civil and democratic administration in the country.

Role of drones in clashes

Monetary support from regional countries gives Haftar the opportunity to procure advanced weapons against government forces. One of them, Chinese Wing Loong drones, which carry 8 guided missiles according to Libyan military officials, has been deployed to battleground by LNA forces. "It is one of their most technological weapons. We are doing our best to counter them," Juwaili said. LNA forces use Wing Loong drones to carry out indiscriminate attacks on civilian areas as well as detention centers and airports. On Tuesday, at least 42 people died in a drone strike in southwestern Libya's Murzuq town carried out by Haftar forces. Still, government forces signaled that they have now ability to counter these drones. On Saturday, GNA announced that it had downed a Chinese drone Wing Loong of LNA forces provided by the UAE at the Volcano of Rage in the area between Abu Grein and Al-Wishka, southern Misrata. Although ammunition and all kinds of defense products used by the Haftar militia are provided by regional powers, becoming an influential cause of civilian casualties, mostly women and children, their route into the country is still unknown.