Libyans stuck in a 'no win-or-lose' war 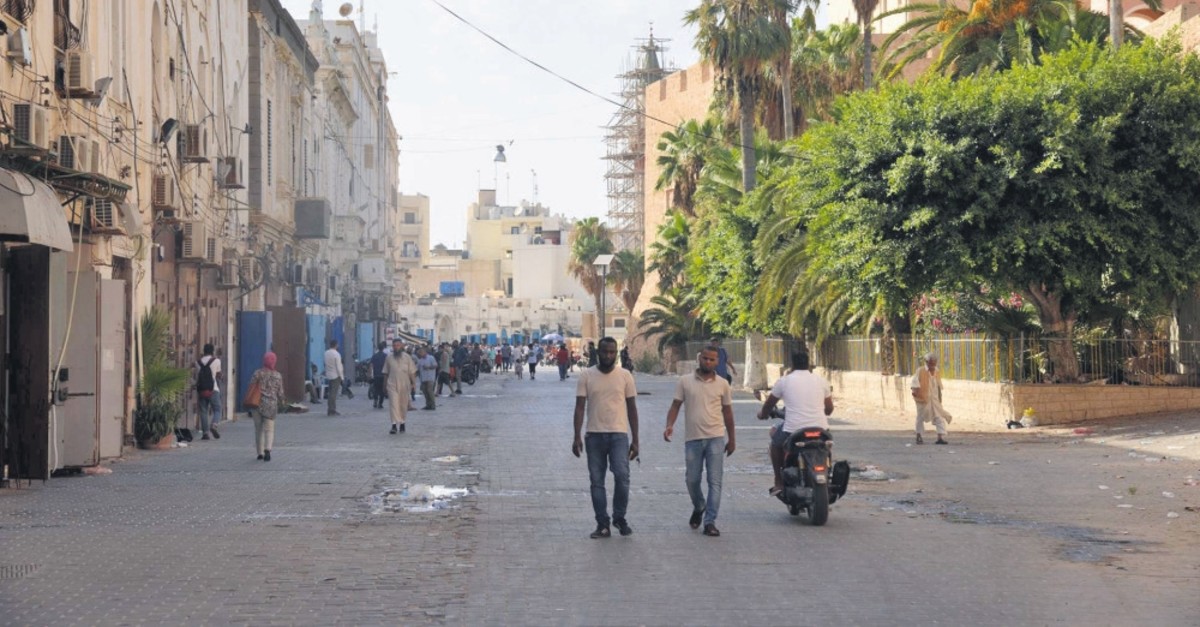 Since the summer of 2014, political power in Libya has been split between two rival governments, in Tripoli and Tobruk, with the latter recognized by the international community before the creation of the Presidency Council in December 2015 with LPA.
by Elif Binici - Mustafa Kırıkçıoğlu Aug 09, 2019 12:16 am

The hope of instituting a civil government, expediting much-needed economic reforms and ensuring political stability in Libya was dimmed by the internal armed conflict, exacerbated by regional engagement and international interference

On Feb. 17, 2011, the people of Libya, who had been subjected to 42 years of the iron-fisted rule of Col. Muammar Gadhafi, took to the streets and demanded their basic human rights. Their rebellion against the colonel was described as the Libyan version of what was dubbed the Arab Spring, a political phenomenon that swayed certain Arab countries ruled by rogue authoritarians, including Tunisia, Algeria, Egypt and Syria. Yet, more than eight years on, the hopes for political freedom, civilian rule and basic human rights have turned bleak. Most of these countries are still suffering either brutal civil wars or political instability. And Libya is no exception. For the last four years, the country has been swamped by an armed conflict. In this fight of Libyans against Libyans, there is hardly a winner as some see it as a proxy war and a clash of several international interests.

"Some regional countries do not envisage a civilian and democratic rule in Libya; they are trying to impose a military dictatorship in our country," High Council of State President Khaled al-Mishri told Daily Sabah during a meeting in his office. He ostensibly referred to the blatant support of Libya's neighbors to establish an undemocratic military regime in the country. "Because," al-Mishri argued, "only military and undemocratic rule in Libya could serve foreign interests."

The dream of Libyans for a civil government are now overshadowed by an armed conflict between the Tripoli government, recognized by the United Nations with the Skhirat Agreement signed by different political factions in Morocco in December 2015, and the rival Tobruk government supporting self-proclaimed General Khalifa Haftar. Destabilized by the huge fissure between the two rival governments, who cannot even agree on the proper share of resources, the North African country has been enormously shaken by the increasingly brutal internal armed conflict. One of the reasons for the protracted Libyan civil war and the failure to institute a stable government is the dispersed centers of power in the country, where there are very few national actors since the vast majority are groups of local players, namely tribes and militia. Since the summer of 2014, political power has been split between two rival governments in Tripoli and in Tobruk, with the latter having been recognized by the international community before the creation of the Presidency Council in December 2015 with the Libyan Political Agreement (LPA). Currently, the country is torn between the Government of National Accord (GNA) – presided over by the Presidential Council – and the Tobruk-based House of Representatives (HoR).

Efforts to finally capitalize on much-needed reforms along with political and economic stability were halted by the civil war that erupted in May 2014 when Haftar managed to convince foreign backers to fight Daesh terrorists in Benghazi and later expanded the attacks into countrywide aggression.

Seizing most Libyan territory from the east to the south with military and political support from Russia, Egypt, the United Arab Emirates (UAE), Saudi Arabia and France, Haftar is now battling GNA forces with the goal of taking full control of the country and instituting a military regime – one that is no different from that of Gaddafi.

Despite ostensible support for the U.N.-backed government GNA in Libya, France's controversial attitude in the battleground and political backing to make Haftar a legitimate actor received criticism from GNA Prime Minister Fayez al-Sarraj and other Libyan politicians. The death of three undercover French soldiers in a helicopter accident in Libya in 2016 led to a rare disclosure of its secret presence in operations in the country. One actor whose position in the Libyan conflict still remains a source of wonder in the country is U.S. President Donald Trump. Previous reports have stated that Trump has spoken to Haftar numerous times. An official at Libya's High Council of State also expressed a concern for any imminent support for Haftar by Trump. With this widespread backing, Haftar is seeking to destroy U.N.-backed GNA and institute a military regime.

Persuading its international supporters to take the Libyan capital in 48 hours, the rogue general launched an attack on the city on April 4, yet has faced widespread retaliation from government forces, particularly from the Misrata militia. The Tripoli aggression, in fact, began only two weeks before the start of U.N.-brokered peace talks for the country, which aimed to ensure political stability and accelerate social and economic reforms. "The war waged against Tripoli by Haftar has been a coup d'état against the financial reforms and Libyan human resources. It has destroyed the Libyan reconstruction process," High Council of State President al-Mishri said.

In an evaluation of the social destruction of the war, al-Mishri pointed out that the war has caused a huge rift among Libyan people, and international media continues to widen this social gap among Libyans. "There is no victorious side in this war because it is a war among fellow Libyan citizens," he said.

Elaborating on the further social and humanitarian cost of the war, he drew attention to the growing number of internally displaced people. Al-Mishri confirmed that more than 100,000 people had been pushed out of their homes. Some of these people have taken refuge in the homes of their relatives, and others were placed in either schools or centers. However, Libya's Education Ministry has begun the evacuation of schools to maintain the structure of the academic year.

In early July, the World Health Organization (WHO) Libya mission reported that the fight around Tripoli had cost 1,048 lives, including 106 civilians, and injured 5,558 people. Last month, the U.N. also highlighted the deteriorating situation for internally displaced people.

U.N. plan for Libya does not provide resolutions

Al-Mishri also stressed that U.N. Libya Representative Ghassan Salamé's three-stage plan proposed to the U.N. Security Council on Monday does not address the realities of the country and his statements targeting the GNA forces are not true. He also argued that Salamé's meeting with Haftar caused frustration among Libyans. Libyan citizens held a protest on Wednesday in front of the U.N. mission's headquarters in the Janzour district, west of Tripoli, to demand the expulsion of the U.N. envoy to Libya. The protesters carried banners saying "Salamé get out" and another saying "Salamé is imposing criminals on the Libyan people."

On July 29, the U.N. envoy to Libya laid out a three-part peace plan for the conflict-stricken North African country to bring warring parties to the political process again. The plan includes a truce among warring parties during Qurban Bayram (Eid al-Adha) – from Aug. 9-14 – and concurrent confidence-building measures, such as prisoner exchanges. The second step is a high-level international conference to agree on a commitment to end the violence and enforce international humanitarian and human rights law against belligerents. The third step is a reboot of the proposed National Conference in the form of an international meeting of influential Libyans to discuss political, security and economic elements.

Al-Mishri however emphasized that for any truce to take place Haftar forces first need to go back to where they come from, the eastern part of the country. "Otherwise, the further aggression will be a disaster for the country," he said.

The president of the Libyan High Council emphatically remarked that the international community is not concerned about the protracted fighting in Libya, where fellow citizens took each other's lives. Their main concern is to stem the flow of migration from Africa into their territories and control the flow of oil trade. Although Libya's oil production, which has fallen to 950,000 barrels per day this month from 1.2 million in June, may not significan​tly affect market dynamics, it is located on an important route for energy markets.

Pressure on Libyans to force them into a solution

Emad Elbannani, a member of Libya's Justice and Building Party established in 2012 as part of the democratization efforts in the country, also underscored that Libyans are fighting not their own war, but somebody else's war. "Who is creating the war? International interference and regional politics only exacerbate the situation," he said.

In reference to the ongoing stalemate in political and military spheres, Elbannani said: "It is not a war where any party can claim victory. The international community is exerting hot pressure on Libyans to make them accept any resolution it will offer," the politician said. But Libyan citizens, he added, aim to feel that they can have the strength to drive things, and they will never accept any dictated solution."

"Egypt and the UAE tried to market their idea that Haftar will be welcomed in Tripoli. However, the counterattacks by the legitimate government forces did not let the rogue general in. They have now understood that Haftar is not welcome in the capital," he said.

A clash of pro and anti-revolution ideologies

The current war in Libya is also a clash of ideologies that support pro-revolutionary projects and anti-revolutionary aspirations. The countries that tried to help Libyans establish a civil government back the GNA, and those who impose an authoritarian regime provide immense political and military support Haftar.

The inability of different political factions in Libya led to the separation of the government, giving birth to another administration in Tobruk, political expert and journalist Musbah al-Warfeli told Daily Sabah. "In an environment of political instability, anti-revolution forces found the opportunity to insert their own agenda and qualify the administrative attempts thanks to the regional support," he remarked. These anti-revolutionaries only design military rule in the country, he explained, and added: "That kind of regime will be no different from what we rebelled against eight years ago."

In a bid to illuminate the Libyan situation, the Libyan journalist stressed that Libyans are not fighting their own war but instead a war of different projects designed by outside intervention. "The administrative weakness made it possible for foreign partners to design Libya's future for their own initiatives," the Libyan expert noted. When asked about what is necessary to ensure stability in Libya, he stressed the importance of a transparent U.N.-mediated process but warned against the weakening structure of the U.N. and underscored that the U.N. no longer has the same power it had in the 1940s.