Witnesses of Idlib catastrophe describe horror as humanity fails them 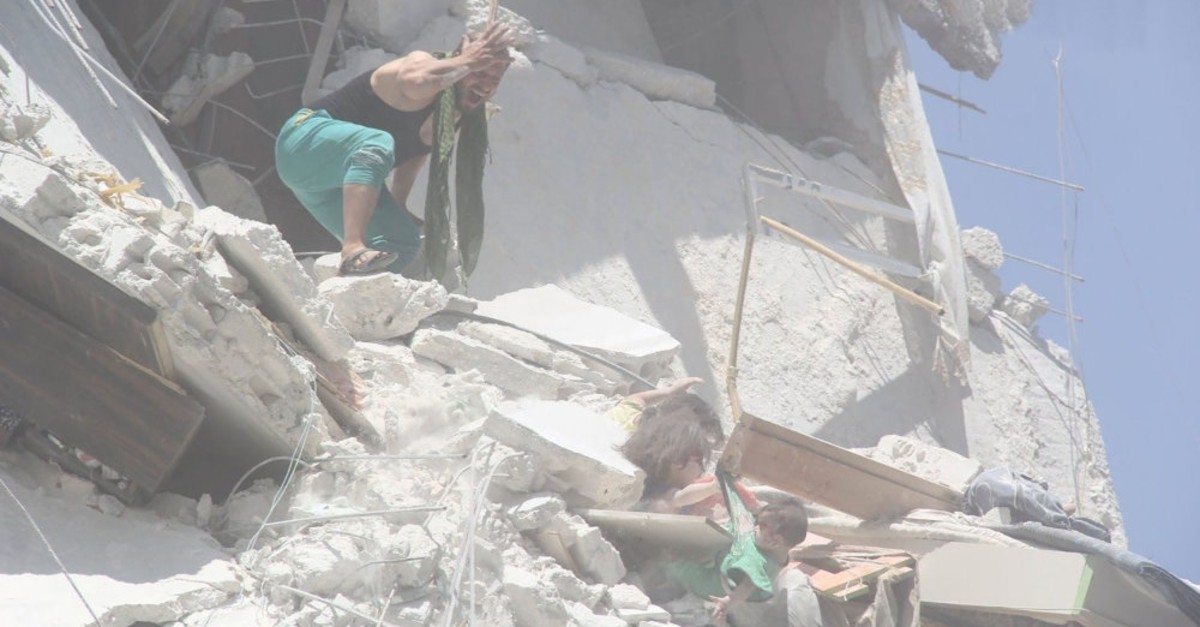 The iconic photograph of two siblings and their uncle, struggling to survive among the ruins of a building attacked by regime forces, reveals once again the failure of humanity in the face of the crisis in Idlib

It was about the time that the violence in northwestern Idlib province was gradually turning into a mere headline for media outlets, rather than a humanitarian crisis, when an iconic photograph surfaced last month showing two siblings and their uncle struggling to hold on to each other to survive following a regime attack. The photograph has become a turning point in the perception of the crisis in Idlib, which was under the heaviest regime attack since April: It not only portrayed real human struggle, a tragedy that costs children's lives, but also showed once again the failing of humanity, whose constant indifference allows to violence to escalate.

"When I entered the house, I saw Riham, 5, and Revan, 3, [two of the siblings] stuck under the ruins. Tuka's [the other sibling who is 18 months old] shirt was attached to a screw and Riham was trying to keep her sibling alive by holding her hand under the ruins," said Abdulhalik Hassun, the uncle of the siblings, remembering the horrors of the moment. The photograph, published on July 26, revealed one of the most historic moments of the Syrian war, specifically the situation that Idlib had been in, in the last few months. It showed Hassun calling on the little girls who were holding each other in the ruins on the fourth floor of a building. While Hassun managed to save Tuka, Riham, Revan and their mother lost their lives as the concrete block collapsed. Hassun first saved Amina, the oldest of the sisters, who told her uncle that her siblings were on the balcony, trying to survive. Then, Hassun entered the building and witnessed the scene.

"Thanks to Riham, we managed to save Tuka. However, we failed to save Riham and Revan from the place where they were stuck. After a while, the concrete block that they were on collapsed. The children lost their lives at the hospital. My brother's wife was killed immediately after the attack," said Hassun, noting that the attack ruined a household with six members.

Idlib, home to 1.5 million people, is the last opposition enclave in Syria. Last Thursday night, Damascus declared a cease-fire in Idlib's de-escalation zone when Turkey, Russia and Iran, the three guarantors of the Astana peace process, met in the 13th meeting in Nur-Sultan, the capital of Kazakhstan, for technical talks before the trilateral Astana meeting, which will be held in Istanbul this month. Yet, the Syrian regime launched military airstrikes on northwestern Idlib province on Monday, effectively ending the cease-fire.

Last year, President Recep Tayyip Erdoğan and his Russian counterpart Vladimir Putin reached the Sochi agreement on Sept. 17. According to the agreement, the cease-fire in the Idlib region was to be preserved with the withdrawal of heavy arms and radicals from the region. The first meeting of the Astana process was held in Turkey in January 2017 to bring all warring parties in the Syrian conflict to the table to facilitate U.N.-sponsored peace talks in Geneva.

Since the Sochi agreement was inked last year, nearly 750,000 civilians have been displaced during violations of the cease-fire. Furthermore, the Syrian Network for Human Rights announced that as a result of attacks on the de-escalation zone by Russia and the Assad regime since the end of April, 781 civilians have lost their lives, including 208 children and 140 women.

Besides for constant civilian deaths, civilian infrastructure, hospitals, markets and schools have also been destroyed, leaving the nearly 4 million people living in Idlib in desperate conditions. Last week, Medecins Sans Frontieres (MSF) even warned that this could lead to an outbreak of diseases.

Since his brother left Idlib following the incident together with his remaining children and resettled in a faraway village, Hassun said that he still lives there since he has nowhere else to go.

We, as Sabah daily, reached out to Hassun's brother Emcet Abdullah via phone call, who

was working at a bazaar in Eriha and ran to his home immediately after he heard of the attack and never returned again after that.

"Amina left the hospital recently. Her treatment continues. Tuka is also healthy. I could not even tell my children that their siblings and mother have died," he said.

He noted that if the world had not been indifferent to their crying from Idlib, today, Riham and Revan would still be alive.

"We already came here from Aleppo. It is really hard to live in these conditions for all the residents of Idlib. We live with the fear of death every day," Hassun said and asked, "Will we be able to return home when we go outside or will we find those we left at home alive when we return?"

"Do you know how is it to live with this fear every day?" he asked.