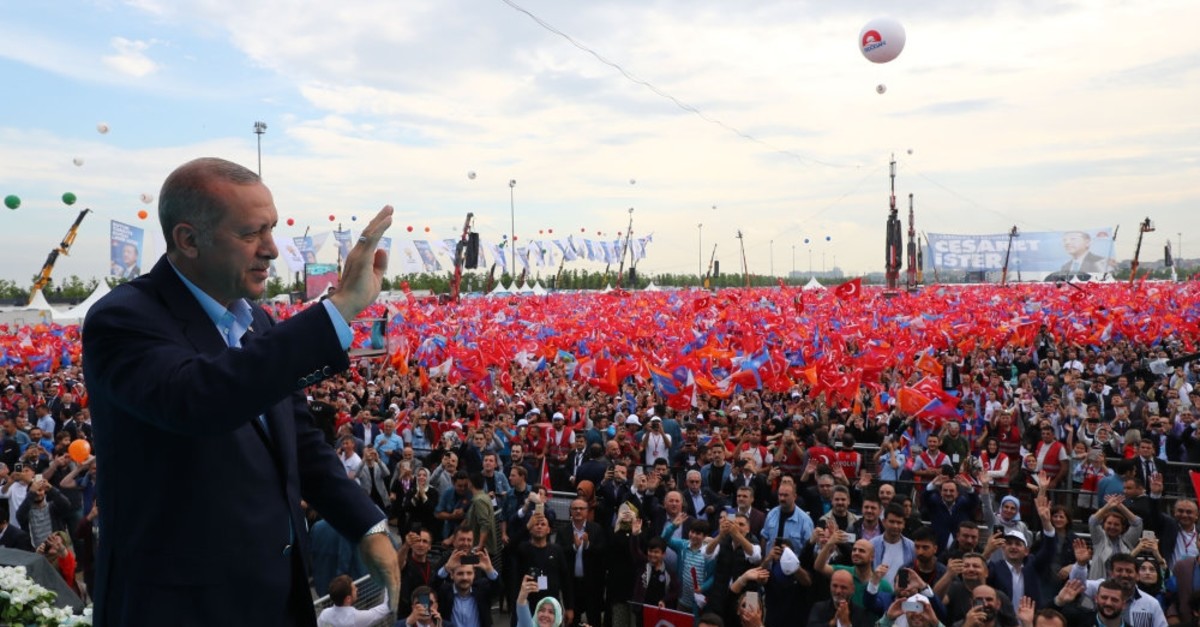 With millions of members, AK Party's voter base includes many people from different political backgrounds. Since winning the majority of votes in its first election, it has sequentially increased its number of voters in all subsequent elections.
by Daily Sabah Aug 15, 2019 12:25 am

Guiding numerous reforms and transforming Turkish politics since its foundation in 2001, the AK Party is working to lead new reforms in line with the country's 2023 targets

Wednesday marked the 18th anniversary of the foundation of the ruling Justice and Development Party (AK Party). Founded on Aug. 14, 2001 under the leadership of Recep Tayyip Erdoğan, the AK Party has become the most successful political party in modern Turkey's democratic history with its successive election victories and has led reforms that upgraded the country's democracy and economy standards. Transforming Turkish politics for the last 18 years, the AK Party has been preparing to lead new reforms that will enable Turkey to reach its 2023 targets. Only one year after its foundation, the AK Party brought enormous achievement in the first general elections, garnering 34.3% of the vote in the Nov. 3, 2002 elections and earning 363 seats in Parliament.

Since then, the AK Party has never lost an election. In the last 17 years under the AK Party administration, Turkey has witnessed rapid development in many areas including economy, democracy, individual liberties and rights, health and educational services in a stable political environment. President and party Chairman Recep Tayyip Erdoğan yesterday released a message to mark the 18th anniversary of the AK Party's foundation. Underlining that the AK Party is not only a political party, it is a people's movement, Erdoğan said: "My friends, yesterday is done and gone. Today is a new day. This is the day to take to the roads again for a bright Turkey and our future." Erdoğan also stated that the AK Party will continue to lead Turkey's reforms in line with the country's 2023 targets.

Treasury and Finance Minister Berat Albayrak also released a Twitter message and said: "The AK Party is the party of brotherhood, fidelity, solidarity and 82 million people including women and men, youth and the elderly, of all origins and all segments." The official celebration ceremony for the party's 18th anniversary will be held on Aug. 23 at the party's headquarters in Ankara. The celebration events will be organized under the theme "With the love of Turkey, our age is always 18." At the celebration Erdoğan will give a speech to audiences. Also, AK Party officials and supporters shared their Twitter messages to celebrate the party's 18th anniversary with the hashtag "YaşımızHep18" referring to the theme "Our age is always 18." It was also reported that the meeting of the party's Central Decision and Administrative Board (MKYK) will be also held on the same date.

AK Party has won all elections since foundation 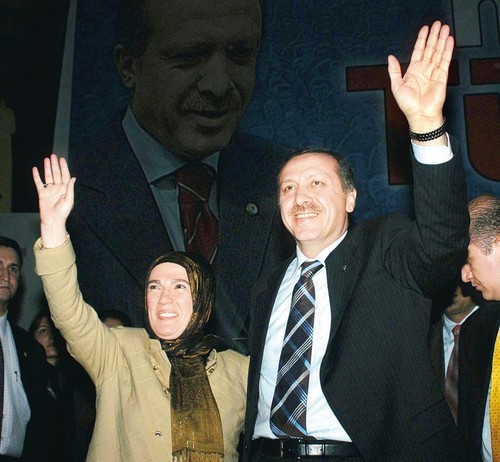 Domestically, ever since the establishment of the modern Turkish Republic in 1923, Ankara has hosted different governments, including coalition and military administrations. Unfortunately, Turkey had been the victim of daily internal political rivalries between political parties in most of its modern history up until 2002. It seemed that each government brought its own plans, policies, initiatives and so on. Hence, Turkey could not break the chains holding it back from becoming a true regional and global influencer due to discontinuity, inconsistency and incoherence in both domestic and foreign policies with other countries. However, there have been remarkable changes since 2002 with the continued election victories of the ruling party. The party so far has participated in six general elections, in 2002, 2007, 2011, June 2015, the November 2015 snap elections and 2018 snap elections, winning 34.3%, 46.6%, 49.8%, 40.9%, 49.5% and 42.5% of the vote, respectively, and coming in first in four municipal elections in 2004, 2009, 2014 and 2019 with a 41.7%, 38.4%, 42.9% and 44.3%, respectively.

Since its establishment, the AK Party has been put under heavy pressure with closure cases in 2002 and 2008. The party narrowly survived the 2008 case, as six of the 11 judges in the Constitutional Court voted in favor of closing the party. Seven votes were required to close a party.

The military tutelage system often caused party leaders headaches, as well. A Turkish Armed Forces (TSK) memorandum given to the AK Party on April 27, 2007 on the internet shortly after the AK Party's announcement of its candidate for president, was the first of its kind. The memorandum was perceived as a signal of a pending coup.

However, after the AK Party's landslide election victory in the July 22, 2007 elections, the deadlock of opposition over presidential elections ended. 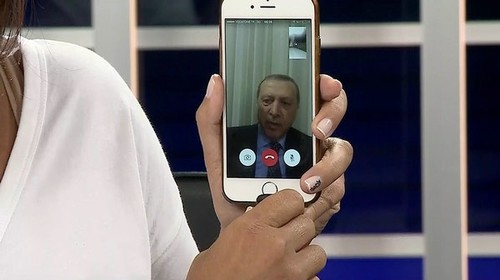 President Recep Tayyip Erdoğan, speaking on live television through FaceTime, called on citizens to resist the coup attempt on July 15, 2016.

The AK Party and President Erdoğan survived a bloody coup attempt on July 15, 2016. There is no doubt that the coup attempt of July 15 has marked its place in Turkey's recent history as one of the, and maybe the most, significant challenges the Republic has faced. The official numbers on the night and its aftermath saw 251 civilians killed during the coup attempt and thousands charged afterward for having links to the terrorist group behind it, the Gülenist Terror Group (FETÖ). During the coup night, President Erdoğan, speaking on live television through FaceTime, called on citizens to resist the coup attempt.

The party's dynamic structure revives itself when necessary

Also, Erdoğan had resigned from party membership in 2014 as he geared up for the presidential elections. After constitutional changes were approved in the 2017 referendum, the president applied for membership to the AK Party, and he was re-elected as party chairman on May 21, 2017.

The AK Party is known for its dynamic structure that revives itself when necessary. Erdoğan has led a rejuvenation process in the party before, repeatedly speaking of "metal fatigue" within the party. As part of the rejuvenation efforts, a number of party members and mayors of key provinces resigned.

Having millions of members, the party's voter base also includes millions of people from different political backgrounds. Since it won the majority of votes in its first election, it sequentially increased its voters in all subsequent elections. Therefore, it is understood to be quite possible and normal for some party members to have lost their energy to perform at a high level.

Bringing into action many significant reforms for religious and minority rights in the last 17 years, the AK Party and Erdoğan have initiated many projects in recent years. Among these reforms and projects are the groundbreaking for an Assyrian Orthodox church, the return of land to the foundations of minorities and a religious ceremony at the Sümela Monastery.

The AK Party Human Rights Directorate announced the works it has implemented as part of the "silent reforms" for religious and minority rights: In the year 2010, a religious ceremony at the Sümela Monastery located in Trabzon's Maçka district, lying in the Pontic Mountains range at an altitude of 1,200 meters, was organized after 88 years. The monastery, which welcomes 600,000 visitors annually, is also part of the UNESCO World Heritage List.

Moreover, Rum Publishing, which had a vast audience in the Ottoman period and continued during the Republic but halted its activities in the late 1950s was revived again in June 2012 under the name İSTOS. Later in 2015, the Alagöz village's name in the Midyat district of southeastern Mardin province was changed into its original Assyrian name "Bethkustan." Also, the first commemoration of Holocaust victims in Ankara was conducted in 2015. The same year, the Jewish holiday of Hanukkah, which is celebrated between Dec. 2 and Dec. 10, was cel

ebrated in a public area by Jews. Approximately 18,000 Jews live in Turkey, most of them in Istanbul. Some 1,015 pieces of land were returned to minority foundations. Significant financial support was given to minority schools, while the Ministry of Education prepared Armenian school books.

At the beginning of the month, the president inaugurated the foundation-laying ceremony of Istanbul's new Assyrian church, which is also a first. The new church will mark the first time a church is built from scratch in the Republic era and is expected to be finished in two years. There are 25,000 Assyrian Christians in Turkey, approximately 18,000 of whom live in Istanbul, according to unofficial figures.

Minority and foreign schools have the right to carry out education in their own languages, among these schools are French, German, Italian, Austrian and private American schools. Both foreign and Turkish citizens attend these schools. There are also Rum, Armenian and Hebrew schools. According to the data of the European Commission, there are seven institutions for preschool education, 24 for primary school education, 21 for secondary school, 11 minority high schools and a further 78 international schools of different education levels.

The AK Party also lifted the hijab ban that prevented many women from pursuing a higher level of education or working in public institutions.

The headscarf ban in Turkey started to be implemented in the 1980s, but became stricter after 1997, when the military forced the conservative government to resign in an incident later dubbed as the Feb. 28 "postmodern" coup.

It was gradually lifted by the AK Party for students in universities after 2010, while the ban for public employees was also lifted in 2013. The AK Party government led by then-Prime Minister Recep Tayyip Erdoğan became a pioneer in terms of resolving the country's headscarf issue, which left millions of Muslim women in a dilemma to make a choice between their faith and education or professions. Through the democratization package aiming to guarantee democratic rights for all citizens, the government passed laws and made amendments to the existing ones to ensure women wearing headscarves could receive education and work as public servants.