18 years on, AK Party continues its journey with revival process on the way 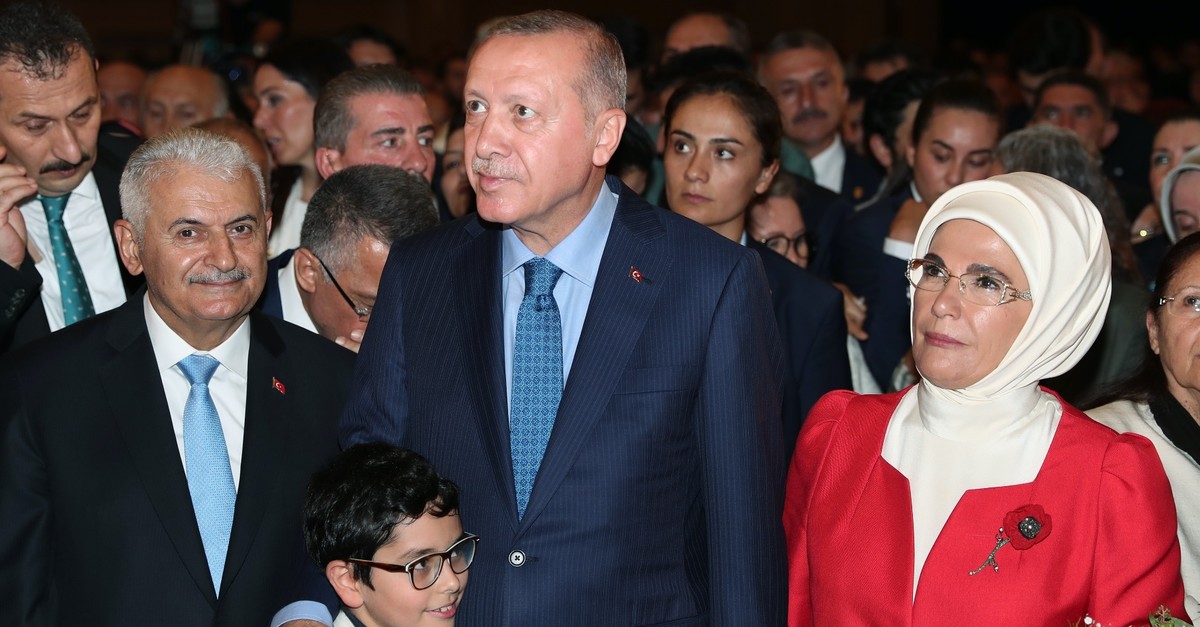 The ruling Justice and Development Party (AK Party) celebrated the 18th anniversary of its foundation with a series of activities on Friday. It paid tribute to the party's past full of election victories while highlighting the rejuvenation process that would take the party even further in the future. Speaking at the ceremony Friday, President Recep Tayyip Erdoğan first expressed his gratitude for all of his comrades from every rank of the party who have been alongside him for the last 18 years. "The honor of being a part of this family [AK Party] alone is a great legacy to transfer to our children," Erdoğan said.

Expressing that one of the greatest successes of the AK Party is to be able to change itself in accordance with the necessities of the time, Erdoğan said that as the world changes, the party changes alongside it as well.

"As AK Party, we will continue to enlighten the path of our country for the upcoming years as we did for past 18 years, especially when it comes to improving our democracy, economy and security," the president highlighted.

"Our only duty is to serve God and the people," the president underlined, adding that the cause of AK Party is much bigger than the party itself.

"I believe that we will be able to say in the 20th, 30th, 40th anniversaries that we have been serving only God and the people as a party," he said.

He also reminded listeners of the successes of the party for the past 18 years, saying that since the foundation of the republic, the AK Party era has achieved the most remarkable improvements for the country.

"AK Party only would lose if it stops being itself," he added.

"From tutelages to terrorist organizations, from international threats to domestic ones, we had to fight against many things. Thank God, we've managed to defeat them all. Thanks to our policies, it is today much harder to tackle down Turkey through tricks compared to the past," Erdoğan said, adding that the country is able to do and say whatever it wants both at the table and in the field today as a strong regional actor and manages to achieve the results it desires.

"Our manifesto is the application [of the ideas]. Our achievements talk on behalf of us," he said.

Touching upon the infrastructure works of the party's rule, especially regarding transportation, the president said that the reason why people criticize the party's policies despite all these successes is the fact that they prefer to pretend to be blind rather than acknowledging them.

Regarding the developments in the Eastern Mediterranean, Erdoğan underlined that Turkey acts only upon its own interests and will continue to do whatever it takes for its national concerns.

Turkey has consistently contested the Greek Cypriot administration's unilateral drilling in the Eastern Mediterranean, saying Turkish Cypriots also have rights to the resources in the area. The unilaterally declared exclusive economic zone of the Greek Cypriot administration violates part of Turkey's shelf, particularly in Blocks 1, 4, 5, 6 and 7. The Turkish-flagged drillships commenced their offshore drilling operations in the region this year.

"The upcoming period is a period that we will prove our success even more," he underlined, adding that the party's doors are open to everyone for all time. He also invited everyone who is willing to be a part of the party to participate in the upcoming congress process of the party.

PEOPLE'S ALLIANCE TO CONTINUE WITH STRENGTH

"We will do our best to make People's Alliance hold fast," said Erdoğan, referring to the partnership with the Nationalist Movement Party (MHP), saying that the alliance proves that only through common interests can cooperation can be achieved.

The People's Alliance between the Nationalist Movement Party (MHP) and the AK Party was formed ahead of the June 24 parliamentary and presidential elections. The alliance received a majority in Parliament, while their presidential candidate, Erdoğan, also won the election by 52.6% of the vote. Since both parties consider the results of the June 24 elections as successful, they continued their alliance in the local elections. When it comes to the presidential system, Erdoğan said that the people embraced it very well as they expressed their support with the referendum back in 2017.

"Of course, as with every system, the presidential system also has its parts that can be improved," Erdoğan said, adding that they have given a start to a work on improving the system even further.

Turkish voters narrowly endorsed an executive presidency in the April 16, 2017 referendum with 51.4% of the votes. The official transition to the new system took place when Erdoğan took the oath as president in Parliament after the June 24, 2018 election.

AK PARTY IS A NATIONAL MOVEMENT

"The AK Party has turned out not as a party movement but a national movement," he added. Reiterating the political atmosphere at the time of AK Party's foundation, Ünal said there was a system where people appointed by the military dominated the country's elected representatives. There are of course still some problems in the country, Ünal said, adding that development comes through solving these problems, which is why the presence of some problems is normal.

"Turkey no longer has the problems that existed back in 2004, 2005. Turkey has some new problems today. And there is a political movement that has the capacity to solve these problems as well," he underlined.

Ünal also underlined that during the 17 years of its 18-years-long history, AK Party has been the ruling party, which is quite remarkable in the history of political parties. He further expressed that no matter what the opposition figures say, the AK Party will continue to believe in itself.

"The reason the AK Party has managed to survive through entire crises and was able to manage them for 17 years is the fact that it's capable of change and learning from change," said Ünal, adding that there are no other parties in Turkey with similar capabilities. He said an exclusive "time tunnel" is being prepared on the occasion of the anniversary. It will feature all the prominent actors of the party as of 2001 and the year-by-year history of the party.

In addition, a special anthem and a movie have also been put together. "Everyone who sees themselves as a member of the AK Party family is welcomed," said Ünal.

Founders of the party, deputies, mayors, members of the Central Decision and Executive Board (MKYK), provincial chairmen, members of the women's and youth branches, and ministers also attended the event. Last Wednesday marked the 18th anniversary of the foundation of the ruling AK Party. However, due to the Qurban Bayram (Eid al-Adha), the administration decided to postpone the ceremony for a week.

Founded on Aug. 14, 2001 under the leadership of Erdoğan, the AK Party has become the most successful political party in modern Turkey's democratic history with its successive election victories and has led reforms that improved the country's democracy and economic standards.

Speaking Friday on the party's successes, Fatma Betül Sayan Kaya, deputy chairman of the party, pointed out the party's improvements in eliminating poverty and fight against the corruption. She added that the health services of the country have been improved during the AK Party rule as everyone has free access to it.

Turkey took steps to rejuvenate its struggling health care system in recent years. Hospitals run by the Health Ministry and Social Security Institution (SGK), formerly known as the Social Insurance Institution, were merged to prevent overcrowding. The government also reduced red tape in the treatment of patients with social security at teaching hospitals run by universities.

Existing hospitals have also been modernized, and more than 500 new hospitals have opened across Turkey. Erdoğan, who previously served as the country's prime minister, pioneered the "city hospital" concept, calling it his "dream."

Transforming Turkish politics for the last 18 years, the AK Party has been preparing to lead new reforms that will enable Turkey to reach its 2023 targets. Only one year after its foundation, the AK Party brought an enormous achievement in the first general elections, garnering 34.3% of the vote in the Nov. 3, 2002 elections and earning 363 seats in Parliament.

Since then, the AK Party has never lost an election. In the last 17 years under the AK Party administration, Turkey has witnessed rapid development in many areas, including economy, democracy, individual liberties and rights, health and educational services in a stable political environment.