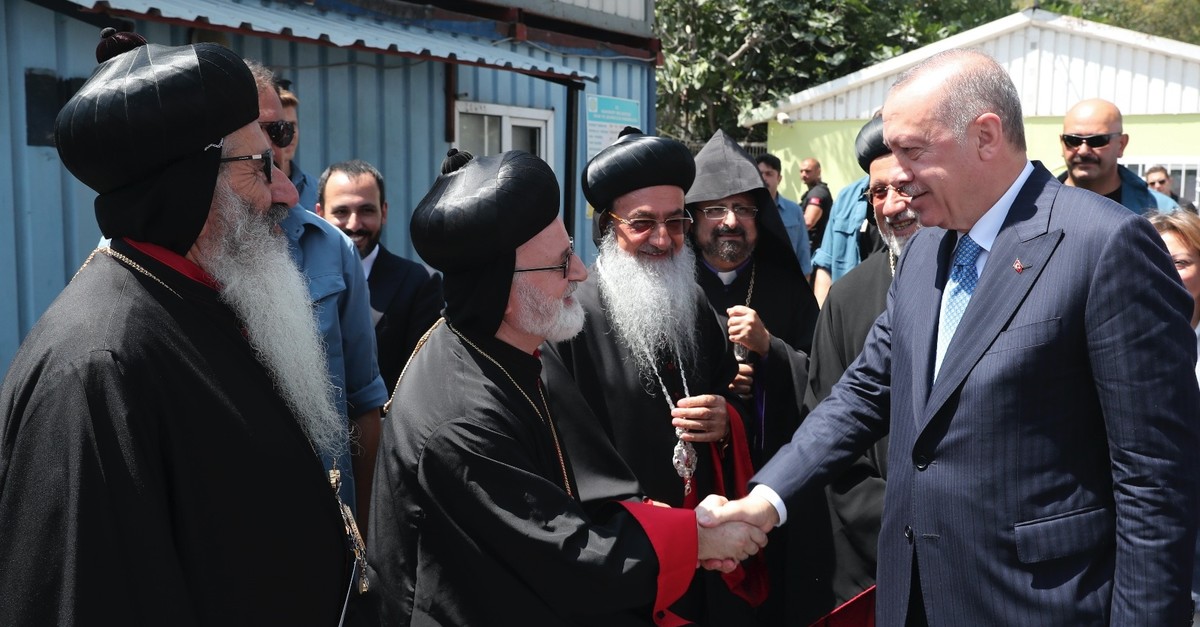 Minorities welcome the recent developments in Turkey in terms of minority rights as they enjoy freedom of worship, education and property rights

Turkey's minorities have been welcoming the developments that took place within the last 17 years. This period is regarded as the best era in the Republic's history in terms of minority rights since they enjoy freedom of worship and are able to provide their own education services. Speaking to a Turkish daily, Moris Levi, a prominent figure of Turkey's Jewish community, said that Turkey, especially in the last 20 years, has become a country that gives priority to the freedom of worship. "Any Christian or Jew can perform his or her own prayer at temples that are close to them. They do not have to receive any permission. Some prayers can even extend to the outside of the temple," Levi explained.

Yet, according to Levi, the fact that freedom of worship is acknowledged by laws and the public consciousness does not mean that all communities can worship comfortably to the fullest extent. "There are also some other reasons. Today, any mosque, synagogue or church receives support from the state for its enlightenment. Today it is not too hard to make a synagogue, church or mosque. The local administrations give support regarding this issue. Yet, making the building is not enough. That building still needs care to stand. The church, synagogue and mosque need to collect grants," he said.

Turkey has around 18,000 Jews according to the Turkish Jewish community and their population is concentrated in Istanbul. Levi says the cultural diversity the community brought was important for society. The community had a higher population but numbers dwindled in the 20th century as most migrated to Israel after its establishment, while an unfortunate pogrom in the 1950s led some to leave Istanbul.

"Today," Levi added, "some Christian and Jew communities that have been shrinking a lot have been suffering in enabling their temples to stand. However, the imam of the mosque receives its salary from the religious affairs administration while a padre from a church or a rabbi from a synagogue does not have that option.

He can receive his salary only from the grants his community provided."

Levi underlined that when the communities shrink, they have a great problem in collecting grants. "This prevents prayers from being at the desired level," he indicated.

"We are at a point in the last 17 years that we could not even imagine before," Sait Susin, the head of the Assyrian Archaic Foundation, also underlined, pointing at the developments that took place during the ruling Justice and Development Party's (AK Party) era.

"The notion of a minority is same in Turkey, and Istanbul, with the notion of minority in the other parts of the world," Susin said, underlining that the democratization process of the country contributed to minority rights greatly as well.

Mentioning the return of the properties, he said that thanks to the act that was issued in 2008, all minorities were finally able to take a deep breath.

"In these last 17 years, we have been able to reach any level of the state at any time, express our problems, demands and for the most part, we reach a solution," he underlined.

but to raise a Christian or Jewish man of religion one either has to be trained through old school master-apprentice relationship or he has to be sent abroad for a theology education. This necessitates a monetary fund. Especially the smaller Christian communities in Anatolia are neither able to make their temples stand nor provide enough men of religion."

Turkey, home to a mixed Christian community of Orthodox, Catholic and Protestant faithful who trace their roots before the centuries-old Ottoman rule, is also regarded as the birthplace of St. Nicholas, a bishop recognized as a saint in the Orthodox world whose charitable ways inspired the modern-day image of Santa Claus.

The lack of monetary funds also causes security weakness, Levi said. Underlining his expectations regarding the security of the synagogues, Levi said that in last 30 years, the synagogues have been attacked a few times.

"The security officials have been protecting the Jewish and Christian temples with a great effort, especially during the religious ceremony days. But still, there is the need of a service staff who would know the members of the community and always be at the front door to assist the security officials," he said.

"We do not have any problem regarding the freedom to worship," Susin also underlined, adding that they never had such a problem during the Republic's history. "On the contrary, for the last five-six years, when we organize an event in our churches, the security forces demand the dates from us beforehand and send reinforcements to that place.

"Thank God, there have not been any unwanted incidents yet," he added.

Levi also highlighted the fact that many Armenian and Greek schools continue to provide education in Turkey in a healthy way.

"The Jews are providing education in Ulus in their own language, in addition to English. The Turkish Ministry of Education acknowledges their diplomas and even provides support. For instance, in case of a demand, the ministry finances the teachers of the courses like history, geography, social sciences and Turkish."

Also emphasizing that the biggest problem regarding education is the lack of monetary funds, Susin said that in contrary to the Lausanne Treaty, for the most part of the Republic's history, the Assyrians have been prevented from establishing their own schools.

"They have interpreted as if only Armenians, Greeks and Jews can open their own schools. However, in 2013, thanks to our efforts on the issue, the authorities from the Ministry of Education expressed that this problem can be solved through the court and with a court decision we have been able to open our schools as well," he said.

Inauguration of Assyrian church a milestone in Republic's history

"This is a first in the Republic's history. If there wasn't for the [president's] will, it would not have been possible for us to lay this foundation," he said.

For the first time in the Republic's history, foundations of a church have been laid with the participation of Erdoğan. The construction of Istanbul's new Assyrian Orthodox church will be completed in two years, Erdoğan said at the foundation-laying ceremony at the beginning of the month.

"I see Mor Ephrem (Saint Ephraim) Assyrian church as a new richness for Istanbul," the president said in the city's Yeşilköy district on the European side. "Like all their other issues, meeting the worship needs of the Assyrian community, the ancient children of our geography, is the duty of the state of the Republic of Turkey," Erdoğan said.

"We are a nation which has been ruling over this region for almost a millennium and Istanbul for 566 years. Throughout this long history, our region has always been the heart of religious, ethnic and cultural diversity, and most importantly of the conscience of humanity," he added.

The new church will mark the first time a church is built from scratch in the Republic-era. The church will be constructed on an empty lot belonging to the municipality near the Italian Cemetery in the Yeşilköy neighborhood of Bakırköy district, which is home to a high concentration of the Assyrian community.

There are 25,000 Assyrian Christians in Turkey, approximately 18,000 of whom live in Istanbul, according to unofficial figures.

Expressing that the return process of the properties of the minorities has been continuing very smoothly Levi said, "The enactment that came out six years ago was giving the minority foundations to get back the properties that were listed in the 1936 declaration. Within this scope, the foundations expressed their demands to the general directorate for foundations regarding their properties."

Levi said that within two years, there have been hundreds of files issued and some were accepted and others were rejected.

"There are 50 properties that were given back to the Assyrian community within the last year alone," he added.

Properties once owned by religious foundations of Armenian, Greek and Jewish communities were seized as part of discriminating state policies in the past. The properties, ranging from historical buildings and churches to schools, were mostly sold to third parties by the Treasury after their confiscation.

According to Kezban Hatemi, a lawyer and expert on minority rights, minority rights have gained momentum during the 2000s, partially because of Turkey's EU membership process.