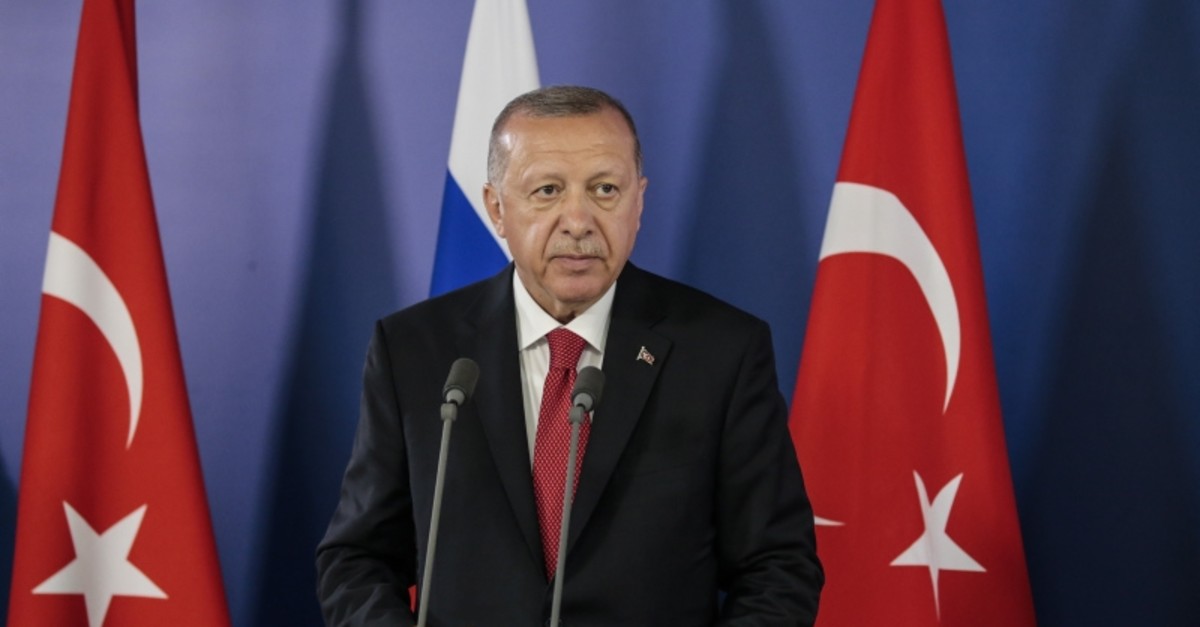 The PKK's Syrian affiliate the People's Protection Units (YPG) terrorists are just pretending to withdraw from areas near the Turkish border and only a small portion of them have actually retreated, President Recep Tayyip Erdoğan told journalists late Wednesday on hi,s way back to Turkey after a visit to Russia.

"Only a few of them actually withdrew," the president said, adding: "The agreement which we have reached with the U.S. is a correct step towards establishing a safe zone and removing the YPG from the east of the Euphrates (river)."

The YPG claimed previously that its militants had started withdrawing from a town near Turkey's border.

The withdrawal encompasses a five to 14 kilometer-wide strip along the border, Mustafa Bali, a member of the terrorist YPG-dominated Syrian Democratic Forces (SDF), said Tuesday.

"The process must not be stalled"

Erdoğan reiterated that Turkey would not accept delays in the plan, comparing it to an earlier deal with Washington to remove YPG fighters from the northern Syrian city of Manbij, which Ankara accused Washington of delaying.

"We will never tolerate a delay like we saw in Manbij. The process must advance rapidly," he said.

To reduce tensions, Turkey and the U.S. agreed on a road map in June 2018 foreseeing the withdrawal of the YPG from Manbij and installing joint Turkish-American patrols, which began last November. However, the process has been sluggish as the terrorist group is still present in the city despite the three-month timetable set for implementing the deal.

"We will never allow the east bank of Euphrates become a safe haven for YPG terrorists," Erdoğan said.

"The U.S. must distance itself from those terrorists," he asserted.

Although the first phase of establishing a safe zone in northern Syria was launched together with the U.S. after a long period of discussions, Turkey is still approaching the issue cautiously due to its previous failed negotiations with the NATO ally.

Erdoğan said this week Turkish ground troops would enter the planned safe zone "very soon", having warned previously that Turkey would mount a cross-border offensive on its own to clear the YPG militia from its border if necessary.

"All the personnel, the armored carriers, all are on the border. That is, we are in a position to do everything at any moment," he said.

The YPG is the Syrian offshoot of the PKK terror group, which has been responsible for the deaths of nearly 40,000 people in Turkey, including many

Turkey carried out two cross-border operations west of the Euphrates River, Operation Euphrates Shield launched in August 2016 and Operation Olive Branch in January 2018, to drive terrorist groups, including the PKK-affiliated People's Protection Units (YPG) and Daesh, from its borders.

While the country liberated northwestern territories from Daesh, it also prevented the YPG from establishing a de facto autonomous region in Syria connecting the northwestern Afrin canton to the Kobani and Jazeera cantons in the northeast, which Ankara describes as a "terror corridor" posing a grave threat to its national security.

The U.S., which has designated the PKK a terrorist organization, still allies itself with the Syrian Democratic Forces (SDF) in Syria, which mainly consist of militants from the PKK offshoot the YPG. Turkey wants YPG commanders removed from the SDF's top ranks and Sunni Arabs, together with non-YPG Kurds, included in the lower ranks.

Row over delivery of F-35 warplanes

"Turkey is not a market for the sale of F-35 warplanes but one of the producers of them," Erdoğan said, regarding the tensions with the U.S. over Turkey's purchase of Russian S-400 aerial defense systems and the former's decision to block the delivery of the Lockheed Martin warplanes.

"If the U.S. fails to deliver, we will definitely consider Russia's Su-35 and Su-57 aircraft as alternatives," he said.