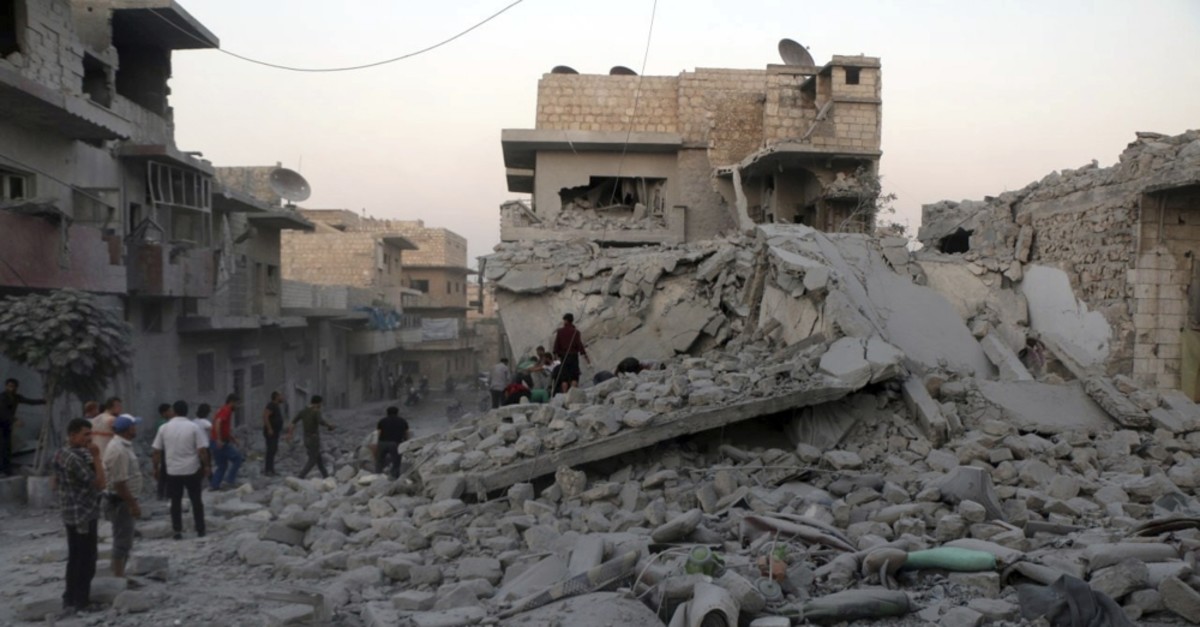 People searching for victims under the rubble of destroyed buildings hit by regime airstrikes in the northern town of Maaret al-Numan, Idlib province, Aug. 28, 2019.
by Daily Sabah with AA Aug 30, 2019 12:15 am

Due to growing concerns over the worsening humanitarian situation in Idlib, the international community calls for ade-escalation of violence. However, the Syrian regime continues to target civilians and residential areas

Despite ongoing efforts by international actors to provide stability and security in northwestern Syria's Idlib, attacks by Bashar Assad regime forces continue to target civilians and residential areas. Recently, 17 more civilians, including five children, were killed in the last two days when the regime hit the de-escalation zone in Idlib, according to local sources. Seven civilians were killed in attacks yesterday by the Assad regime and Russia in northwestern Syria, in an area supposed to be under a cease-fire, according to local reports.

Syrian opposition aircraft monitors said four civilians were killed in a regime airstrike in Maar Shamshah and three others in a Russian airstrike on the village of Alteh, both in the Idlib province, the site of a de-escalation zone.

On Wednesday, the regime's airstrikes in Idlib's Maarat al-Numan killed 10 civilians in all and at least 23 others were injured, said a source with the Syrian civil defense agency, known as the White Helmets.

Experts argue that the regime's advance on the ground might trigger further civilian losses and migration of the residents.

Since Turkey and Moscow hammered the Sochi deal on Sept. 17, some 950,000 civilians have been displaced

. During the same period, a total of 1,282 civilians have been killed by Russian or regime airstrikes; among them were 219 women and 341 children.

Meanwhile, President Recep Tayyip Erdoğan held a phone call with U.S. President Donald Trump early yesterday to discuss bilateral ties and recent developments in Syria, particularly in Idlib province. Turkey's Presidential Communications Directorate stated that the two leaders emphasized that both countries agreed on protecting civilians in Idlib against attacks by the Bashar Assad regime and cooperating to avoid a new humanitarian crisis in the region. Turkey has ramped up its diplomatic efforts to de-escalate the situation in Syria's Idlib, the last major opposition stronghold in the war-torn country, as the intense violence of the regime forces in Idlib has shattered a deal reached last September between Russia and Turkey to establish a buffer zone.

Despite eight months of calm provided by the Sochi deal between Turkey and Russia in September, the regime, backed by Moscow, intensified its attacks starting April 26 under the pretext of fighting al-Qaida-linked Hayat Tahrir al-Sham (HTS) terrorists holed up in Idlib. Since then, the situation has gotten even worse, taking more civilian lives.

The diplomatic traffic of Turkey has been on the rise as Erdoğan also met with Russian President Vladimir Putin in Moscow on Tuesday, where both leaders sought common ground on halting the deadly fighting in northwestern Syria.

Addressing the bilateral talks, Ankara and Moscow reiterated their concerns over the developments in Idlib, with both parties expressing that the only way to reach peace in the region is to put an end to the violence.

"It is not acceptable for regime forces to target civilians," said Erdoğan, underlining that the threat posed by Bashar Assad's regime had reached a point that it targets Turkish soldiers in the region.

"We are concerned about the developments in Idlib. We think that the region should not be a host for terrorists. That is why we made some agreements on how to clear the area of terrorists. But respecting the territorial integrity of Syria is also quite crucial," President Putin said.

Erdoğan and Johnson discussed the developments especially in Idlib and Libya, as well as bilateral relations, the directorate said in a statement.

Satellite images show that residential places have been destroyed and evacuated in northwestern Syria, said the U.N. secretary-general's spokesperson Stephane Dujarric on Wednesday.

Speaking in the daily press briefing, Dujarric expressed the U.N.'s concerns over the intensified violence in the region.

Stating that the airstrikes in Idlib, western Haleppo and northern Hama continue, he added that hospitals, schools and civil infrastructure have been heavily damaged and humanitarian aid efforts have been blocked due to the ongoing attacks.

"Satellite images show that villages and towns have been destroyed and evacuated," he also said. According to numbers given by Dujarric, more than 550 civilians have lost their lives since April and more than 400,000 civilians have been displaced. He also added that many displaced people now live in open spaces outside the camps or under olive trees.

Underlining that the humanitarian crisis in the region has been getting worse, he reiterated that all parties must work to protect civilians and respect international law.

Meanwhile, Germany, Belgium and Kuwait presented a resolution on Syria to the U.N. Security Council, calling on all parties to respect international humanitarian law yesterday.

Belgium's permanent representative to the U.N. Marc Pecsteen said yesterday that the tension in Idlib threatens the lives of 3 million civilians and that's why they presented this resolution to the council. According to Pecsteen, the resolution also demands humanitarian access to the region.

Speaking to DHA, Eray Güçlüer, a security expert, said Turkey has become a playmaker in the region and that's why the U.S. cannot turn its back on the country. He added that whatever happens in Idlib cannot harm the enhanced relations between Turkey and Russia. Commenting on the situation in Idlib, he said despite the conflicting interests of two countries in Idlib, he does not think that relations between Turkey and Russia will get worse.

"Time will show the role of Russia in the regime attacks.

There are some elements in Syria that Russia cannot control," he added.