Fired victims of Istanbul municipality protesting, demand to be heard 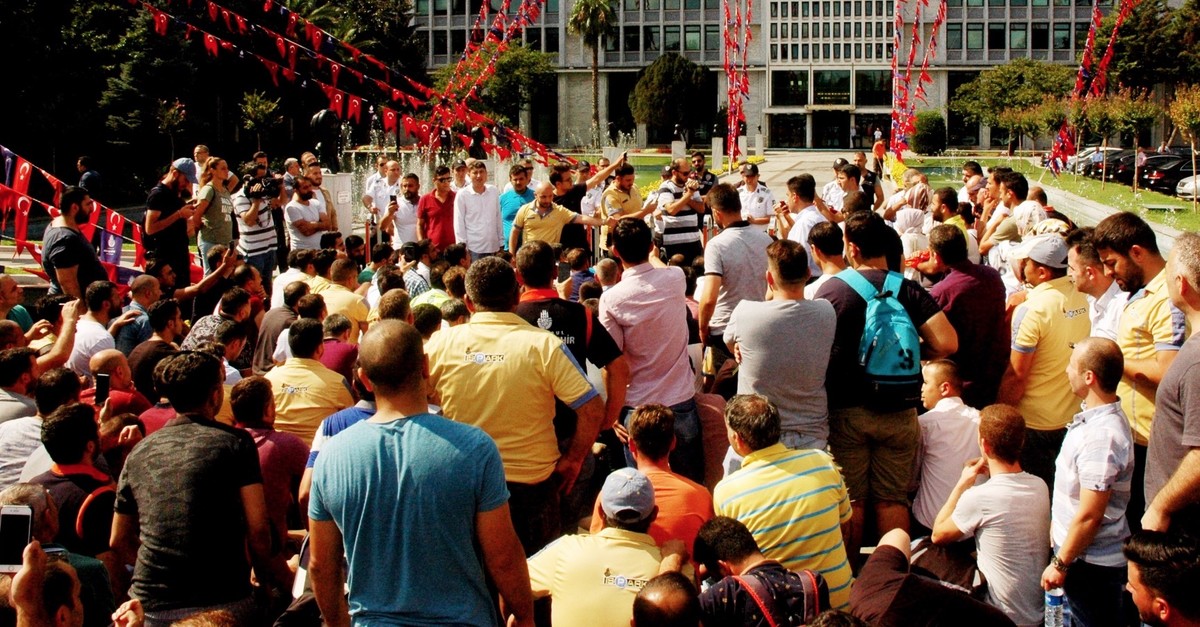 Victims who were fired by the Istanbul Metropolitan Municipality protest in front of the municipality building, Aug. 29, 2019.
by Şeyma Nazlı Gürbüz Sep 02, 2019 12:08 am

Nearly 1,400 people who have been fired from their jobs at the Istanbul Metropolitan Municipality without cause are demanding justice

It did not take very long for the Istanbul Metropolitan Municipality, which witnessed a gripping and intense local election process a few months ago, to be engaged in yet another surprising series of events. This time, the municipality made headlines by firing many of its workers through mere text messages, leaving thousands helpless and without jobs, looking for their voices to be heard through protests. "When I received the news that I got fired, I was still at work, doing my job. It was the very day that I returned to my job from my yearly vacation. First, the rumors reached us since the human resources department called some people to inform them on the issue. Yet, I never received a phone call," said Mihriban Cetinel, a private secretary at the general directorate of MEDYA AS.

Despite receiving the news, Mihriban completed her daily routine at her job. "Yet, it later turned out to my surprise that I was already fired a day before I received the news. This means that despite knowing that I've been fired, none of my managers or human resources people informed me on the issue and let me do my work for one more day. What kind of a lawless act is this?" she asked. The firings took place following the Qurban Bayram (Eid al-Adha) holiday, catching people off guard. The first department that had to face the bad news was MEDYA AŞ, which has lost 63 out of its 184 personnel.The Istanbul Electric Tram and Tunnel Company (İETT) followed, losing 850 of its drivers by the end of August.

BELTUR, on the other hand, has lost 175 of its workers so far. At ISPARK, another branch of the municipality which provides parking services throughout the city, 238 workers have been fired by the new administration. 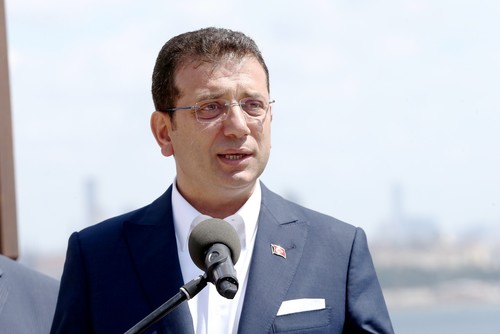 With the inclusion of all the other departments of the municipality, the total number of fired workers reached 1,400. Although the size of the numbers is surprising by itself, the really unexpected thing was the statements by the fired personnel, who expressed that they were fired without any justification.

"You've been fired, bye bye," were the words that Ahmet Haşim Zamur, another worker who is participating in a sit-in protest in front of the municipality's building, heard when he was fired without any confirmation.

"They neither got my signature nor my defense," he added.

"I received a message previously that said that the ones who do their work righteously will not be fired. What has happened since then? What has changed within a month? What have we done to end up fired? Why are so many of us victims?" asked Zamur.

He was not alone in his anguish, as almost all of the protesters were full of such questions and concerns.

Zamur is supposed to be getting married within a month, which makes the process that much more unbearable for him. This has resulted in a mental breakdown for Zamur, who says he is now using loads of anti-depressants to cope since he received the bad news.

According to the severance that the human resources made Mihriban and her friends sign later on, their labor contract was canceled ex-parte, by the employer. However, no solid reasons were given.

"Although we left our jobs on Aug. 21, we still have not received any compensation," Mihriban added.

THERE IS STILL NO PAYMENT

The severance reportedly expressed that the mandatory payments to fired workers was supposed to have taken place until Aug. 31. However, by the time this article was published, there were still no payments.

Despite the fact that there was no official reason offered, which is an unlawful act on part of the municipality since it goes against the workers' rights, Mihriban has her own suspicions on the issue, saying that the decision was mainly political.

"I believe that the fight between the leaders and political parties has reflected on innocent people," Mihriban said. "I am a supporter of the AK Party [the ruling Justice and Development Party]. I am very open about it. However, I was among the worker category of the personnel, meaning that I'm allowed to be a part of any political movement legally. It is nobody's business what am I doing in my spare time," she underlined, adding that there was nothing wrong with her work records.

Still, Mihriban said that she was expecting a change within her job, such being transferred to a different department since "everyone is allowed to work with a team that they desire and my managers also have the chance to form their own team."

Yet, being fired had never crossed her mind.

"My replacement was employed long before I was fired. However, I wasn't aware of this at that time. A girl started to work within the office a couple weeks ago, although she was not officially employed. However, the very next day after I was fired, she was immediately employed as a replacement for my position," she said.

Still, Mihriban also says that not everyone has shared a similar process with her. For instance, one of her colleagues Enes, who was working as an editor, has no idea why he was fired since he was an apolitical person who does not use social media.

"Everyone here are people who make an honest living and never leave their jobs under any condition. They have been miserable in these three days. Which law, what justice approves this?" said Sadettin Özgün, a former BELTUR worker, adding that he has never seen such a thing before.

He continued his speech by asking the mayor, Ekrem İmamoğlu, "Where is your [sense of] justice?"

A response from İmamoğlu came soon after, who decided to have a meeting with three spokespeople for the protesters on Friday.

"We have no personal problem with anyone who is or is not here," the newly elected mayor said, underlining that there is no political point in this situation.

"This is not a political move. There was a thing that we had a specific decision on during this process. We believe that justice, consciousness was not present during the employment activities in the election process. This is a decision that is taken for the law to be in the right place on this topic. It's nothing personal," İmamoğlu said, claiming that employing people within a month left to the elections was a wrong move for the former administration of the municipality.

Yet, a spokesperson interrupted the mayor, saying that she was employed five months before the elections and they, as the fired people, are not the supporters of any particular political party.

"We have been in a very difficult situation," she said, only to be answered by the mayor with the following words: "Everyone has their own difficulties in life."

SOME HIT HARDER BY PROCESS

Although, as the mayor expressed, everyone has their own difficulties in life, some seem to be hit harder by the process.

Rumeysa Pecinkaya, for instance, was an editor at MEDYA AS with two bachelor's degrees and a master's degree. Yet, she was fired alongside her fiance, two weeks before their wedding, which put the young couple in a quite challenging situation.

During his meeting with the spokespeople, the mayor also took a step further and stated that he "recommends" all the fired people to "take another chance in applying for a job at the municipality."

"We will employ people again when we need them. There have been 150,000 applications since I was elected," he said.

The mayor also expressed that they will re-evaluate the method of informing people through text messages regarding the whereabouts of their jobs.

Yet, Mihriban's story falsifies Imamoglu's words, as her journey in the municipality started four years ago and yet, still, she has been fired.

"I have done so much work, so many efforts. And still, they overlooked all this and fired me without even having a conversation with me. It hurts my honor," she expressed, adding that only two of the people who were fired from MEDYA AS were employed for less than six months. Since the firing of more than 50 people at once is regarded as a collective redundancy, Mihriban and her friends are planning to sue the municipality.

"We are planning to act collectively. Still, everyone will also sue the municipality individually in order to be able to return to work. Yet, for now, I can say for most MEDYA AS workers, we do not plan to work there even if we win the case and I can say that we have 95% chance of winning due to the unlawful firing process," she said.

According to the law, if a fired worker wins a case against his or her former employer, which happens in most cases where there is no reason given for the firing, the worker gets the chance to either work for four months there and receive an additional four months of salary or not going back to work but receive eight months of salary instead.

Mihriban and her friends are also planning to file a collective case for the emotional damage the process caused them since, especially on social media, they have been subjected to "unfair lynching," with many claims accusing them of deserving to be fired due to their "disreputable" activities.

With all these things combined, Mihriban says, the municipality will have to pay TL 2 billion if all the cases are won by the fired workers.

Regarding the duration of their protests, Mihriban said that they demand that the state authorities make a statement on the issue and to be heard by them.

"We will not stop protesting until the municipality gives an explanation on this issue to all of Istanbul," she added.