Turkey has no patience for delays on Syria safe zone, Erdoğan says 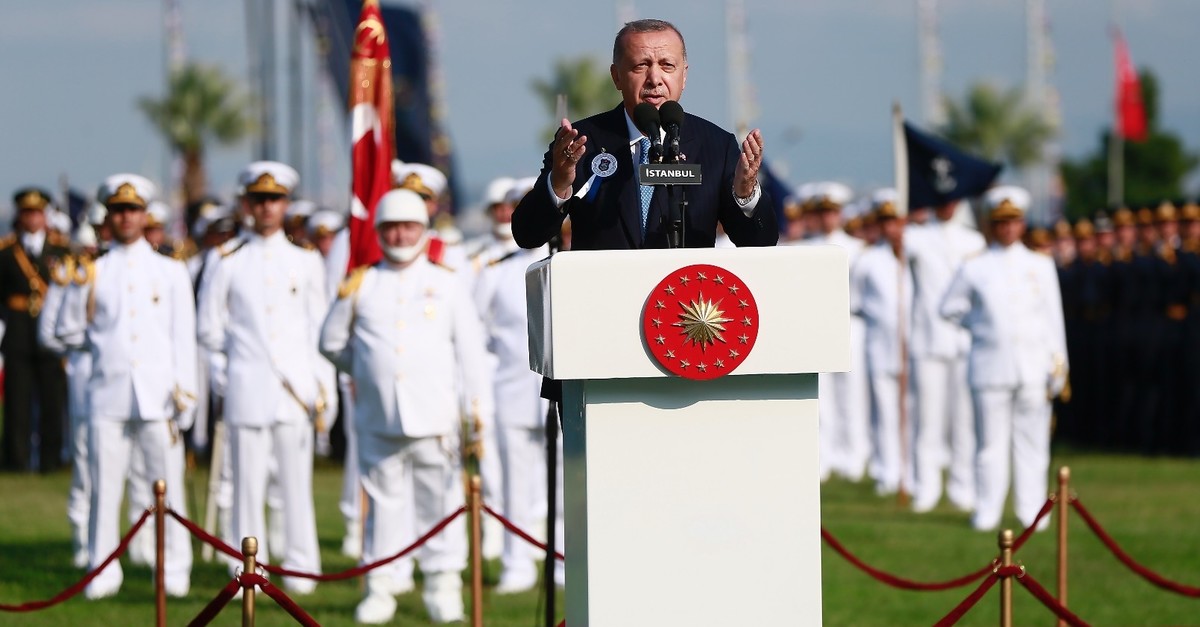 President Erdoğan reiterated that Turkey will have to implement its own operation plans in northern Syria if the U.S. does not take immediate action regarding the establishment of a safe zone

Turkey has no patience or time regarding the safe zone in northeastern Syria and will have no choice but to put its own plans into action if its soldiers do not take control of the area in a few weeks, President Recep Tayyip Erdoğan said on Saturday.

Speaking at the graduation ceremony at National Defense University in Istanbul, Erdoğan indicated his determination to carry out Turkey's plans to establish safety along its border.

"Turkey has no time and patience, and it wants the safe zone to be built along the eastern Euphrates line, along Syria, as soon as possible," Erdoğan said. "Three weeks later, there is the last chance when we hold meetings in the U.S. on the sidelines of the U.N. General Assembly session."

He also said that Turkey wants to actually create a safe zone with its own soldiers guarding it within three weeks in the eastern Euphrates according to conditions it has determined.

"Terrorist organizations oppression against the people in the region has become invisible in the eastern Euphrates area of Syria," Erdoğan added.

Erdoğan also said that Turkey has no intentions of giving up its NATO membership or its allies, even though it has been left alone amid some pressing problems.

The U.S., which has designated the PKK as a terrorist organization, still allies itself with the PKK offshoot, the People's Protection Units (YPG). By establishing a safe zone in northern Syria, Turkey hopes to resettle displaced Syrians currently living in the country and get rid of the PKK and its Syrian affiliate, the YPG, in the region.

The U.S. has primarily partnered with the YPG in northeastern Syria in the fight against Daesh. Turkey strongly opposes the YPG's presence in northern Syria, which has been a major sticking point in strained Turkey-U.S. relations due to the latter's support for the YPG under the pretext of fighting Daesh. The U.S. has provided military training and given truckloads of military support to the YPG, despite its NATO ally's security concerns.

To reduce tensions, Turkey and the U.S. agreed on a road map in June 2018, foreseeing the withdrawal of the YPG from Manbij and installing joint Turkish-American patrols, which began last November. However, the process has been sluggish as the terrorist group was still present in the city despite the three-month timetable set for implementing the deal.

Turkey expects the creation of a 32-kilometer safe zone in northern Syria, which must be cleared of YPG terrorists. Ankara has warned that if the establishment of such a zone is delayed, it will take cross-border military action to remove the terrorist threat on its southern border. Turkey previously conducted two offensives into Syria, against Daesh and the YPG, in 2016 and 2018. Operations Euphrates Shield and Olive Branch liberated the region from the YPG, PKK and Daesh terrorists, allowing hundreds of thousands of displaced civilians to return to their homes. The YPG is the Syrian offshoot of the PKK terror group, which has been responsible for the deaths of nearly 40,000 people in Turkey, including many children, women and infants, in more than 30 years.