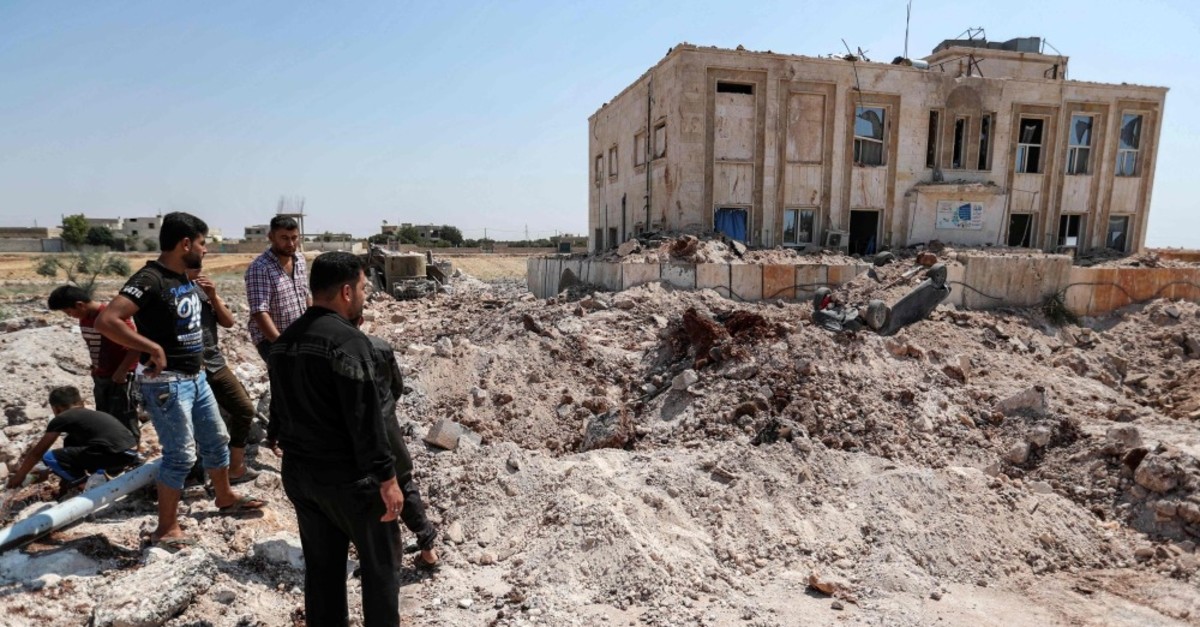 Residents inspect the rubble of damaged buildings, looking for victims, after a deadly regime airstrike in Idlib province, Aug. 28, 2019.
by Daily Sabah with Agencies Sep 05, 2019 12:19 am

In the face of a worsening humanitarian crisis that may trigger further migration waves, Ankara reiterated its call for international community to take action

Syria's northwestern province of Idlib faces gradual devastation, just like the war-torn country's Aleppo province, Turkey warned the international community as the violence causes further humanitarian crisis in the region. Speaking to reporters at a joint press conference with Czech Prime Minister Andrej Babis following a bilateral meeting at the Beştepe Presidential Complex in the capital Ankara, President Recep Tayyip Erdoğan said Turkey was taking all the necessary steps against any attacks or provocations in the region but warned that Idlib was slowly being destroyed.

Reminding the press that the U.S. started carrying out airstrikes on Idlib too, the president said, "Idlib is slowly disappearing. Idlib is being torn down into rubble just like Aleppo."

Erdoğan also said he would make all necessary contacts with parties in the region to find a solution to the situation in Idlib.

"We have an upcoming three-way meeting with Russia and Iran. We will discuss what can be done. We hope to take some of the steps before Geneva," Erdoğan said.

He also said Idlib would be the most important issue during his meeting with U.S. President Donald Trump as part of the United Nations General Assembly meetings later in September.

The escalating violence in Idlib has shattered a deal reached in September last year between Russia and Turkey to establish a buffer zone.

Hosting nearly 3.6 million refugees from Syria, Ankara often warns the international community and regional countries that a new offensive could trigger a fresh refugee wave toward the West.

"Turkey is not expelling and closing its doors to refugees, but we will be happy if we can help the establishment of a safe zone [in Syria]," Erdogan said.

Erdoğan said the safe zone, which he proposed to host Syrians fleeing the civil war, is now just a name and the de-escalation zone in the Idlib region is slowly disappearing because of military attacks by Assad regime forces.

"They say 'It's a very good project' but when it comes to take action, we unfortunately see no support. The safe zone is nothing more than a name right now," he said.

Last Saturday, the Turkish president said in Istanbul that Turkey will apply its own plan of action if Turkish soldiers are not allowed to control the safe zone in Syria.

In three weeks, on the sidelines of the U.N. General Assembly session, Turkey will use the last possibility to find a compromise with the U.S. on building a safe zone along the eastern line of the Euphrates River, he said.

Since 2016, Turkey has conducted two major military operations in northwestern Syria, Operations Euphrates Shield and Olive Branch, to purge the region of terrorist groups Daesh and the People's Protection Units (YPG), which is the Syrian branch of the terrorist organization PKK.

In its more than 30-year terror campaign against Turkey, the PKK, listed as a terrorist organization by Turkey, the U.S. and the EU, has been responsible for the deaths of some 40,000 people, including women, children, and infants.

As Ankara calls on the international community to take responsibility for the ongoing humanitarian catastrophe in northwestern Syria, Turkey continues to do its best in providing aid.

Reminding the media that many people have lost their lives and health facilities were destroyed due to the regime attacks targeting residential places in the region, Kınık said, "Almost 1 million people were mobilized. Half of them migrated to northern areas near Turkish border. There is still fear of death and massacre among people who stayed."

Underlining that there is a potentially huge migration wave that can head toward Europe crossing Turkish borders, Kınık said that Turkey has made its best efforts to access and provide aid including shelter, food, water, sanitation and health care services to people affected by this humanitarian crisis.

"Given the region is still an active engagement area, we bear a huge humanitarian responsibility because there is almost no international actor except Turkey in the field to provide humanitarian aid," he added.

Commenting on the cooperation protocol signed between the Turkish Red Crescent and Russian Red Cross on Tuesday, Kınık said the deal will provide a momentum to the Turkey-Russia rapprochement from a humanitarian perspective and give results in the field.

Thousands of children risk missing out on their education in northwestern Syria after a months-long regime assault on the opposition-run bastion that has closed dozens of schools, a charity said.

A fragile cease-fire has held in the Idlib region since Saturday, following four months of airstrikes that have killed hundreds of civilians and caused mass displacement.

"Thousands of children due to start the school year in northwest Syria may not have access to education" after the latest violence, Save the Children said.

Classes are set to start at the end of September, but just over half of the region's 1,193 schools can still operate, it said.

"As the new school year starts, the remaining functional schools can only accommodate up to 300,000 of the 650,000 school-age children," it said.

A further 200 schools are being used as shelters for those displaced by the fighting, it added.

The Idlib region is home to some three million people, almost half of whom have been displaced from other parts of Syria in the country's eight-year war.

Children make up half of the region's total population

The violence since late April has killed more than 960 civilians, according to the Syrian Observatory for Human Rights, and displaced more than 400,000 people, the U.N. says.

The U.N. High Commissioner for Human Rights, Michelle Bachelet, yesterday said that her office has tallied more than 1,000 civilian deaths in Syria over the last four months, the majority of them due to airstrikes and ground attacks by regime forces and their allies.

She said 1,089 civilians were killed in the war-battered country between April 29 and Aug. 29, including 304 children and added that nearly all – 1,031 – were reportedly attributable to regime forces and their allies in Idlib and Hama provinces. Another 58 were caused by "non-state actors."

After bombardment damaging schools or forcing them to close, many parents are scared to send their children to those still open, Save the Children said.

"Teachers are telling us that parents are pleading with them to shut schools for fear of them being attacked," the group's Syria Country Director Sonia Khush said.

"Many children are dealing with losing their homes, loss and grief. They should not have to fear losing their lives whilst they try to learn," she added.

Meanwhile, it was reported that the U.N. special envoy for Syria Geir Pedersen is expected to visit Turkey today. In talks in the capital Ankara, the latest situation in Syria, especially Idlib, is expected to be the main topic.