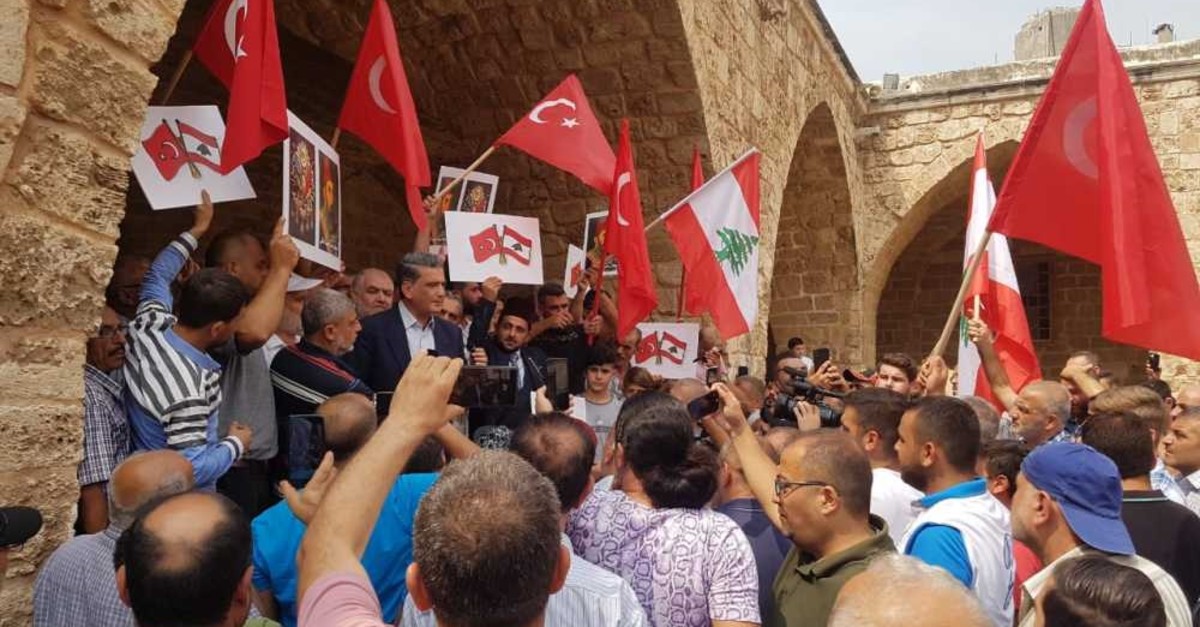 The Lebanese president's offensive remarks on the Ottoman era are a result of the country's anti-Turkey stance, which is fueled by regional political actors like Saudi Arabia, experts say

The waters between Turkey and Lebanon were muddied a few days ago with a single tweet posted by the Lebanese president regarding the Ottoman heritage in the country, referring to the era as a period of terror. Although the tweet itself certainly did not receive any welcome response from Turkey, the event's aftermath, which witnessed a protest in front of the country's embassy in Lebanon became the final straw, causing both countries to summon their respective envoys. Despite the fact that the tension intensified in an instant, according to experts, the incidents are actually the result of the strong, long-running influence of other regional actors with a heavy anti-Turkish stance.

Despite the fact that the tension intensified in an instant, according to experts, the incidents are actually the result of strong, long-running influence of other regional actors with a heavy anti-Turkish stance.

"As a matter of fact, the tweet that [Lebanese President Michel] Aoun posted concerning Ottoman heritage on the 100th anniversary of Lebanon's founding as a state has a quality that would be favored by any country (and political movement) that has an effect over Lebanon in one way or another," Fahri Danış, an academic and expert on Lebanon, said on the issue, underlining that the timing of the events is especially crucial since a similar incident took place last week in Saudi Arabia.

Marking the country's 100th anniversary, President Aoun recently blamed the Ottoman Empire for "state terror" before the founding of Lebanon. In the demonstration that took place in the following days, a group of protesters, reportedly members of Aoun's political movement unfurled a poster depicting a Turkish flag doctored to include a human skull. The incidents took place following Saudi Arabia's recent move to call the Ottoman Empire an "invasive and criminal state" in education books while referring to the era as the "Ottoman occupation."

"Of course, the dynamics in Saudi Arabia and the understanding of history is different from the factors in Lebanon. However, in both incidents, the real matter is that the recent foreign policy of Turkey that has been shaped by the Syrian civil war in the last 4-5 years has been causing a reaction from countries in the region, such as Saudi Arabia, Israel and Egypt," Danış said, explaining the impact of regional powers on the current approach of Lebanon to Turkey.

In Syria, Turkey has been supporting the moderate opposition and aims to provide peace, especially in northern Syria, by eliminating terrorist elements in the region to establish its own national security. Saudi Arabia, on the other hand, is backing fundamentalist terrorist groups in the region, while Iran has been supporting the Bashar Assad regime since the beginning of the war. All these different positions in the Syrian civil war create a conflict of interests between these regional actors.

However, in Danış's opinion, on this spectrum, Lebanon has a different position. "Before anything, the political system of Lebanon does not let a single person be the only major actor in the country," he said. Today's Lebanese administration consists of a loose coalition between Iran-backed Hezbollah and Saudi Arabia and Western-backed Prime Minister Saad Hariri's Future Movement. Aoun, on the other hand, despite being the candidate from Hezbollah, as Danış said, cannot be referred as someone who is fully on the same line with views that favor Iran but an important military figure in Lebanese nationalism.

According to Lebanese journalist Mahmoud Mroueh, although at first impression one may think President Aoun's announcement is related to the actual geopolitical configuration in the region and Beirut's alignment with Riyad, Abu Dhabi and Cairo, he does not want to assume a negative approach toward Ankara. "Even if Lebanon and Turkey are not real allies, many regional questions like Syria and the Eastern Mediterranean require them to cooperate. Foreign Minister Mevlüt Çavuşoğlu's Beirut visit, just a week before Aoun's speech, showed this dimension very well," Mroueh said.

Releasing an immediate statement on the issue after the protests, the Turkish Foreign Ministry strongly condemned and rejected his "baseless and biased" comments accusing the Ottoman Empire of practicing state terror in the region. The statement said that Aoun's comments had unfortunate and irresponsible characteristics that did not meet with the level of friendship between the two countries.

"In the history of the Ottoman Empire, there was no 'state terror.' In contrast to the allegations, there was long-lasting stability in the Middle East during the Ottoman era. This period was a time when people from different religions and languages lived together in peace and mutual tolerance," the statement added.

Meanwhile, Aoun's remarks continued to lead public protests on Friday as well, this time for the opposite reason as people gathered together following Friday prayers to support Ottoman heritage and Turkey.

Coming together in Tripoli, the crowd was carrying Turkish flags as well as pictures of Ottoman Sultan Abdulhamid the II and the Ottoman coat of arms. They also shouted slogans supporting Turkey and the Ottoman Empire. Political figures were also present in the protests, including former MP Misbah el-Ahdab and several members of Tripoli municipality's council.

According to Danış, the anti-Ottoman stance, as with almost every other country in Middle East, is an effective factor in Lebanon's politics. "As a matter of fact, Lebanon differentiates itself from the others because the identity perspective that lays behind its foundation is an exception that does not include being Arab and Muslim," said Danış, since Lebanon was founded under the French mandate. He said that as with every other nation state, Lebanon has also built its identity by determining a certain "other" to itself. "For Lebanese politics, this 'other' was clearly the Ottoman heritage," he said.

The Ottoman Empire did not have direct governance over Lebanon. Until the 19th century, the empire had a loose administration over the country through the Druze and Maronite families. However, in 1861, the lieutenant governor system in which the modern Lebanese state system has its roots was established. In this system, different sectarian groups in Lebanon administrated the country through the partnership. This system led the country to live in peace for a while, especially in the period between 1861-1923. Yet, it should be noted that there were conflicts in Lebanon before this system, especially between the Maronite and Druze groups, which lead to the first civil war in the country in 1860. However, since Ottoman rule was quite loose at that time, it wasn't strong enough to cause a conflict in the country for the most part, with the exception of the 1915 events, which had an important impact on Lebanon's Armenian society.

However, Danış also indicated that the identity-building process and the interference of other regional states are not the only reasons behind Aoun's sudden words on Ottoman heritage, as domestic politics and the president's personal interests were also at stake. "Aoun is a very important figure for the Christian community who is remembered for his heroic attitude during the civil war. His getting closer to Hezbollah since the latest presidential elections has created disappointment in his movement and for the other Christians in the country. Thus, the statement that Aoun made on the Ottoman past, which is one of the basic dynamics of Christian Lebanese nationalism, also aims to enhance the support he receives from his own base," Danış said.

"We have to understand that Aoun is trying, through his presidential mandate, to impose himself as one of the symbols of the Lebanese State and history. Thus Aoun in his speech tried to project his views on the historical events in Lebanon," said Mroueh on the issue.

"I don't know if Aoun is trying to launch a process of review, regarding the entire history of Lebanon. But unfortunately, I allow myself to say that his point of view is a little bit biased, especially when he did an implicit comparison between the impact of the French and the Ottoman presence," underlined Mroueh, adding that this point of view, although widespread in Lebanon, reduces the Ottoman presence down to its final years.

Mroueh pointed out, however, that he thinks this debate also shows "a kind of nostalgia" for the Ottoman Empire. "In the long run, Turkey-Lebanon ties are not based on strong foundations. Thus, except for trade issues and some deals, there is not much chance of a strategic partnership between the two countries," Danış said regarding the future of ties.

"As long as the current state of Lebanese politics based on the Iran-Saudi Arabia differentiation lasts, it is not possible for bilateral ties with Turkey to improve," he said.

Yet, it should also be noted that not all political actors in Lebanon have an anti-Turkey stance. Meeting recently with Turkey's envoy to Beirut Hakan Çakıl, former Prime Minister Fouad Siniora said that ties between the two countries should be strengthened regardless of the personal and historical matters, expressing hopeful views on the relationship.

Danış also indicated that it is hard to say that the anti-Turkish/Ottoman stance reflects in every part of society since society itself consists of many varieties of groups. Especially for Sunni Lebanese people, the Ottoman period is not remembered as a bad time, unlike the perspective of some other groups, especially Lebanese Christians who do not identify with the period.