President Erdoğan urges mayors to unite for interests of Turkey 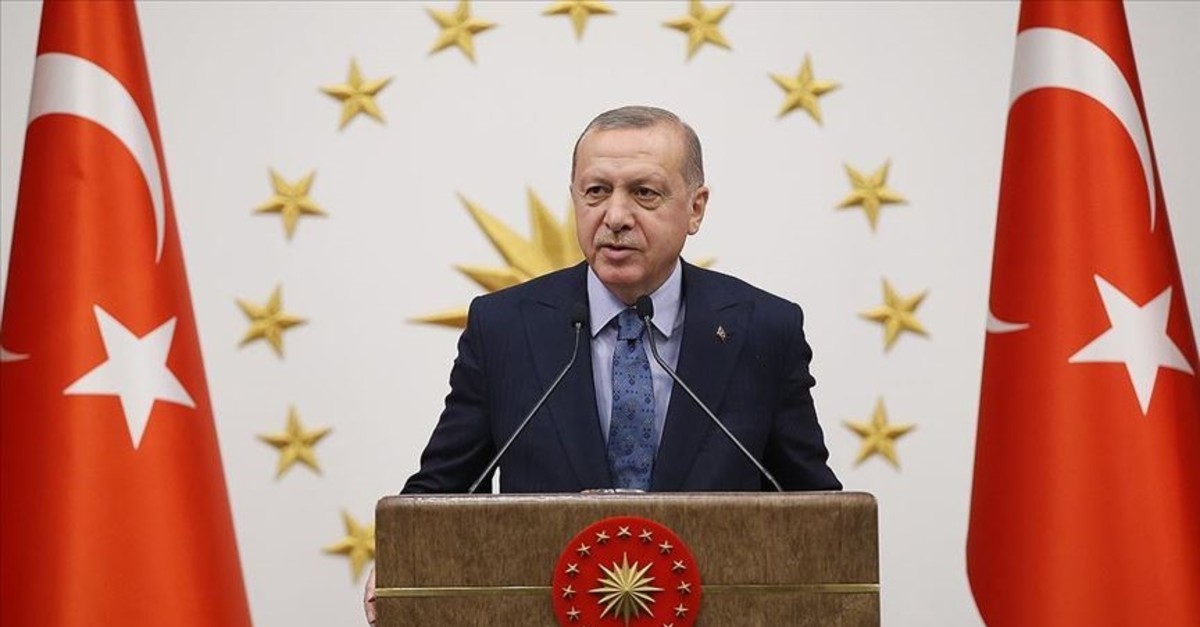 Politicians may have different views and stances but they need to be able to act in unison when the nation and country's interests are at stake, President Recep Tayyip Erdoğan said yesterday, calling mayors from throughout the country to unite for Turkey.

Addressing a meeting of 29 metropolitan mayors, Erdoğan said they can work together to resolve certain issues requiring legislative changes.

"Of course, we may have different political views and positions, but I believe that we can demonstrate the virtue of acting in solidarity when it comes to the national interests of our country and our nation," said Erdoğan adding that he is sure that this is the picture that "our people want us to look like."

"Our biggest response to the criticisms against Turkey is this picture of freedom. This beautiful scene where rivalries that were present during the election period have been abandoned and everyone recognizes the election results, is what I believe is the biggest insurance of our future [as a country]," the president said.

The meeting took place at the presidential complex in Ankara. Mayors from the ruling Justice and Development Party (AK Party), Nationalist Movement Party (MHP) and the main opposition Republican People's Party (CHP) attended the meeting, which marked the first time Erdoğan met all 29 mayors after the March 31 local elections. Among the mayors who attended the meeting, 10 of them from the main opposition CHP. Although the number invited was 30, the mayor of southeastern Hatay province could not attend the meeting since he was abroad.

Stating that three-fourths of Turkey's population has been living in metropolitan municipalities, Erdoğan said that as the mayors of these provinces, the participants have a great responsibility to fulfill.

During the meeting, the president expressed that he is pleased to welcome mayors who have distanced themselves from terrorist organizations and unlawfulness: "The picture we're displaying here is quite important for the country, at a time when we need unity, togetherness and fraternity the most," Erdoğan said.

Mayors who shun terrorist groups and breaking the law "are welcome" at the presidential complex, he further said.

The mayors of Diyarbakır, Van and Mardin metropolitan municipalities, who were all from the pro-PKK Peoples' Democratic Party (HDP), were dismissed last month by the Interior Ministry over terrorism charges. According to an official statement by the ministry, the mayors of Diyarbakır, Mardin and Van – Adnan Selçuk Mızraklı, Ahmet Türk and Bedia Özgökçe Ertan, respectively – were suspended for supporting terrorism. State-appointed governors for the provinces will temporarily replace suspended mayors as trustees.

The move was not the first as previously, back in 2016 many other HDP mayors also witnessed the same outcome as a result of their connection with the PKK terror group. Turkey removed the elected administrations of 94 municipalities in the region for their links to the PKK terrorist group and appointed trustees to these municipalities. According to the ministry's recent statement, 41 of the former mayors have been given a total of 237 years, 237 months and 171 days of imprisonment by a court on charges of terrorism and crimes related to terrorism. The pro-PKK HDP mayors, who were from the eastern and southeastern provinces and districts, were replaced by governors, deputy governors and district governors.

The newly appointed trustees of Mardin, Van and Diyarbakır represented the provinces in yesterday's meeting.

The president also pledged full support for all works that will be made to benefit the residents of the cities.

"I hope our meeting marks the first step for democratic conciliation that we have aimed for," he added.

Pointing to the fact that almost all municipalities have been suffering from financial problems, the president expressed that as a result of the determinations of the mayors, these problems can be eliminated.

"At the Parliament, we can handle the problems that necessitate a change in law while at the presidency; we can handle the issues that need an enactment. Other executive regulations can be handled at related institutions," he said, emphasizing that the only thing that matters is the "sincere support" of all the mayors and political parties in this process.

"Our joint efforts will give hope to our nation," the president underlined.

"When it comes to the services, we have never looked at which political parties the mayors are affiliated with. We have provided any investment that the province needs," the president said.

Erdoğan further underlined that all the ministers were also present at the meeting in order to make evaluations regarding the demands of the mayors.

Following Erdoğan's speech, a closed discussion session between the president and the mayors was held in order to improve the conditions of the provinces.

Touching upon the recent news that reported thousands of people being fired from various municipalities, Erdoğan said that neither the politics nor the services can be built on the people's sorrows.

"Every personnel number that comes in front of you on a paper as a total corresponds to a human being. It is inhumane and unjust to threaten hundreds of people's jobs by excusing wrongdoings of a few," he highlighted, adding that during his time as the mayor of Istanbul Metropolitan Municipality (İBB), he never fired anyone in an unfair fashion, regardless of their political affiliations.

"We expect from all of our mayors to act in a similar, sensitive fashion," the president added.

The new İBB administration under CHP's Mayor Ekrem İmamoğlu fired numerous workers from different organizations and agencies run by the municipality recently. The sackings were a clear violation of election promises made by İmamoğlu, who said that people's rights would be respected during his campaign. However, many workers reportedly lost their jobs because of their political views. The workers launched a protest in front of the municipality building after they were fired.