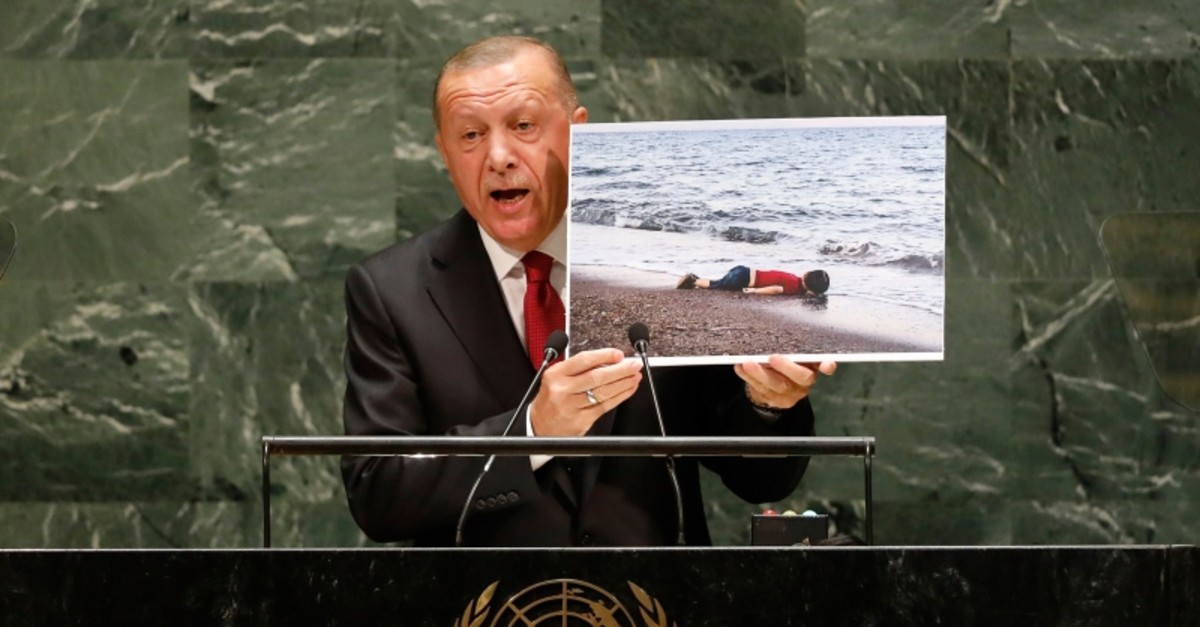 President Recep Tayyip Erdoğan drew attention to global injustice, as he highlighted a number of problems posing threat to global peace and security to people throughout different parts of the world in his address at the 74th session of the U.N. General Assembly on Tuesday.

"The international community is losing the ability to find lasting solutions to challenges such as terrorism, hunger, misery, climate change," Erdoğan said, as he criticized global powers for failing to take action to deal with crises.

"The world has forgotten about [Syrian refugee toddler] Aylan Kurdi too quickly," Erdoğan said, urging world leaders to support the proposed plan for a safe zone to be established in Syria as he showed a picture of the drowned toddler, which became one of the symbols of the tragedy facing Syrian refugees.

"We can ramp up the number of Syrians safely returning to their country to 3 million if the peace corridor is extended to Deir el-Zor-Raqqa line; I call on U.N. members to back Turkey's efforts to ensure security in Syria's Idlib," the president said.

Erdoğan also noted that efficient functioning of the Constitutional Committee is "critical for political and territorial unity of Syria."

Turkish and U.S. military officials agreed Aug. 7 to set up a safe zone in northern Syria and develop a peace corridor to facilitate the movement of displaced Syrians who want to return home.

The PKK's Syrian offshoot People's Protection Units (YPG) is operating under the disguise of Syrian Democratic Forces (SDF) in northern Syria and must be dealt with for safety and security of the region, said the president.

Hundreds of thousands of people have since been killed and more than 10 million others displaced, according to U.N. figures.

The PKK's Syrian branch YPG has managed to occupy one-third of Syria under the guise of fighting against Daesh with the support of the U.S.

Regarding the conflict in Kashmir, Erdogan criticized international community for failing to pay attention to the 72 year-old problem.

The president said the stability and prosperity of South Asia cannot be separated from the Kashmir issue.

"In order for the Kashmiri people to look at a safe future together with their Pakistani and Indian neighbors, it is imperative to solve the problem through dialogue and on the basis of justice and equity, but not through collision," said Erdogan.

The India-administered region has been facing a clampdown since Aug. 5, when the Indian government nixed Article 370 of the Indian constitution, which conferred a special status on it.

Interventions against Yemen, Qatar produced undesirable results, Erdoğan said, adding that Turkey also hopes to ensure security, stability in Libya through the establishment of democratic ideals based on free will.

The president harshly criticized the U.N. for failing to implement its own resolutions about Israel.

"Compared to the 1967 plan, Palestine nearly ceased to exist as Israel just can't get enough of occupation. What is the U.N. good for if its resolutions against one of its member states, Israel, mean nothing?"

The president suggested the immediate establishment of an independent Palestinian state on the basis of 1967 borders with East Jerusalem as its capital is solution.

He concluded his address with the message of 'freedom, peace, prosperity, justice, peaceful and safe future for all.