4-year Russian intervention in Syria results in thousands of deaths

More than 6,686 civilians died and millions were left homeless due to Russia's four-year-long intervention in Syria in support of the Bashar Assad regime.

The most significant turning point in the Syrian civil war, which has been going on since 2011, came when Russia's intervened for the Assad regime. 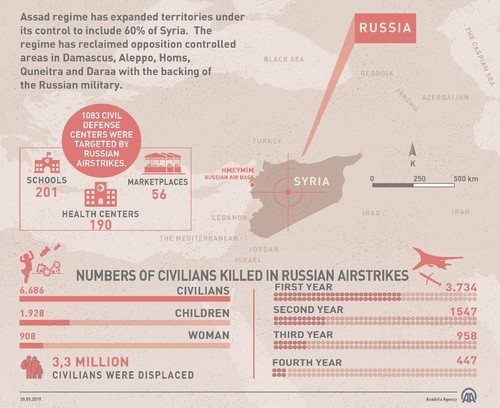 The country started airstrikes in Syria, under the pretext of fighting Daesh, on Sept. 30, 2015. Since its involvement and support for the regime has expanded with time. With the help of Russian Special Forces and mercenaries, the Assad regime was able to regain control of a huge part of the land it had previously lost to opposition forces.

The first time Russia's military influence in Syria was evident was in late 2016 when the regime regained control northern Syria's Aleppo. Eventually, the regime forces were also able to take control of the capital Damascus, Homs and other provinces in the south of the country with the support of Russia. Subsequently, the Assad regime controls nearly 60% of the country.

A Syrian Network for Human Rights (SNHR) report on Russian intervention in Syria says at least 6,686 civilians died, including 908 women and 928 children, in Russian attacks. Local sources, however, point to the fact that these numbers only belong to those whose identity could be determined and that the real number is higher. Some 3,734 of these deaths occurred in the first year of Russian intervention, 1,547 in the second, 958 in the third and 447 in the fourth year. Furthermore, Russian warplanes targeted 201 schools, 190 health centers, 56 marketplaces and settlements 1,083 times, displacing 3.3 million civilians. The report, which categorizes attacks where at least five people have lost their lives as "massacres," it was stated that Russia carried out 335 massacres in four years. Russia also conducted negotiations with the representatives of the opposition forces in the name of the regime and carried out ground operations, violating the Astana agreement. Thus, many settlements south of the Idlib de-escalation zone got under the control of the regime.

The Astana peace process, seeking to end the Syrian conflict once and for all, was launched in January 2017 upon the initiatives of Turkey, Russia, and Iran. The Sochi agreement, on the other side, was reached on Sept. 17 by President Recep Tayyip Erdoğan and his Russian counterpart Vladimir Putin.

According to the agreement the cease-fire in the Idlib region will be preserved, with the withdrawal of heavy arms and radicals from the region. Following eight months of calm provided by the Sochi deal, the regime has intensified its attacks since April 26 under the pretext of fighting Hayat Tahrir al-Sham (HTS) militants holed up in Idlib.