Trump's latest retweets: 'US aligned not with the Kurds, but with the PKK in Syria' 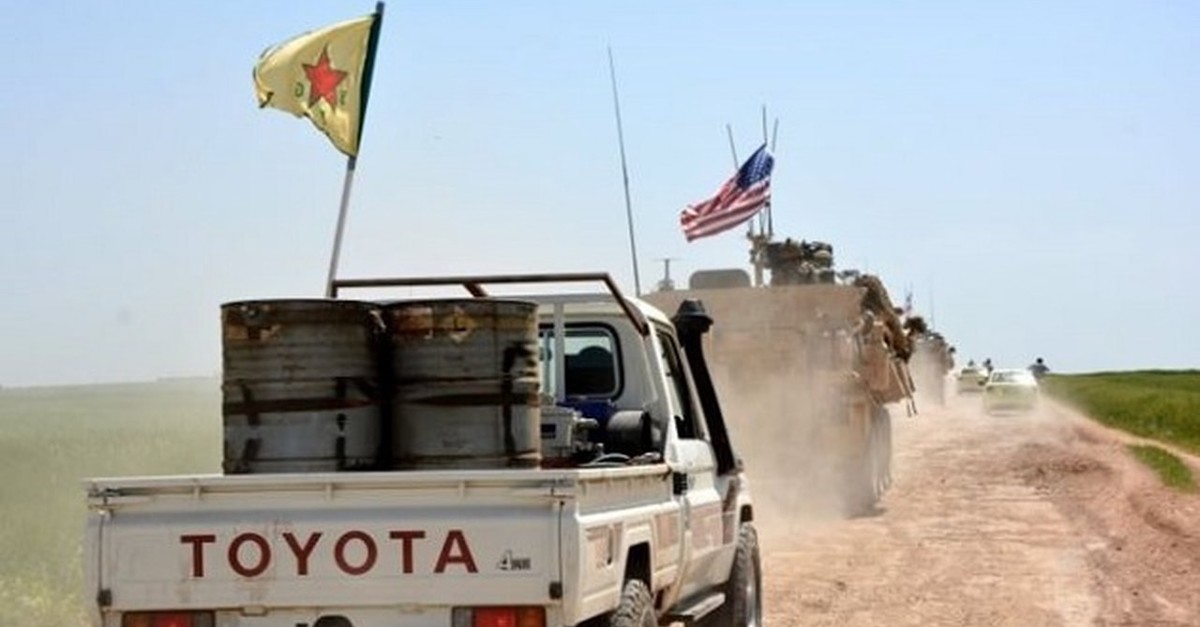 A convoy of U.S. army troops and YPG terrorists patrol close to the al-Ghanamya village, near the Syrian-Turkish border, Syria, April 29.
by Daily Sabah with AA
Oct 07, 2019 10:33 pm

Facing a staunch backlash in the U.S. Congress over his decision to pull back its forces from northeastern Syria, Trump went on the defensive Monday, retweeting half a dozen Twitter posts defending his announcement. One his retweets was of Michael Doran's, a senior fellow at Hudson Institute.

The tweet Trump retweeted accused the U.S. of having partnered with the terror group PKK and not the Kurds. It reflected what Turkey had been telling its NATO ally for many years, the fact that the U.S.' allies in Syria, namely the Syrian Democratic Forces (SDF) which is dominated the People's Protection Units (YPG), is an extension of the PKK, a terrorist organization that has waged a bloody war against Turkey for 35 years.

Tweeting hours after the White House declared late Sunday that American troops were withdrawing from Syria, Doran said the former administration of U.S. President Barack Obama had sown the seeds of a conflict between Turkey and the PKK in northern Syria.

"We aligned under Obama not with 'the Kurds,' but with the PKK, the sworn enemy of the Turkish Republic, our ally. We were sowing the seeds of a Turkish-PKK war with that policy. We were also driving Turkey toward Russia," Doran said on Twitter.

Trump reiterated his administration's commitment to withdraw troops from Syria on Monday, following a telephone conversation with his Turkish counterpart President Erdoğan a day earlier.

"The United States was supposed to be in Syria for 30 days, that was many years ago. We stayed and got deeper and deeper into battle with no aim in sight," Trump tweeted early in the morning.

The U.S. president then said the Kurds, referring to the YPG terror group in Syria, "were paid massive amounts of money and equipment to" fight with the U.S., in an apparent criticism of the policies of former U.S. administrations.

"They have been fighting Turkey for decades. I held off this fight for almost 3 years, but it is time for us to get out of these ridiculous Endless Wars, many of them tribal, and bring our soldiers home," Trump added.

Doran, who served in the administration of former U.S. President George W. Bush as a senior director in the National Security Council, also criticized Senator Lindsey Graham who has voiced concern for Trump's decision to pull troops out of Syria.

He said Graham needs Turkey and Saudi Arabia if he wants to contain the threat to the region emanating from Iran.

Another political analyst at the U.S.-based think tank Heritage Foundation, Luke Coffey, warned Americans of the YPG threat and said he is not "comfortable arming and training a Marxist group with links to terrorism."

"Regarding U.S. troops in Syria it is alarming how little debate there was in America about supporting the YPG. Call me old fashion, but I'm not comfortable arming and training a Marxist group with links to terrorism. I'm sure most Americans would feel same way too if they knew," Coffey tweeted Monday.

He added that the Americans should welcome Turkey's steps to eliminate legitimate security concerns along its long border with Syria.

"We should welcome Turkey taking steps to secure its border. The U.S. can't do it forever. They have legitimate security concerns," he said and informed Americans about the real nature of the YPG.

"Also, the YPG is a neo-Marxist group that serves as Syrian branch of the PKK (designated a terrorist group by the U.S. Gov't). So please spare me the tears," he said.

In the heat of Trump's withdrawal announcement during the day, U.K.-based political analyst Kyle Orton slammed Nikki Haley, former U.S. envoy to the UN, for siding with the terror group over a NATO ally.

"Nikki Haley might also explain at some point how she proposes to run an international order where terrorists the U.S. aligned with for contingent reasons become 'allies', and states that the U.S. is bound by treaty to defend with nuclear weaponry if necessary become 'not our friend,'" Orton said on Twitter.

He also retweeted a Turkish professor who said: "Referring to the SDF (PKK) as 'the Kurds' is like referring to ISIS as 'the Arabs' or Boko Haram as 'the Nigerians.'"

"#PKK/#SDF are narco-gangsters whose suicide bombers massacre people in football stadiums and who destroy all Kurds who oppose them," Orton said.