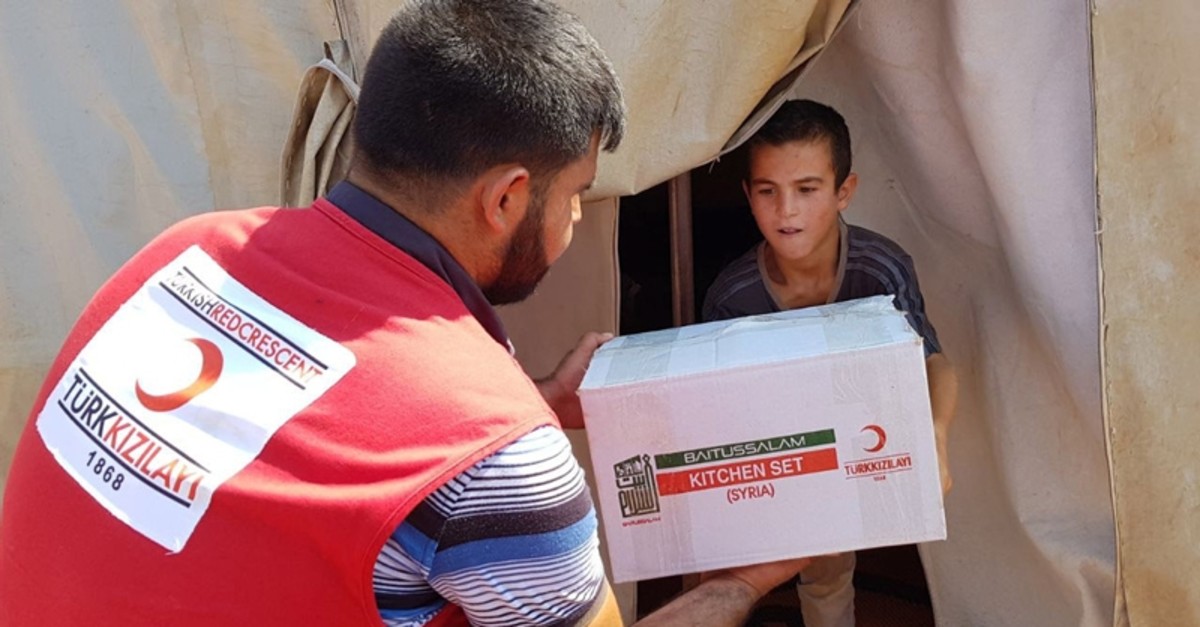 With the Turkish military steadily advancing in northeastern Syria every day, the Turkish Red Crescent has already rolled up its sleeves to provide vital assistance in the region

While Operation Peace Spring, aimed at freeing Turkey’s southern border from the threat of terrorism, continues in full swing, the Turkish Red Crescent, a leading humanitarian institution at the forefront of humanitarian relief work, is once again ready to take an active role in the region to meet the needs of civilians.
Speaking to Daily Sabah after the opening ceremony of the World Humanitarian Action Forum in Istanbul yesterday, the head of the Turkish Red Crescent, Kerem Kınık, stated that civilians are the main priority for the institution and that a convoy of two trucks has already reached Tal Abyad, a northern Syria province cleared from terrorist elements only two days ago. He added that they have been in contact with the United Nations, the Red Cross and international nongovernmental organizations during the Operation Peace Spring process to ensure the best possible coordination for the continuation of humanitarian aid in the region.
Operation Peace Spring, which started with President Recep Tayyip Erdoğan’s announcement on his Twitter account on Oct. 9, aims to ensure border security and reinstate the displaced Syrians in a safe zone in their own country. The most important objective of the operation, which has prioritized the safety of civilians since the first day, is to mop up terrorist organizations in the region and to leave the region to its real owners.
Kınık explained that they have been providing humanitarian relief to local people in the region as the operation successfully continues, and added: “Our humanitarian activities have begun as the regions have been liberated and freed from terrorism. Today, we entered Tal Abyad. We are providing urgent humanitarian aid to people in need in that area.”
He also outlined their plans for the post-operation process, stating that once the region is turned into a safe zone, they will open new border gates in Turkey, in Ceylanpınar and Akçatepe, southern towns in Turkey near the Syrian border, for international organizations to provide humanitarian aid to refugees and others living in refugee camps in the region.
Emphasizing that they have medium and long-term aid plans, Kınık said that emergency humanitarian aid will be delivered to the region at first, and long-term plans will be implemented for people to establish lives through humanitarian facilities to be established in the region after the area is completely cleared of terrorist organizations. Kınık highlighted that they will urgently carry out their activities in order to normalize life in the regions free of terrorist organizations through permanent and sustainable services and multidimensional aid such as health, education and protection, and to give the region back to its real owners.
Turkish Red Crescent proved itself during previous two operations
During the previous operations, Euphrates Shield and Olive Branch, the Turkish Red Crescent was also actively involved in the process from its beginning to end, providing humanitarian aid to the liberated provinces.
Kınık said that they would continue their humanitarian relief activities, which they carried out in the safe zone that was created after the Euphrates Shield and Olive Branch operations, in the area cleared of terrorist organizations through Operation Peace Spring. “We carried out successful relief activities in the regions where the Euphrates Shield and Olive Branch operations were conducted. In cooperation with the Ministry of Health, we operate six hospitals and 34 medical centers in the region, and we also have 2,300 Red Crescent health personnel,” Kınık added.
Kınık further stated that they provide services not only for health activities, but also for education, and explained that they support the refugee camps with a water distribution system. The Turkish Red Crescent head also stressed that all the activities carried out after Operation Euphrates Shield and Operation Olive Branch concerning multidimensional services, such as education, shelter, health services, food, hygiene, psychology support and social rehabilitation, would continue in the Operation Peace Spring area.
Syrian refugees provided with health care, education services
The Turkish Red Crescent also continues its relief activities for refugees living in Turkey and carries out works on several issues such as education and health care. According to Kınık, after meeting the basic needs of the incoming asylum seekers, they also provide health care and education to them. Furthermore, over 700,000 refugee children are attending school in the Turkish national education system to maintain their academics. The schooling of refugee children is also aimed at preventing their recruitment by terrorist organizations and to save the future of the country. “Along with UNICEF [the United Nations International Children's Emergency Fund], we provide education support to half a million children. We have opened community centers. We support them in learning the Turkish language, learning the rules of life in Turkey and learning professions in 16 community centers,” Kınık told.
Turkey has shouldered a major burden of humanitarian relief in the humanitarian crisis following the Syrian civil war that broke out in 2011. During the war, 5 million people were forced to leave their country, and Turkey welcomes 65% of these displaced refugees. Kınık said that both Turkish nationals living in the region and Syrian refugees were affected by attacks from northeastern Syria targeting civilian areas in Turkey as a result of the operation, adding that they have been helping those affected by the operation in cooperation with governorates and Turkey's Disaster and Emergency Management Authority (AFAD), and placing these people in container camps.
Kınık further emphasized that a flow of refugees to Turkey is not expected after the operation, saying that in fact people will be returning to their homes. He concluded by saying that they would do their best to normalize living conditions in the areas soon to be free of terrorism and to improve life in the region, stating that the Turkish Red Crescent is on the ground and ready to help.