Sorrow of losing children unites mothers from Srebrenica to Diyarbakır 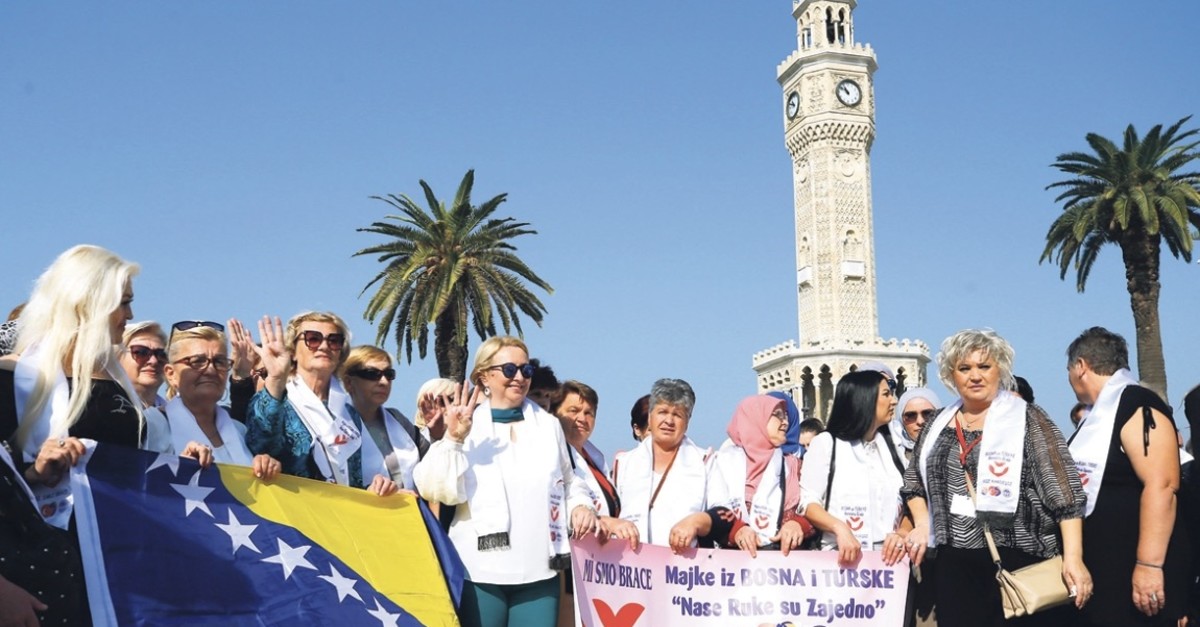 Mothers who lost their children in the Srebrenica massacres back in the Bosnian War came to Turkey Monday to show their support for Kurdish mothers protesting in Diyarbakır in hopes to get their children back from the PKK terrorist organization. Having a meeting in western İzmir province Monday, the Srebrenica mothers underlined that both groups suffer from the same pain of losing a child. "Yesterday, we were crying. Today, you are crying. You were alongside us back then. Now, we are alongside with you. We came here to help and support," said Mithedo Oruli, one of the Srebrenica mothers.

Planning to go to the southeastern province of Diyarbakır to "sit right beside the Kurdish mothers" in front of the pro-PKK Peoples' Democratic Party's (HDP) Diyarbakır headquarters where the protest continues, Srebrenica mothers expressed their fervor.

"We are very happy to go to Diyarbakır to visit the mothers. We want to say no to terrorism... We want to give a better future to our children," Oruli said, adding that they will always be there for the grief-stricken Kurdish mothers.

The sit-in has been ongoing since Sept. 3 with the number of families surpassing 50, including five Iranian families whose children were abducted by the PKK's Iranian wing, the Kurdish Free Life Party (PJAK).

Initially, the sit-in was inspired by a lone protest by mother Hacire Akar in front of the HDP provincial organization in Diyarbakır last month. Akar wanted to see the return of her 21-year-old son Mehmet Akar, who had been missing for three days after he was abducted by the PKK terrorist group. Following her sit-in, and with the help of security forces in Diyarbakır, Akar was finally reunited with her son.

The mothers are expected to release statements on their way to Diyarbakır at various stops to show their support.

Similar events have taken place previously and have continued since the PKK started its more than 30-year terror campaign against Turkey, which has led to the deaths of some 40,000 people, including women, children and infants.

It is not a coincidence that mothers from Srebrenica felt the need to show support to Kurdish mothers protesting the PKK as they can understand their grief.

More than 8,000 Bosnian Muslim men and boys were killed after Bosnian Serb forces attacked Srebrenica in July 1995, despite the presence of Dutch troops tasked with acting as international peacekeepers. Srebrenica was besieged by Serb forces trying to wrest the territory from Bosnian Muslims and Croats to form their own state.

The U.N. Security Council had declared Srebrenica a "safe area" in the spring of 1993; however, Serb troops led by Gen. Ratko Mladic, who were later found guilty of war crimes, crimes against humanity, and genocide, overran the U.N. zone.