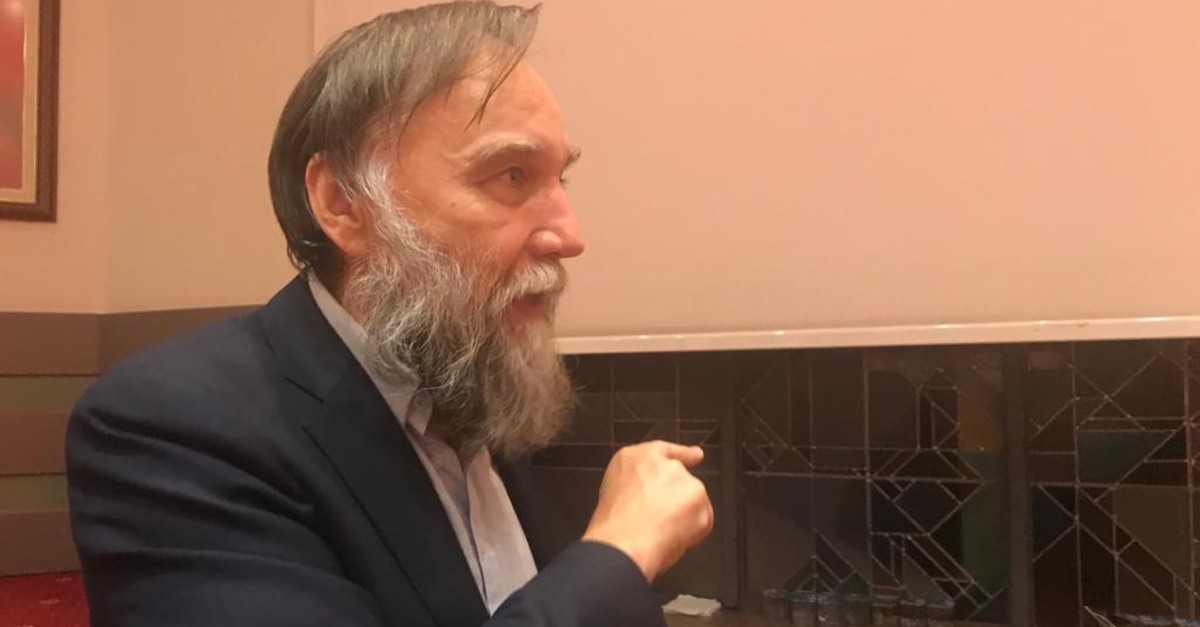 Russian political scientist Alexander Dugin, speaking to Daily Sabah
by Mustafa Kırıkçıoğlu Oct 25, 2019 8:51 pm
The interventionist and separatist policies of Western countries have no place in the Middle East or the Eastern Mediterranean anymore, Russian political scientist Alexander Dugin said, adding this will allow for the strengthening of bonds between regional countries.
The colonial attitude has sought to make people struggle with each other and fight for resources. In order to solve this problem, we need to take the West out of the Middle East, the process is already ongoing, as we witnessed in the Sochi deal, Dugin told Daily Sabah in an exclusive interview.
“With achieving the end of decolonization, we have new roles for regional countries. We need to achieve the decolonization of minds, not just political decolonization, he added.
After the U.S. decision to pull troops out of northern Syria with the deal Ankara and Washington struck on Oct. 17, Turkey and Russia reached another memorandum of understanding in Sochi on Oct. 22, 2019. The 10-article deal envisaged the Russian military police and Syrian border guards on the Syrian side of the Turkish-Syrian border, outside the area of Operation Peace Spring, to facilitate the removal of the PKK-affiliated People's Protection Units (YPG) and their weapons 30 kilometers from the Turkish-Syrian border.
Dugin emphasized that nobody can accept unilateral U.S. hegemony anymore and the presence of President Donald Trump in the White House is a significant opportunity for ending this U.S. interventionism “as the president is against such policy.”
Speaking on the recent situation in the Eastern Mediterranean, Dugin stressed that Russia doesn’t have a “great deal of interest” in the region, adding that the Greek Cypriot Administration had the chance to establish closer relations with Russia but had “already has missed it.”
“It preferred to follow EU bureaucracy,” the Russian analyst said, also recalling the Greek Church’s decision to recognize the autocephaly of the Orthodox Church of Ukraine.
The Greek Cyprus administration unilaterally declared a total of 13 so-called parcels in the Eastern Mediterranean as its Exclusive Economic Zone (EEZ) and allowed international oil and drilling companies to operate in these areas, which are anticipated to hold rich hydrocarbon reserves. Turkey has consistently contested the Greek Cypriot administration's unilateral drilling in the Eastern Mediterranean, asserting that the Turkish Republic of Northern Cyprus (TRNC) also has rights to the resources in the area.
When asked about his critical views of Turkey in the past, Dugin said that his ideas and Ankara’s geopolitical stance have evolved over time, which made him understand Turkey’s position better.
“I understood that it was a pragmatic and realist attitude by Ankara to use a Western alliance against a possible Soviet threat; and I think at the same time Turkey understood during the U.S.’ invasion of Iraq that NATO did not fulfill this function anymore. As a country that has neither a completely Eastern nor Western identity, like Russia, Turkey has become a Eurasianist sovereign power in multi-polarism,” he stated
Last Update: Dec 20, 2019 1:14 am
RELATED TOPICS