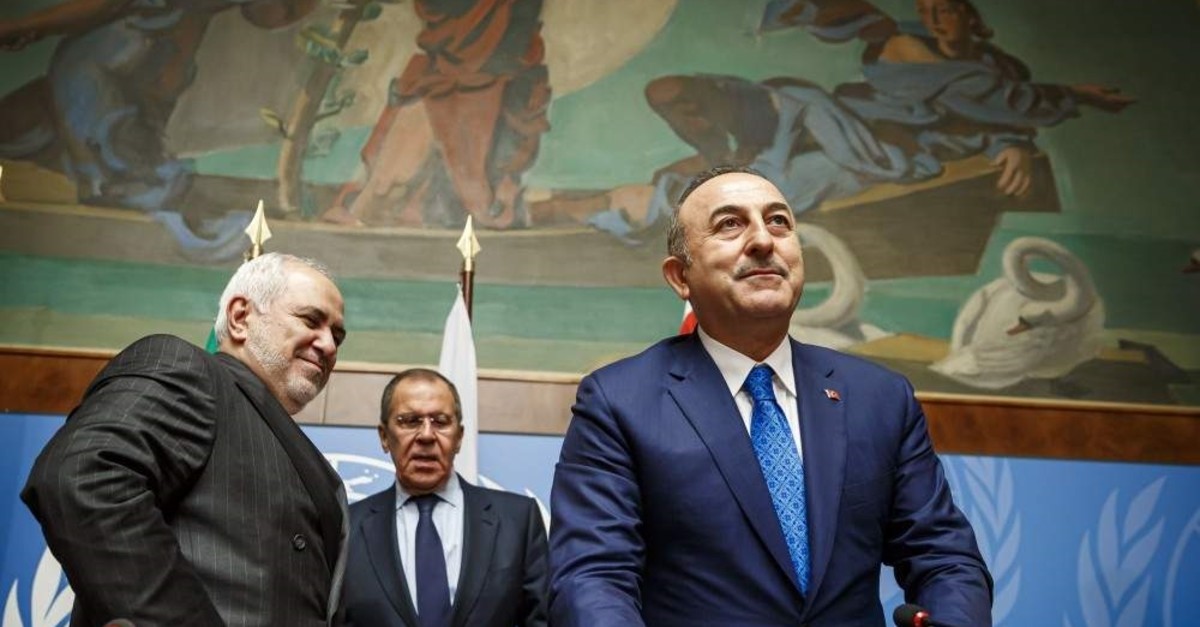 From left to right, Iranian Foreign Minister Mohammad Javad Zarif, Russian Foreign Minister Sergei Lavrov and Turkish Foreign Minister Mevlut Cavusoglu leave after a press conference on their Astana Guarantors' Meeting. (EPA Photo)
by Oct 30, 2019 12:30 am
Foreign Minister Mevlüt Çavuşoğlu said Tuesday that the country believes Russian authorities who have ensured them that the PKK terrorist group’s Syrian affiliate the People’s Protection Units (YPG) have left the region. At the same time, however, he added that they do not trust terrorists.
Speaking at a joint news conference with his Iranian and Russian counterparts in Geneva, Çavuşoğlu said, "Russia informed us that PKK/YPG elements left. We have to believe our Russian partners but we cannot trust terrorists.
”The minister also vowed that Turkey will eliminate any YPG terrorists that remain in the planned "safe zone" in northeastern Syria after the expiration of a 150-hour deadline agreed upon by Ankara and Moscow. Touching on the Syria Constitutional Committee meetings that will start tomorrow, he said that the launch of talks for a new Syrian constitution is a huge step forward.
On Oct. 9, Turkey launched Operation Peace Spring to eliminate terrorists from northern Syria east of the Euphrates River in order to secure Turkey's borders, aid in the safe return of Syrian refugees, and ensure Syria's territorial integrity.Last week, President Recep Tayyip Erdoğan and his Russian counterpart Vladimir Putin held a meeting in Russia's Black Sea resort town of Sochi.
Ankara and Moscow reached a deal under which YPG terrorists will pull back 30 kilometers (18.6 miles) south of Turkey's border with northern Syria within 150 hours, and security forces from Turkey and Russia will conduct joint patrols there.
In its more than 30-year terror campaign against Turkey, the PKK -- listed as a terrorist organization by Turkey, the U.S. and the European Union -- has been responsible for the deaths of 40,000 people, including women, children and infants.
Last Update: Dec 20, 2019 1:19 am
RELATED TOPICS