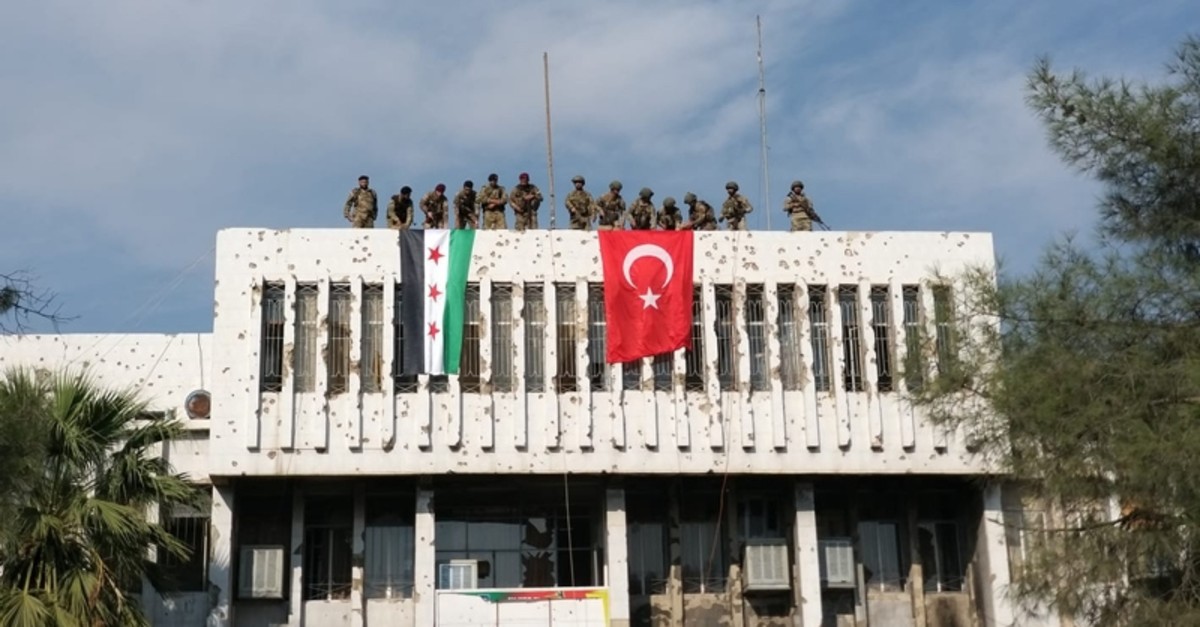 |Sabah
by Yasemin Nicola Sakay Nov 10, 2019 5:59 pm
Lütfü Savaş, the mayor of Hatay in Turkey's south, has called recent efforts to establish a safe zone in Syria a move that was long overdue, slamming international actors for not taking timely action as the border province tries to deal with overstretched resources to accommodate the needs of its growing population.

The province has for many years been grappling with the social and economic problems stemming from the sudden increase in population. There are currently 440, 920 Syrians living in Hatay, which account for 27% of the total population.

Speaking to reporters in an interview on Thursday, Savaş reproached that a "safe zone" along the border still hasn't been built.

"I have been calling for a safe zone for years. It's a late move. It would have been much more effective had it been established years ago," he said, adding, "If discourse goes parallel with action the plan will succeed."

He said such a zone by the border should have been established right from the start.

"Call them tent cities, prefabricated homes or permanent residential areas... That would have been much more economical than (Syrians) settling here, and it would have been the right thing to do."

According to Turkey's safe zone plan, 140 villages and 10 district centers will be established within the 30-40 kilometer deep safe zone in northern Syria, housing 5,000 and 30,000 inhabitants each, respectively. The settlements will be provided with various facilities so that the people living there will be able to have a normal life with every necessity met. Each village within teh area will have 1,000 houses, and each district will have 6,000 new homes built, making 200,000 new residences in total. The construction is expected to cost about $26.6 billion.

Savaş also proposed that Turkey and Syria should start diplomatic talks to put an end to the war and establish peace once and for all.

"Turkey and Syria must adopt a joint course of action and sit together at one table to solve this problem," he said, adding: "We are currently in no position to be feuding with Syria. Reason and logic say so."

Saying it was difficult both for Syrians and the local host community, Savaş said they wanted peace for the sake of their guests' safety and future. He said this could be made possible only if international actors work closely to solve it.

"This is not a problem that can be solved by locals only," he asserted.

Ankara has many times criticized the international community for not funneling sufficient humanitarian aid for refugees in Turkey and not taking in more refugees.

Also touching on Syrians' returns, the mayor said that those who have managed to integrate into Turkish society, of course, don't want to go back but those who have suffered understandably do.

"They want to go back to their homes, to the lands they know where people speak their language."

Savaş said this differed from person to person and region to region, but in the end it was also a matter of opportunity and means.

"Those that are better off want to go the U.S. or Canada, while those with lesser means strive for Europe or Turkey."

He reiterated that the real victims were the Syrians who had to flee their country and not those fighting.

Pointing out that in the eight years Syrian refugees have been in Turkey several brawls have broken out between the local Turkish communities and Syrians in different provinces across the country, the mayor said this wasn't the case for Hatay and only a handful of spats between individuals were recorded.

Savaş attributed this to the deeply-rooted culture of empathy and tolerance in the region, where people from different civilizations, religions, sects and ethnical cultures have lived in peace, brotherhood and harmony since 9,000 B.C. He said Hatay has always been "a center of tolerance" where Sunni Muslims and Alevis, various Christian sects, as well as Jews have lived together "without any religious or ethnic discrimination."

"Our people never leered at Syrians, they always sympathized with them. However, it's a fact that what we all want is for there to be peace in Syria as soon as possible, and for our brothers living away from their homelands to return safely."

Savaş said when the number of guests surpasses a certain number, that's when things start to get complicated. He said almost 500,000 Syrians were living in Hatay, constituting about a third of the population.

"First of all, our living standards and ways of living are not equal. Socioculturally speaking, we are very different. Our customs and traditions are different," he said, underlining that all were factors which led to social incoherence in the community.

He also drew attention the economic hardships of trying to accommodate such a significant number of guests. The per capita income has fallen to below $6,000 from the pre-Syrian war level of $8,000, he said.

"When numbers are that high, economic concerns start to emerge and housing problems stand out. (When you think about it,) you are trying to look after 2.1 million people with the money of 1.6 million. You suddenly have to pay for four people, not three. If it was for two or five weeks we'd be okay but eight years wears you down."

"You see, we have been dealing with this for eight years, and just because our people are tolerating this doesn't mean that we accept it. This isn't right," he said, expressing hope that peace will soon prevail in the war-torn country and other countries will actively start contributing toward achieving this goal.

He also expressed fear for the future of the locals of Hatay. He pointed out that many Syrian children can't go to school because they either have to work to get by with their families or there aren't enough institutions or teachers to give them the education they need.

He warned that illiteracy will create the perfect breeding ground for radicalization and manipulation, which could eventually turn the area into a hotbed of terrorism. He called on the international community to do its part regarding the situation.

The conflict in Syria has killed hundreds of thousands of people and forced more than 5 million people to flee, while more than 7 million are internally displaced.

Since 2011 – the year the war broke out – Turkey has received a constant flow of displaced Syrians fleeing the conflict, with the numbers of refugees expanding from mere thousands to millions. As of October 31, there are 3,680,603 Syrians in Turkey, the biggest share of refugees among host countries. Refugees from Syria now account for about 4.29 percent of the total population. Women and children make up the majority of the refugees.

In Hatay, the district of Reyhanlı has been carrying most of the refugee burden on its shoulders. The district hosts about 65,000 Syrians while its own population is only about 89,000 people. Though Reyhanlı widely embraced the displaced, it was also directly affected by the conflict in Syria. 53 people were killed when two bombs exploded in the town in 2013 in two bombings blamed on a faction of militants linked to the Assad regime.

According to Turkey's Public Auditing Agency (KDK), a total of 276,158 Syrians were born to refugee families in Turkey between 2011, when the civil war broke out, and 2017. So far, Turkey has spent more than $30.2 billion on their well-being.

The KDK report said the population of Syrians living in Turkey may increase to 5 million in 10 years, drawing attention to the fact that even though the war may end in Syria, many Syrians in Turkey could decide not to return home.
Last Update: Nov 10, 2019 7:08 pm
RELATED TOPICS