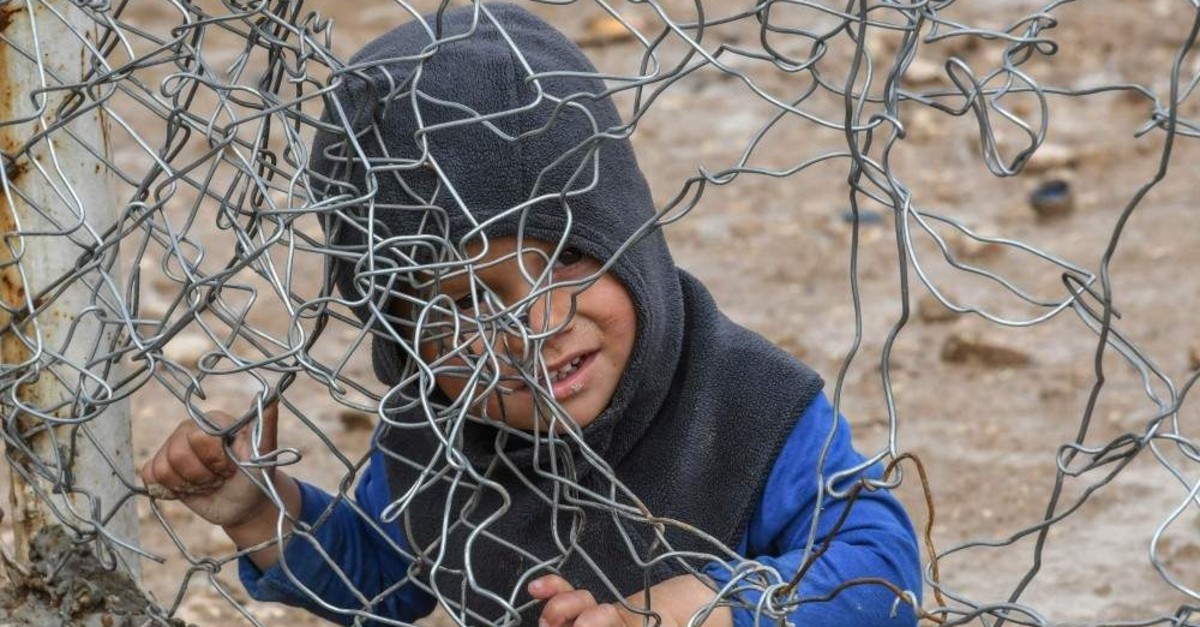 The lack of a sustainable solution and coherent policy on Europeans who joined Daesh and other terrorist groups constitutes a major challenge for the continent. The advantages and disadvantages of taking back the former terrorists, as well as leaving them out must be weighed in with caution.

Europeans that once left their country to join Daesh in Syria and Iraq, are now left with nowhere to go after the terrorist group lost the last stretches of its land. Most of them are stuck either in crowded camps or prisons in Syria or Iraq, subject to the possible risk of unfair trials.
The 23-year-old Belgian, Bilal al-Marchohi is one of those waiting for his death sentence in Iraq, even though European courts are regarded to be much more capable of holding credible trials. Earlier this June, 11 French citizens were sentenced to death.

Turkey has voiced for a long time that returning foreign fighters to their respective countries could be the best possible solution amid other unfavorable options. With their return to the EU, the citizens would be taken under control and prosecuted thus prevented from being further radicalized in camps with poor conditions.

"Some countries have started panicking after we began the repatriation process of foreign Daesh terrorists. Turkey has worried about this issue for years, let others worry now," President Recep Tayyip Erdoğan told a news conference ahead of his official visit to the U.S.
Turkey will continue to deport foreign Daesh terrorists to their countries of origin whether the countries accept the terrorists or not, the president added.

Erdoğan said Friday that there are 1,201 Daesh terrorists in Turkish prisons. It has also captured 287 fighters in Syria.

Some countries, however, are less reluctant to take back their citizens. Kosovo took 110 of its citizens back in April. Bosnia-Herzegovina announced Monday it would take back its 260 citizens in Syria, 100 of them being former Daesh members. Many Central Asian countries, like Uzbekistan and Kazakhstan, also allowed back large numbers of their citizens.

“There are tens of thousands of people in the camps, yet only about 10,000 are former Daesh members, the rest are their families. This could create the conditions for radicalization and the re-emergence of Daesh,” Göktuğ Sönmez, director of Security Studies at the Middle East Strategic Research Center (ORSAM) told Daily Sabah.
He added that people lose their identities in such conditions, a prerequisite for radicalization when people want to feel to belong to a place or group, making them an easy target for terrorists.

Large and overcrowded refugee camps exist in the Syrian towns of al-Hol, Ayn Issa and al-Roj. The U.N. has long warned of the adverse situation refugees face in these camps where the registered number was updated lastly by the U.N. on Nov. 5 to be 276,251 people living under conditions of lack of food, hygiene, medication, water and other basic needs.

Then again, some EU countries have revoked the citizenship of these foreign fighters, instead of taking the problem head-on. Britain has so far revoked the citizenship of several individuals.
In April, Germany approved a law allowing dual nationals to lose their citizenship if they fight for a foreign terrorist group, yet the law will not be applied retroactively.
Denmark has announced the approval of a similar law on Oct.14, allowing to revoke their citizenship while they are abroad, without a court ruling, which was previously a requirement. "These people have turned their backs on Denmark and used violence to combat our democracy and freedom. They are not wanted in Denmark," Prime Minister Mette Frederiksen stated after the announcement.

Speaking to Daily Sabah, Muhterem Dilbirliği of the Security Studies Institute at the Police Academy said: “Revoking the citizenship of individuals creates legal inconveniences. There is no basis for this in international law, therefore the countries target those with dual citizenship.”

The issue of repatriating the citizens triggered an intense debate in many countries and has several difficulties ranging from the complications of trying these individuals and the threat they might still pose after their return.

“A new individual can form a new cell or increase the activities of an existing cell. A returnee has the knowledge of the field, he knows how to conduct technical preparations for an attack, has connections or knows how to use weapons,” Sönmez continued saying that therefore these people have to be separated from other criminals in order to hinder being radicalized in prisons, which can be an incubator of radicalization.
The financing and organizing an area big enough for the huge number of former terrorist fighters is another challenge that has to be dealt with, "a separate cell for each one or cells with maximum three criminals would be ideal,” Sönmez said.

Prosecuting former Daesh terrorists, experts think, poses a huge challenge since many get away with relatively short prison sentences generally ranging between 2-5 years and rarely being more than that. The reason for this is the lack of evidence, it is hard to determine which kind of activities were conducted by them in Syria and Iraq and therefore the trials are mostly based on confessions. While most confess having participated in the terrorist group, the concrete details are generally left out.
One of the most recent examples of these types of short sentences was 29-year-old Aidan James from the U.K. Even though video footage showed him learning to fire an AK-47 at a camp run by the PKK's Syrian offshoot the People's Protection Units (YPG) at Mahkmour in Iraq, he was only jailed for one year Thursday.
This leads to the risk of former terrorist fighters to enter society again without the necessary punishment and without having been changed. Public opinion points against repatriating these individuals, which is one of the reasons behind the EU’s hesitation, fearing public backlash.

Some foreign fighters came back disillusioned or traumatized by their war experiences, but others may have returned with malicious intentions. Generally speaking, each government would prefer that foreign fighters do not come back, while not formally preventing them from doing so, according to the Egmont Institute. The terrorist attack of Paris in 2015 and Brussels in 2016, conducted by returnees, is one of the main reasons Europeans fear taking their foreign fighters back.

Referring to the proposed solution of establishing an international court for the prosecution of foreign fighters, Sönmez said “The establishment, as well as the prosecution processes, would take years. Furthermore, forming such a court in the YPG area would mean to give the terrorist organization legitimacy.”

Meanwhile, even though the EU has turned its back on its citizens, Turkey has started to deport the foreign terrorist fighters to their nations to contribute to the solution. A U.S. national was deported Monday following the completion of legal proceedings, Interior Ministry Spokesperson İsmail Çataklı said.
The American terrorist was not admitted by Greece, leaving him stranded in the no man's land between the two countries. A Danish citizen was also sent back who was arrested by the police on arrival. Seven terrorists of German-origin are scheduled to be repatriated Thursday while Turkey is also preparing to deport 11 French citizens captured in Syria.

However, French Defense Minister Florence Parly said yesterday she did not know any specific repatriation at this point, referring to the 11 French citizens.

Pointing out that there are double standards, Dilbirliği emphasized that the EU is only focused on Daesh members whereas there are also who fought alongside the YPG and PKK. “The EU has to concentrate on those that fought alongside the YPG. They are avoiding this part of individuals because otherwise, they have to face the situation as a whole. YPG fighters are branded as "freedom fighters," by trying to give them a legitimate basis under the pretext of fighting Daesh,” he said.

On the issue of Turkey returning foreign fighters to the EU, the EU's high representative of the Union for Foreign Affairs and Security Policy Federica Mogherini said Monday, “Each Member State has a different framework for dealing with that – in legal terms, but also in terms of competence.”