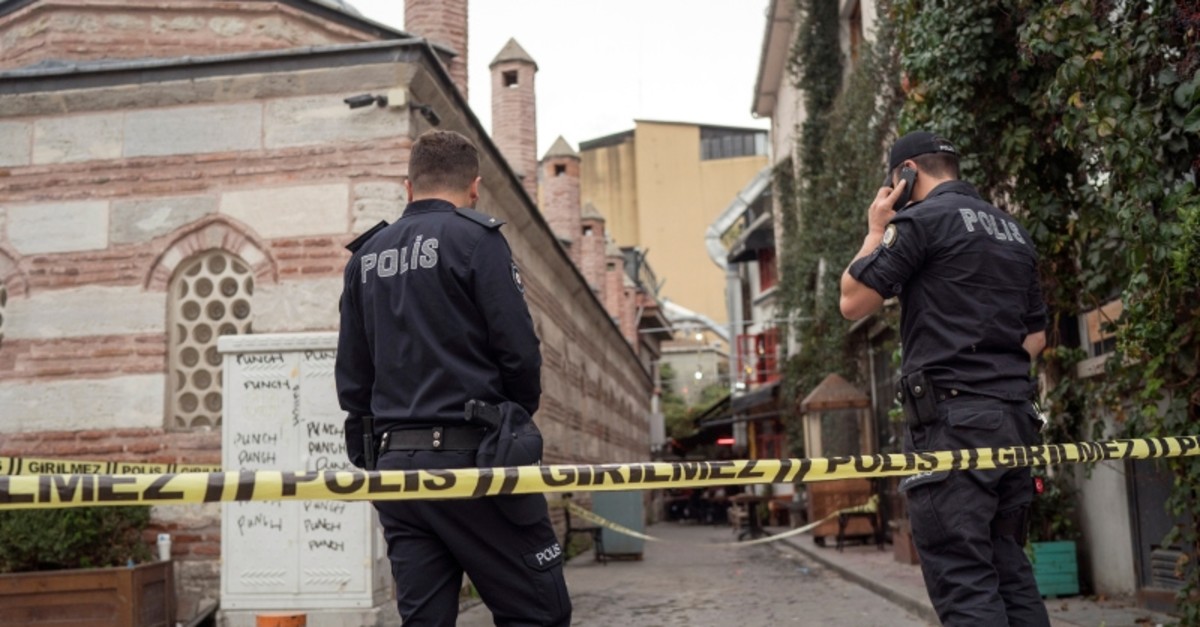 Police forensic officials work at the site after former British army officer who helped found the ,White Helmets, volunteer organization in Syria, James Le Mesurier's body was found in Istanbul, early Monday Nov. 11, 2019. (AP Photo)
by Daily Sabah with Agencies Nov 12, 2019 7:13 pm
Turkish officials expressed their determination yesterday to shed light on the death of White Helmets founder James Le Mesurier, who was found near his home in Istanbul on Monday.
"Our chief prosecutor's office, our police are engaged in multifaceted efforts to shed light on the incident," Istanbul Gov. Ali Yerlikaya told reporters.
So far, Turkish police believe that he fell to his death although they are still investigating the incident.
Le Mesurier's wife said in her statement that her husband had recently started to take sleeping pills and psychiatric medications due to stress disorder and the incident took place early in the morning while she was sleeping. It has been reported that the police will speak to his wife for a second time as well.
It was also reported that a package came to Le Mesurier’s office yesterday with the name of a Syrian national Nihad Sarmini on it. It was revealed later that Sarmini had shared a tweet following Le Mesurier’s death, expressing his condolences. On his social media account, Sarmini said that he is from the northwestern Syrian province of Idlib.
While the Forensic Medicine Institution has concluded its autopsy, it was reported that the investigation after the autopsy would take at least a month to conclude.
Le Mesurier was the founder and CEO of May Day Rescue, which established and trained the White Helmets, also known as the Syria Civil Defense, a group of local humanitarian volunteers. Anadolu Agency reported he was 48 and had moved to Turkey with his wife four years ago.
The White Helmets, known officially as Syria Civil Defense, have been credited with saving thousands of people in opposition-held areas during years of bombing by the Assad regime and Russian forces in the country's civil war.
Mayday Rescue is a not-for-profit organization with offices in Amsterdam and Istanbul whose projects have been funded by the United Nations and various governments.
Le Mesurier told Al-Jazeera in 2015 that he had begun training and supporting the organization in early 2013 alongside Turkish rescue experts, starting with "a single team of 20 people."
British lawmaker links Le Mesurier death with Russia
Meanwhile, a senior British parliamentarian said that he was "deeply concerned" to hear about the death of Le Mesurier.
The remarks by Tom Tugendhat, chairman of the Foreign Affairs Committee of the British House of Commons, came a day after the revelation of the death.
"His heroic work in defense of human rights in Syria has sadly made him many enemies, and Russian officials have frequently accused him of links to terrorist organizations," Tugendhat was quoted by the Financial Times as saying. He added that U.K. officials should be part of any investigation, according to the British daily. Britain's Foreign and the Commonwealth Office also said it was "deeply saddened" by Le Mesurier's death.
Russia has long accused the White Helmets, the informal name of the group known as the Syrian Civil Defense, of being a project by western intelligence services to undermine its ally Assad regime in Syria, according to the Financial Times.
"The intelligence services have warned against persistent Russian smears, of Mr. Le Mesurier over his support for the rescue group," The Telegraph reported.
Quoting an unnamed Syrian expert, the daily said Le Mesuriere had faced "unimaginable pressure and targeting as a result."
Last Update: Dec 20, 2019 1:38 am
RELATED TOPICS