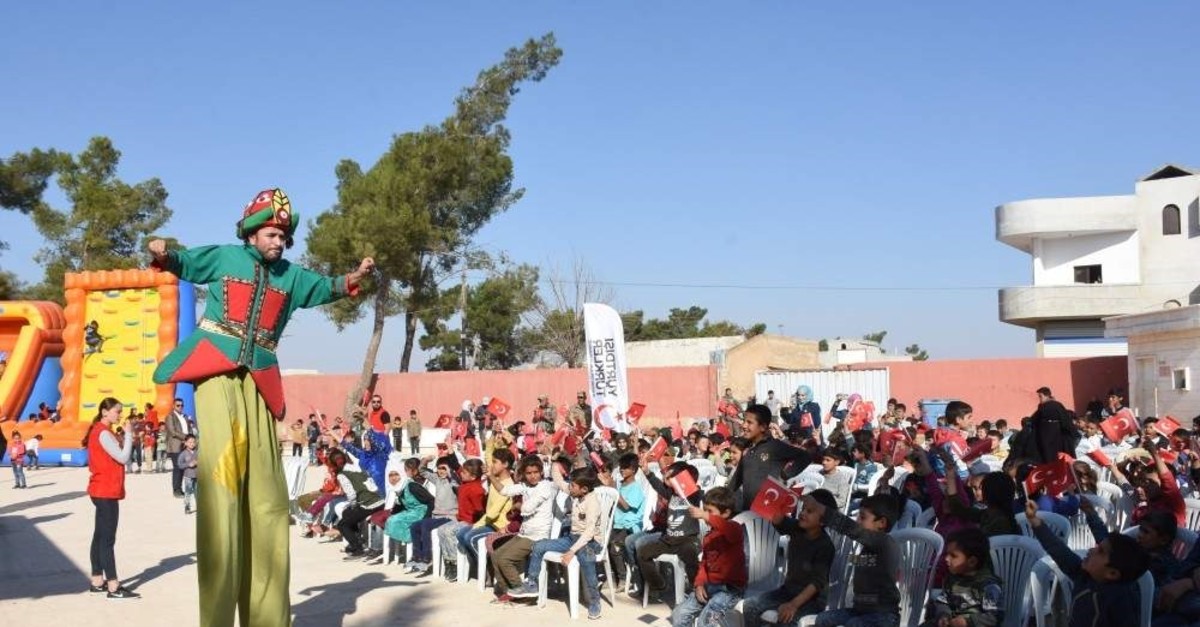 by Daily Sabah Nov 13, 2019 7:46 pm
A Turkish organization has launched a series of events that were planned to last for four days in various northern Syrian provinces on Monday with the aim of cheering up the locals, particularly children, under the scope of efforts to normalize everyday life in the region.
Organized by the state-run Turks Abroad and Related Communities Directorate (YTB), the events are taking place in the northwestern Syrian provinces of Jarablus, Çobanbey, al-bab, and Azaz, all of which have been liberated from the terrorist elements through Turkish cross-border operations conducted in the last three years.
During the events, 500 Syrian children came together in various cultural activities. The events were based on famous cartoons such as Rafadan Tayfa and cultural heritage shows such as Hacivat and Karagöz shadow play. There were also mini-concerts and competitions organized for children. A big event truck has traveled to the provinces to allow children to participate in such activities.
The YTB launched the events under the scope of its new program that is designed to have culture-based meetings in Syria. The four-day-long events were the first step of the program. The YTB also expressed from its Twitter account yesterday that their aim is to “bring a smile to the face of the children.” Through this program, the YTB aims to increase the familiarity of all the children and youth living in the region to the common cultural values while decreasing the effects of post-war trauma, especially among smaller children. Children living in orphanages have specifically been targeted.
Turkey launched Operation Euphrates Shield in 2016 to clear provinces west of the Euphrates, such as al-Bab and Jarablus, from Daesh and the PKK-affiliated People's Protection Units (YPG). Operation Olive Branch, however, was launched in 2018 toward northwestern Afrin province, again to clear the region of terrorist elements.
Following the operations, Turkey has also been involved in efforts to rebuild the towns' infrastructure as well as health and educational institutions. Schools are being renovated and a hospital is being built. The activities boosted the number of Syrians returning to their homeland from neighboring countries. Turkey has also spent more than $35 billion for the needs of refugees living in tent camps as well as those living outside the camps on their own so far.
Now Turkey has intensified her efforts to bring sustainable prosperity and development to the region amid ongoing conflict as it can be a model for the whole world.
Educational activities, vocational schools and education have been particularly prioritized in the region. For example, in Jarablus city center and its surrounding villages a vocational college, four high schools, 12 middle schools, 98 elementary schools and an educational center have been opened.
Accessible Living Centers for disabled children have been built within the scope of social services. The Public Education Center includes a kindergarten, four courses in computers, Turkish-language, hairdressing, and sewing and embroidery courses. Forty-four teachers from Turkey have been commissioned to teach Turkish in 60 schools for students and in six centers for adults.
Last Update: Dec 20, 2019 1:40 am
RELATED TOPICS