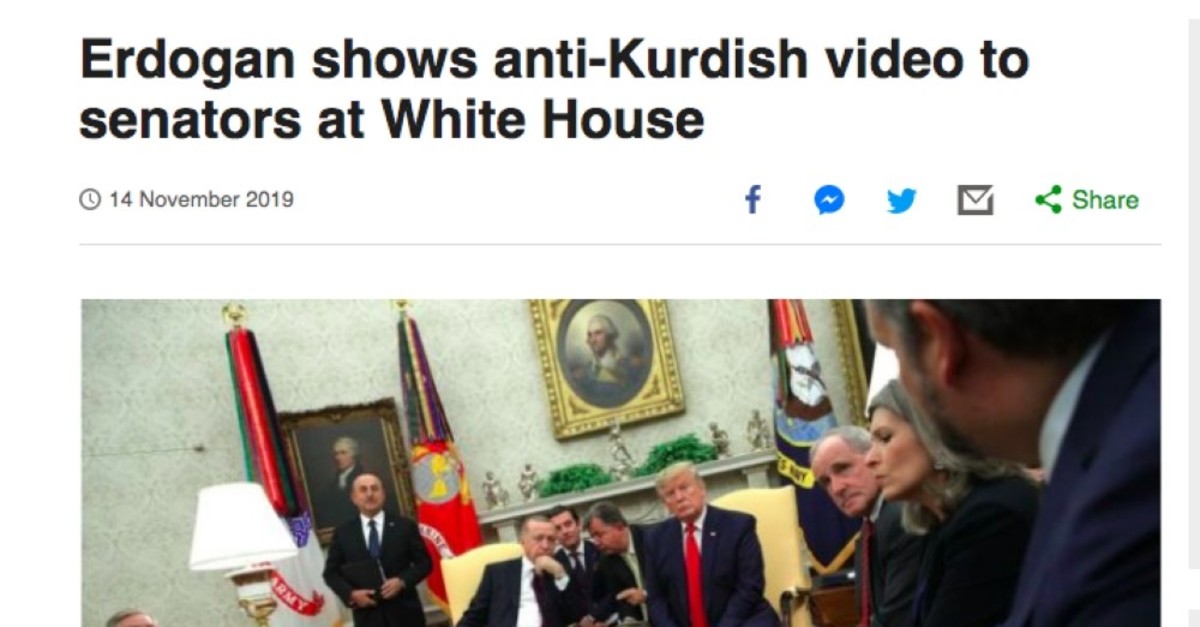 Screen Shot 2019-11-16 at 3.30.45 PM
by Daily Sabah Nov 16, 2019 4:14 pm
The BBC wrongly referred to a video about a wanted terrorist as “anti-Kurdish,” even though the video specifically focused on the crimes committed by the terrorist and had nothing against the ethnicity.
In an article headlined “Erdogan shows anti-Kurdish video to senators at White House,” the BBC completely ignored the fact that the video shown by the Turkish president during his White House visit solely focused on Ferhat Abdi Şahin, codenamed Mazloum Kobani, who is one of the ringleaders of the PKK-linked People’s Protection Units (YPG) and is sought with an Interpol Red Notice.
Şahin has caused the deaths of hundreds of Turkish people and is the adopted son of Abdullah Öcalan, the jailed leader of the PKK terrorist organization.
The video played by Erdoğan showed the massacres committed by Şahin, including the terrorist attack in July 2008, which claimed the lives of 17 people in Istanbul, five of whom were children.

Here is the video that was shown to President Trump and US senators by President Erdogan yesterday during their meeting at the White House.
The video details the massacres committed by the terrorist code named Mazloum Kobane. pic.twitter.com/KFexW9hvMy

Contrary to the BBC’s baseless claim that the video was anti-Kurdish, the video highlighted that Şahin was a terrorist leader and made no mention of his ethnic background.
Erdoğan said he submitted some CIA documents which suggested that Şahin is a terrorist.
"The CIA also documented him as a terrorist and they sent us these documents, and then we presented them to Mr. President today," Erdoğan said in Washington on Thursday, without elaborating how the intelligence organization provided the documents to Ankara.
Turkish officials repeatedly warn Western leaders and media outlets that ethnicity and religion are irrelevant when it comes to terrorism.
“Terrorism has no religion or nationality,” President Erdoğan said many times, urging Western powers to condemn terrorism regardless of who’s behind it.
Erdoğan has also warned Western leaders to distinguish between the terrorist PKK-linked organizations and Kurds as an ethnic group.
Turkish officials stress that Turkey does not have any problems with the Kurds but fights against terrorist organizations regardless of their ethnicity or religion.
For instance, Turkey accepted over 350,000 Kurdish civilians fleeing YPG persecution in Syria’s Ayn al-Arab (Kobani), according to President Recep Tayyip Erdoğan.
However, the YPG terrorists exploit ethnic and religious sentiment to provoke violence.
While the U.S. President Donald Trump urged Turkey to avoid carrying out a cross-border operation in northern Syria, Ankara proceeded with plans and launched Operation Peace Spring on Oct. 9 to clear the border to ensure security and establish a safe zone to facilitate the voluntary return of around 2 million refugees.
Trump previously acknowledged that the PKK is worse than Daesh.
“The PKK, which is a part of the Kurds, as you know, is probably worse at terror and more of a terrorist threat in many ways than ISIS," Trump told a news conference at the White House last month, using a different acronym for the Daesh terrorist group.
He then said the U.S. was making the YPG "look like angels."
Last Update: Dec 20, 2019 1:43 am
RELATED TOPICS