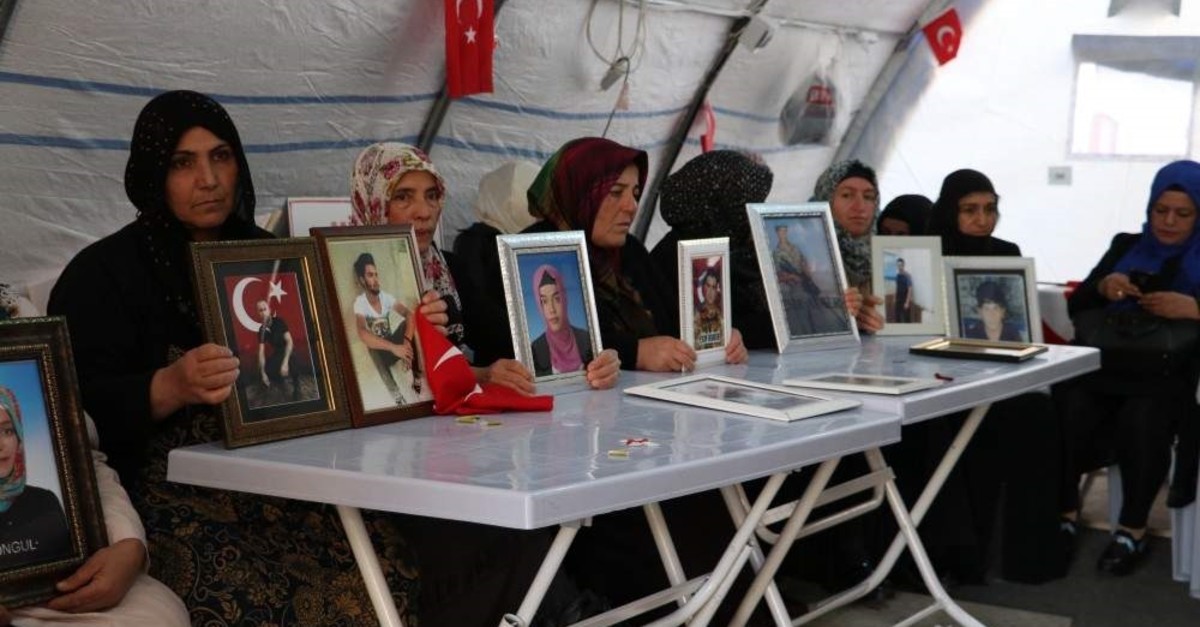 Kurdish mothers holding pictures of their children abducted by the PKK terrorist group during a sit-in protest in Diyarbak?r, Nov. 19, 2019.
by Daily Sabah Nov 19, 2019 6:21 pm
Forty-six Turks from various European countries arrived in southeastern Turkey’s Diyarbakır yesterday as a sign of support for Kurdish mothers protesting in front of the pro-PKK Peoples' Democratic Party (HDP) headquarters. The mothers have been participating in a sit-in against the PKK, looking to be reunited with their children who they say were abducted by the PKK.
Hailing from France, Switzerland, Germany, Belgium, Austria and the Netherlands, the group came to Turkey with the intention of highlighting this cause in Europe when they return.
“On behalf of European Turks, we took to the road with our own means and came here. We will try to create awareness about this everywhere we go. As 46 people coming from six European countries, we have decided to be honorary Diyarbakır locals,” said one of the visitors, Ali Koç, speaking on behalf of the group.
Since the beginning of their protest, the mothers have received support from all around the country with almost all segments of society expressing solidarity with their cause. On Saturday, 50 female teachers employed throughout Diyarbakır, who wished to share the sorrow of the families, paid a surprise visit and sat side-by-side with the mothers.
Initially, a lone mother Hacire Akar started the protest in front of the offices of the HDP in Diyarbakır in September. Akar wanted her 21-year-old son Mehmet Akar, who had been missing for three days after he was abducted by the PKK terrorist group, to be returned to her. Following her sit-in, and with the help of security forces in Diyarbakır, Akar was finally reunited with her son.
It’s been 79 days since the mothers started their protests that are currently ongoing with the participation of 56 Kurdish families.
Mevlüde Üçdağ has been participating since Sept. 9, wishing to be united with her 22-year-old son Ramazan who has been missing for the last five years.
“I am calling on 81 provinces. Please come here to support us. I beg you to look for our children together. If we cannot wait for our children, what else is there worth waiting for?” she asked yesterday.
She also addressed her son.
“If you hear me, please speak up. Drop your weapon. Our state is strong; I promise you there are no punishments waiting for you. Please, I beg you to surrender whenever you see a police officer or soldier,” she said, adding that her house would be a happy place only if her son returns.
Last week, the Interior Ministry launched a new initiative to urge abducted children to surrender to security forces. Families are involved in the process, informing security forces about their children while calling on the children to surrender. The initiative also ensures that the children, as long as they do not commit any crimes in Turkey, will not be charged and be able to continue their lives once they testify. So far, 214 children have been saved from the PKK with this new initiative.
Last Update: Dec 20, 2019 1:47 am
RELATED TOPICS