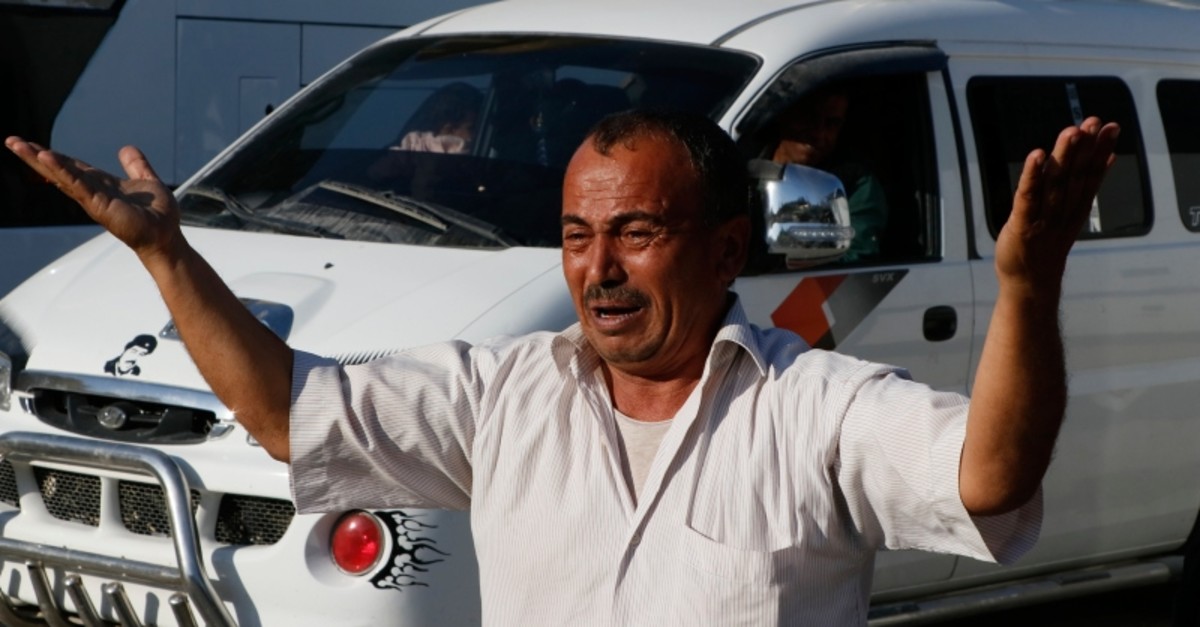 Syrian refugee Ahmed el Abdullah Ibrahim cries as he returns home in Tal Abyad after 5 years (AA Photo)
by Daily Sabah Nov 21, 2019 4:08 pm
Syrian refugees who had to flee because of the endless civil war are now starting to return to their homes after northern Syria was cleared of terrorists following Turkey’s Operation Peace Spring last month. Upon their arrival, most citizens say they feel joy to finally be able to return to their country although the destruction caused by terrorist groups has also caused them great grief.
One of these families is that of Ahmet el Abdullah İbrahim who returned to his birth country five years later. İbrahim shed tears when he stepped onto his country's soil, yet was filled with grief seeing the area where his home a wreck.
“I came here for the first time after Operation Peace Spring. Five years have passed. What did they want from a civilian, what did they do to my home? What they did is oppression and torture,” the man stated to Anadolu Agency, adding that due to the situation of his house, his family of six is staying at his relatives.
Saying that the greatest happiness for him is that the region was freed of terrorists, İbrahim thanked Turkey for being by the side of the Syrian people.
Tal Abyad together with other liberated places has been put back on the road to normalization with reconstruction work. Citizens frequently voice that every day is getting better as a result of the reconstruction of the infrastructure, schools, and hospitals while roads and waterworks are also repaired.
“The situation of our house is no problem; we can repair it, erect it again,” stated İbrahim.
Muhammed el Mustafa, on the other hand, is happy to be hosting the İbrahim family and rejoining his relatives. Mustafa, who believes that the people of Tal Abyad will in return to their old blissful days very soon, continued, “People have been sent away from here. Our relatives have also returned to their country today, they moved to us since they have no home. Fortunately, we are well, security is provided.”
According to recent statements by the Interior Ministry, Turkey has facilitated the return of 368,217 Syrian refugees. Since 2016, Turkey has also conducted three successful operations in northern Syria against the PKK-affiliated People's Protection Units (YPG) and Daesh terrorists: Operation Euphrates Shield (2016-17), Operation Olive Branch (2018) and most recently Operation Peace Spring.
Operation Peace Spring, launched on Oct. 9, aims to eliminate terrorist PKK's Syrian affiliate YPG elements from northern Syria east of the Euphrates River in order to secure Turkey's borders, aid in the safe return of Syrian refugees, and ensure Syria's territorial integrity.
Turkey has also restored an Armenian Orthodox Church that was used by the YPG as a military base in Tal Abyad and re-opened it for worship. The YPG terror group has many times used civilian settlements and places of worship as cover to target Turkey after Ankara launched a counterterror operation in northern Syria.
Tal Abyad is populated to a great extent by Arabs and was occupied by the Daesh terrorist group in 2014. A year later, the YPG occupied the city with the support of the U.S. Tal Abyad was cleared of terrorists as part of Operation Peace Spring on Oct. 13. Since then, locals have gradually returned with humanitarian aid being provided with the help of the Turkish Armed Forces and the Turkish Red Crescent.
Tal Abyad border gate to open
Turkish teams that operate in northern Syria as part of the construction efforts, plan on opening the border of Tal Abyad in order to facilitate primarily the shipment of humanitarian aid. Meanwhile, public institutions that proceed their works across the border in the presence of the Şanlıurfa Governorship Provincial Coordination and Operation center while removing the debris loaded by terrorists to hinder access. The teams that try to erase the traces of terrorism around the border have also renewed the road system. While inventory works for public buildings continue under the instruction of Şanlıurfa Gov. Abdullah Erin, damaged and unusable buildings are planned to be reconstructed and opened for service.
Last Update: Dec 20, 2019 1:50 am
RELATED TOPICS