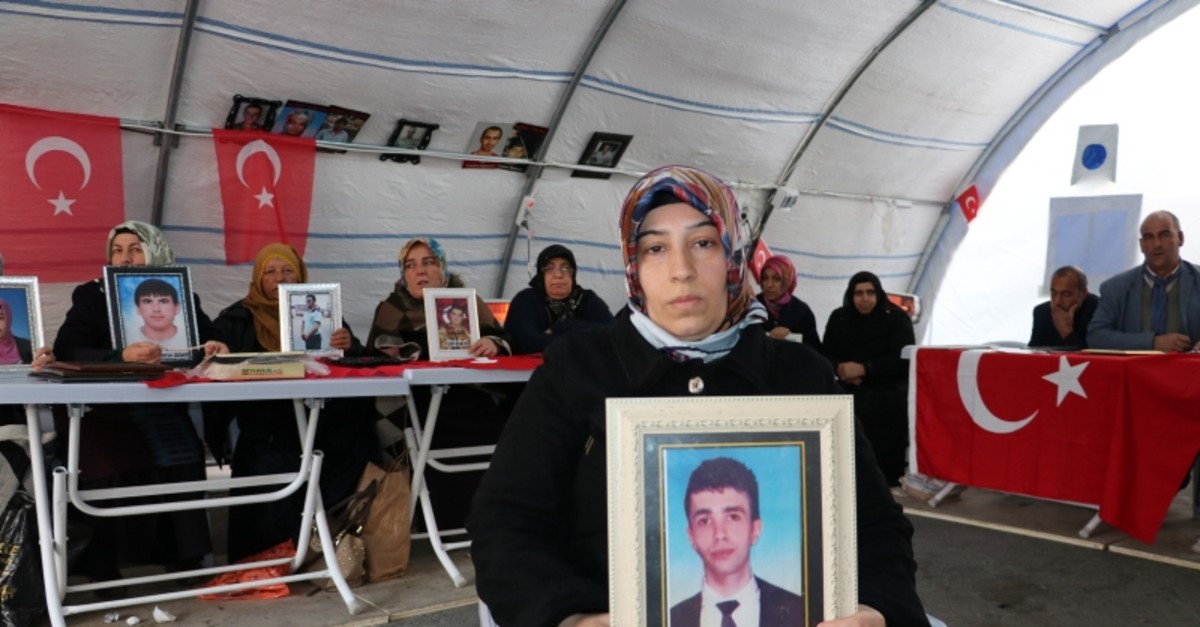 |AA
by Daily Sabah Nov 24, 2019 3:22 pm
The Kurdish mothers that have been protesting the pro-PKK Peoples' Democratic Party (HDP) for abducting their children for recruitment in terrorist organizations have said that the HDP is taking vengeance on them for not voting for the party. Still resisting on the 83rd day of the sit-in taking place in front of provincial HDP building in Turkey's southeastern province of Diyarbakır, the mothers maintain their determination in the face of ill-health and fatigue.
Urging the public not to vote for the HDP, one of the mothers Ayten Elhaman stated that, “As they get votes, they get stronger. They take vengeance on us because we did not vote for them. I want my son. What did they want from us? I will not leave this protest until I get my son. We will be here even after 82 years.”
Elhamam explained that she could has been unable to contact her son Bayram for two years. “I sent my child to work in May 2017. That was it, his friend brought him to the HDP building,” she continued. Elhamam added that two of her relatives had been killed by terrorists in 1990 and that she could not attend the protest in the daytime since she had to look after her disabled child. Holding a photo of her son, she stated “My son, if you hear me, grab a pen – not a gun. Your siblings are waiting for you.”
The sit-in protests are seen as a reaction against the outlawed PKK, a terror group which has abducted and recruited their children, as well as the HDP, a political party which many of these families view as in league with the PKK. The protest has continued since Sept. 3, with 57 families in total currently protesting, including five Iranian families whose children were abducted by the PKK's Iranian wing, the Kurdistan Free Life Party (PJAK). The protest started when Hacire Akar turned up at the doorstep of the HDP's Diyarbakır office one night. A week later, on Sept. 3, 2019, families inspired by Akar transformed her solo stance into a collective sit-in protest. Akar's son Mehmet returned home on Aug. 24, showing people that there is still hope.
“We will not abandon our cause. We will get our children back. All of the mothers are sick, they are worn out,” Elhamam added.
Another mother facing the same situation, Emine Kaya accounted for her solid determination in Kurdish, stating: “I have been missing my son for five years. We think about him day and night. We can not sleep, our lives are a nightmare.”
Although the mothers started the protest, fathers are also present. One such, Şahap Çetinkaya, claimed he would remain until the safe return of all the children was secured.
Latife Ödümlü, meanwhile, is struggling to secure the return of her 23-year-old son, who was studying chemistry at Dicle University until he was abducted and taken to the mountains. Ödümlü lamented that she has to leave her bedridden husband to participate in the protest.
Şeyhmus Kaya, whose three sons are teachers, commemorated Teacher’s Day with the hope of rejoining his son Vedat Kaya. The father, who protests together with his wife, explained that his son Vedat was a police officer returning from his brother’s wedding in Muş when PKK terrorists stopped him on the road and took him.
The HDP, long facing public reaction and judicial probes over its ties to the PKK, is under pressure due to this growing civilian protest movement launched by mothers and local families. Meanwhile, various groups from all around Turkey have supported the Kurdish mothers in their cause, with many paying visits to show their support.
The HDP is also known for encouraging young people to join the terrorist organization. That is to say, children abducted by the PKK are first radicalized by the HDP. The would-be recruits are then used as an instrument for propaganda and are forced to work. Specialists define four stages of radicalization, the first of which is brainwashing, thereby encouraging the young to join the terrorist organization. This is followed by the armament, violation and finally, leaving to join the organization in the mountains.
The PKK has been involved in a 30-year campaign of terror against Turkey. The terrorist organization is responsible for the deaths of some 40,000 people, including women, children and infants.