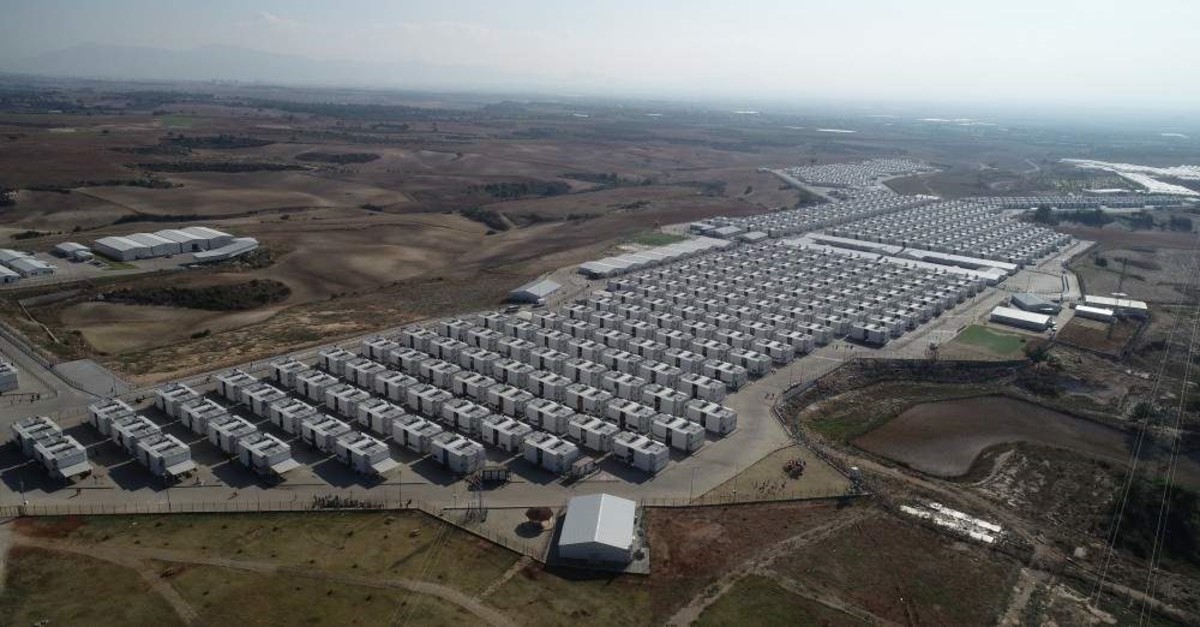 A temporary refuge center in southern Turkey provides Syrian refugees with everything they need from health care to education with its capacity to host 30,600 people.
At the Sarıçam Temporary Refuge Center in Adana province, Syrian refugees enjoy the hospitality of Turkey in a complex that has sports fields, playgrounds and shopping malls as well as services such as health care facilities with emergency sections and education with eight schools that serve 9,100 students with 198 teachers.
Including the eight masjids, 11 Quran classes and public education centers, there are also green housing courses where refugees learn about planting and get the chance to grow their own vegetables.
After the Syrian civil war broke out in 2011, Turkey adopted an “open-door policy” toward Syrians fleeing the conflict, granting them “temporary protection” status. Since then, Turkey has received a constant flow of displaced Syrians fleeing the conflict and their numbers have expanded from mere thousands to millions. Currently, the country is home to some 4.5 million Syrian migrants who fled the civil war.
According to Sarıçam's District Governor Ali Murat Kayhan, the center was initially designed as a tent city back in 2013 and then turned into a container city in 2017.
“As it turned into a container city, the capacity has risen to 30,600. This is the biggest container city in our country where the basic needs of the Syrians are being met. It is also the biggest container city in the world with largest capacity,” Kayhan told Anadolu Agency (AA).
Kayhan said that the center has enough capacity of clean water, water for use and hot water. In order to provide foods, the markets are available, the governor said.
“Containers are duplex with a bathroom and toilet where up to four people can live. The residents of these containers are Syrians who took refuge in our country due to the civil war,” he said.
Underlining that as Turkey has taken all the measures it can to provide livable, humane conditions for the Syrians, Kayhan stated that he believes refugees who take training courses in these centers and gain a vocation out of it will be able to pursue these vocations when they return to Syria.
“Until now, we have provided vocational training courses to almost 10,000 Syrians and gave them certificates. They continue to produce things [thanks to these activities]. Their activities on confection courses also continue,” he said.
Sharing a 911-kilometer border with its southern neighbor, Turkey has repeatedly proposed establishing a safe zone in northern Syria to stop further refugee influxes into its own territory and into Europe, and to relocate Syrians living in migrant camps in Turkey while providing conditions allowing others to return.
“They all left their hometowns, houses, villages and came here. They have been through many troubles. Thus, we have opened our doors by taking all these into considerations. They are also aware of this. They are all aware of our country’s sacrifices,” Kayhan expressed.
Turkish officials have put forward humanitarian efforts to meet the basic needs of refugees by offering them various forms of assistance and helping coordinate international aid. Modern camps provide refugees access to all basic services, from education to vocational training courses. Compared to refugee camps in many Western countries, Turkey maintains much better standards despite hosting much larger populations.
Ankara has often criticized the international community for not providing sufficient humanitarian aid for the refugees in Turkey and not taking in more refugees. Turkey has spent nearly $40 billion so far, while it has only received about 6 billion euros ($6.6 billion) of support from the international community.
One of the residents of the center, Mohammed Dibez, who took refuge in Turkey back in 2013, said that he is very content with the services that the center provides.
“We are thankful, we don’t have anything missing,” he said.
“My mind was at peace in here. My children are also with me. The services here are good. Especially when it comes to health,” said another resident Hatice Abyad, who came to Turkey six years ago with her family.
“I can take my children to the doctor and but their medicines are from here. I can get use out of the markets, can make purchases with our shopping cards. I have also learned handicrafts here, which has been very beneficial for me,” she said.
Last Update: Dec 20, 2019 1:53 am
RELATED TOPICS