Ankara should maintain interests in East Med with proactive approach 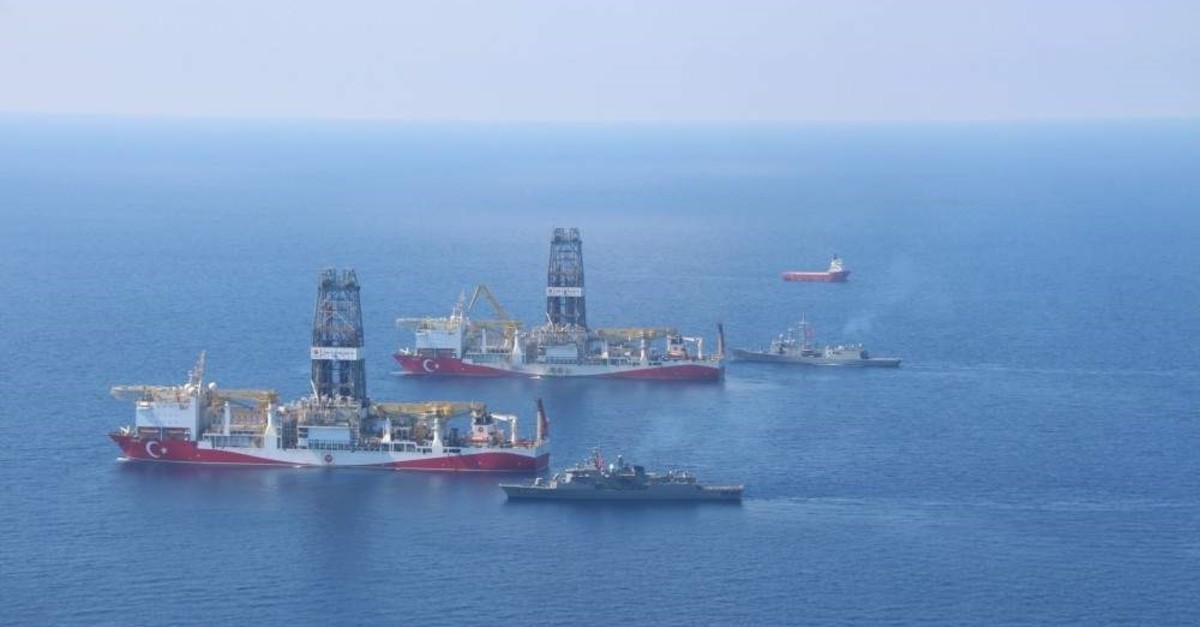 Ankara has said it will not hesitate to take any steps to protect Turkey's and Turkish Cyprus' right over the resources in the region.
by Mustafa Kırıkçıoğlu Nov 25, 2019 2:25 pm
The fierce debates over maritime borders between riparian states in the Eastern Mediterranean have deepened since a decade ago when it was announced that the region held a significant amount of hydrocarbon reserves. New alliances quickly emerged to provide maximum benefit through lucrative agreements.
Particularly, a convergence has developed between Egypt, Israel, Greece and the Greek Cypriot Administration, which is also supported by the U.S. This axis, inherently, has tried to push Turkey back to its shores, diminishing its rights emanating from international law by reaching agreements through unilateral initiatives.
“Other states have forced Turkey to take a swift position. However, having an advantageous position, Ankara should protect its rights calmly and continue its proactive foreign policy instead of taking reactive approaches,” Levent Yılmaz, an academic at the Turkish Police Academy, told Daily Sabah.
There are many disagreements on the Exclusive Economic Zones (EEZ) determined by countries, which give them the right to use marine resources and make international deals in this regard. One of these disagreements has been Turkey’s rift with Greek Cyprus, which intensified after the Cypriot administration unilaterally declared a total of 13 so-called parcels in the Eastern Mediterranean as its EEZ and allowed international oil and drilling companies to operate in these areas. Ankara, however, has answered to this move by sending two drilling vessels – Fatih and Yavuz – to the Eastern Mediterranean, asserting the rights of Turkey and the Turkish Republic of Northern Cyprus (TRNC) to the resources of the region.
Stressing that Ankara has reinforced its naval engagement in the Eastern Mediterranean with new naval drills such as Blue Homeland, Yılmaz said the Turkish government already showed its determination to protect its interests and now it should maintain its advantageous position since “the commercialization and distribution of these reserves will most probably be performed by way of Turkish soil.”
“This is the most feasible way. There are some impractical plans which are occasionally voiced, such as using the Greek islands and Italy for gas delivery, but masterminds of these ideas are also very aware of their infeasibility,” Yılmaz said.
Ankara can cooperate with Lebanon, Libya
While the tension between Ankara and Greek Cyprus, and its backers, emanating from gas fields has come to the surface, another conflict has emerged in recent years in the southeastern part of the Mediterranean between Lebanon and Israel, who have technically been at war since 1948. Defying Tel Aviv’s assertive steps and threats, the Lebanese government agreed to a consortium of France’s Total, Italy’s Eni and Russia’s Novatek that will begin exploration in December off the coast north of Beirut. The companies are supposed to start drilling in January 2020, including in Block 9, which is one of the two blocks containing disputed waters with Tel Aviv.
Pundits said that the exploration can help in meeting domestic demand and thereby alleviate the woes of Lebanon’s economy, which has been devastated for decades due to wars and internal conflicts, and also might create an opportunity for export. At that point, Turkey, another country that various actors have tried to corner, emerges as a candidate for possible cooperation for Lebanon.
Nader Ghazal, an adviser to former Lebanese Prime Minister Saad Hariri, told Daily Sabah that Turkey and Lebanon have a good economic relationship and this cooperation can also be expanded to the gas issue.
“Considering the capabilities and technology Turkey has for drilling and exploration as well as distributing gas, I think we can have a good deal, which would be very important for us,” Ghazal said.
“We have a shared enemy, which is like a dragon and wants to eat anything opposing it,” he added.
Speaking on the issue, Yılmaz said that Turkey should increase dialogue with any related international organizations and develop cooperation with regional countries such as Lebanon and Libya.
“We should initially clarify one point: With the most optimistic estimations, the gas reserves in the region correspond with 5% of total reserves in the world, which would not be a game-changer. But considering that all actors in the field are energy importers, we can consider that kind of cooperation important,” he said.
Last Update: Dec 20, 2019 1:55 am
RELATED TOPICS