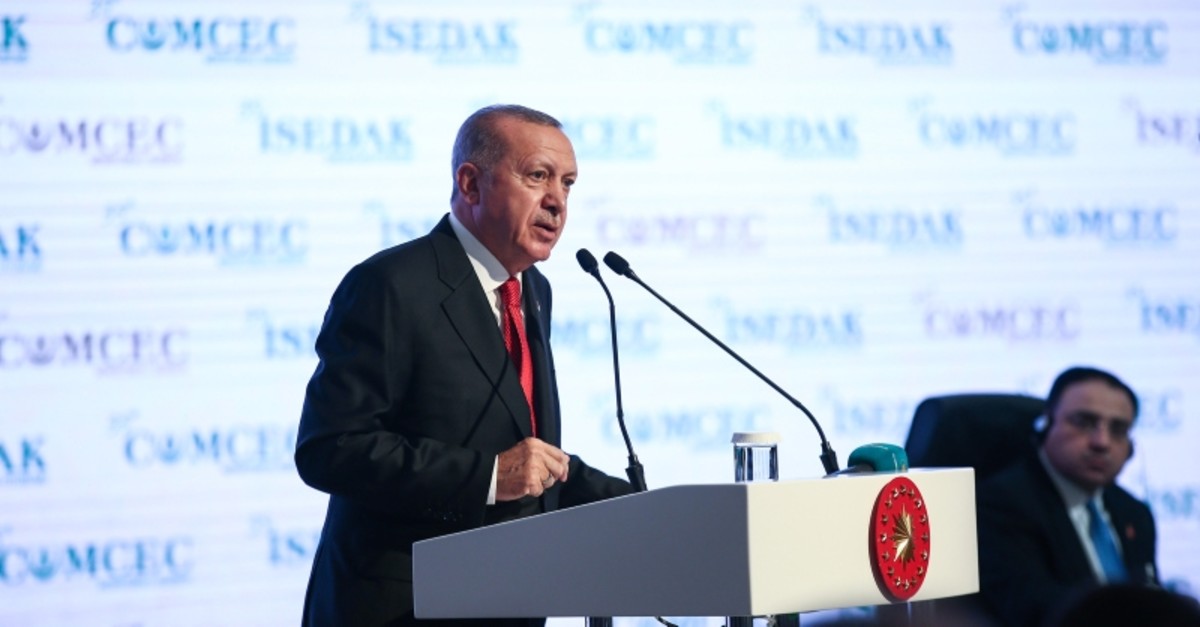 The Islamic world is easily manipulated because Muslims are not a tight-knit community, President Recep Tayyip Erdoğan said Wednesday.

The president highlighted that Muslim-majority countries are facing many threats, including terrorism and civil war, on top of a rise in xenophobia.

“The terrorist organizations shed blood in our marketplaces, mosques and schools,” Erdoğan said, in reference to groups that carry out terrorist attacks under the name of Islam.

He continued by noting that Muslims are powerless, inactive and are not fairly represented in international organizations.

“The Islamic world has no prerogative to make and implement decisions to determine its future,” Erdoğan said, noting once again that there is not a single Muslim country in the U.N. Security Council and that the unjust system cannot prevail.

“We need to first believe in ourselves. As the Organization for Islamic Cooperation (OIC), we need to recognize our power, comprehend ourselves and determine our attitude accordingly. The U.N., which failed to find solutions in Bosnia-Herzegovina, Rwanda and Syria will not find solutions to our problems,” he said and suggested that the Security Council’s structure needs to be shaped taking into consideration of the world population.

He repeated his call to restructure the U.N. and argued that Muslims need to be the defenders of justice in the 21st century.

He extended his for call fraternity beyond favorable relations among Muslims by suggesting that Muslim countries should mobilize to cooperate in technical, trade, cultural and social affairs.

Erdoğan also urged the U.N. and other global organizations to designate March 15 as “International Solidarity Day Against Islamophobia.”

Turkey has voiced its concern about growing anti-Muslim sentiment and attacks targeting Muslims in the West.

Turkey, along with Pakistan and Malaysia, has also proposed to establish a joint media and communications center against anti-Muslim racism.

Anti-Muslim hatred has significantly risen in Europe in recent years. Far-right extremism and xenophobia have fueled anti-Muslim hatred in Western countries, where terror attacks by Daesh and al-Qaida are used as an excuse to legitimize those views.
Although enmity toward Muslims is not a new phenomenon, it intensified after 2001 when two airplanes crashed into the World Trade Center in New York City. Since then, for almost two decades, Islam has been unjustly tarnished with labels that have negative connotations and portrayed as a religion of hate and violence with anti-Western sentiment and women's oppression. This trend of intolerance has since triggered deadly attacks against Muslims and immigrants.

With growing racism emerging as a serious problem in almost all EU states, citizens of foreign origin are more vulnerable in some countries. For instance, in Germany, Muslims have become targets of countless attacks in recent years.

Touching upon the Palestine issue, President Erdoğan said Muslims should also take a determined stance against Israel’s injustice. “By not respecting Palestinian people's right to live and work in peace, Israel is jeopardizing the future of the world and the region,” he said and added that Turkey is determined to defend the rights of Palestinians on all platforms.