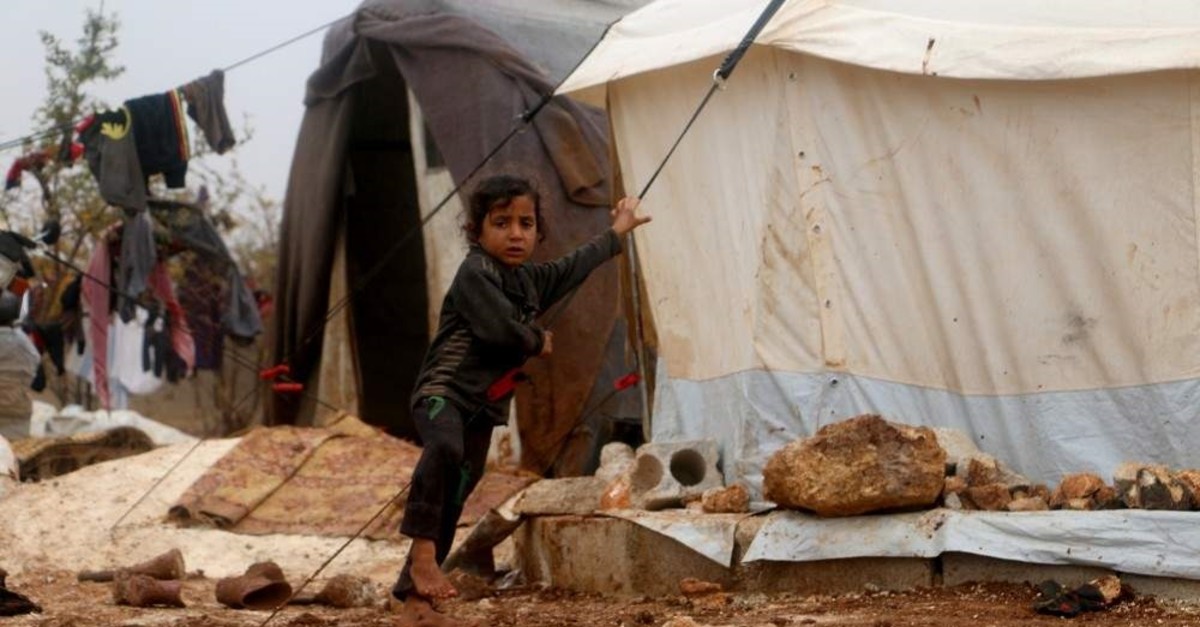 Syrians displaced from northwestern Idlib province due regime attacks are now suffering from hunger and cold in camps along the Turkish border.

The conditions in the camps have worsened significantly as nonstop rain over the week has flooded tents with water.

“We are cold and hungry. We have not seen rice or bulgur for six months. We were already poor people in our village. However, the situation is worse here,” said 65-year-old Ayşe Casim, one of the residents of the Sarot camp which currently hosts 117 families.

“If we did not receive aid, we would have died,” she said to Anadolu Agency.

Despite eight months of calm provided by the Sochi deal between Turkey and Russia last September, the regime, backed by Moscow, intensified its attacks in April under the pretext of fighting Hayat Tahrir al-Sham (HTS) terrorists holed up in Idlib. Since then, the situation has gotten worse, taking the lives of countless civilians. Residential areas have been destroyed by indiscriminate attacks, while numerous educational centers, health facilities and residential areas have collapsed or become unusable after being bombed.

As a result, hundreds of thousands of people have left the province and moved toward Turkey, settling in the camps near the border. In September, the Turkish Red Crescent announced that the number of civilians fleeing Idlib and heading to the Turkish border had reached almost 500,000. The population of the Atmeh refugee camp, which has a capacity of 600,000 people, has reached 1 million in just three months due to refugees fleeing Idlib.

According to the manager of the Sarot camp, Heric Casim, the most significant need of the camp is currently fuel for heat, canvases and food supply. “Only one of the 117 tents has a heater,” he said.

“There are 117 families living here. Whenever there is rain, we are flooded by water. Twenty-five of the 117 tents do not have any canvas. Since oil and diesel fuel are quite expensive, we cannot buy it. People had to warm themselves with blankets. However, for the cold here, blankets are not enough,” he underlined, indicating that people do not even have money to buy bread.

Pointing to the conditions of the children in the camp, Ayşe Casim said that since they play a lot, they get hungry even more than the adults. “They constantly need food. But there is none,” she said.

Last weekend was particularly violent in Idlib with 96 people killed in 48 hours due to clashes between opposition forces and the Bashar Assad regime.

According to the Syrian Observatory for Human Rights (SOHR), regime forces, supported by Russian fighter jets, clashed with opposition groups on several fronts in the southeastern countryside of Idlib over the weekend.

The Britain-based watchdog said it was the heaviest loss of life since a Russian-brokered cease-fire came into effect in late August.

The clashes further escalated after it was reported on Sunday that the Syrian National Army (SNA) and opposition groups took back four settlements that were occupied by the Syrian regime in Idlib.

According to military opposition sources, the SNA regained the southern villages of Aciz, Resim al Varad, Istablat and Suruc after intense clashes with regime forces.

Activists based in Idlib stated that the battles and the heavy airstrikes by Syrian regime forces led to a new wave of displacement from the war-torn province toward the Turkish border.

Still, despite all the concerns regarding the condition of civilians, the Syrian regime seems to be overlooking the issue as it continues attacks.

On Monday, Russian airstrikes killed at least 14 civilians during attacks on the districts of Maarat Al-Numan, Saraqeb and several villages in the northwestern province of Idlib, according to the White Helmets. The volunteer group launched various search and rescue efforts following the airstrikes. The Turkish Defense Ministry noted that 27 others were wounded in the airstrikes.

"The market was packed with civilians, leading to a massacre and widespread destruction," the White Helmets announced on their Facebook page alongside photos of its paramedics removing bodies from a market in Idlib.

The de-escalation zone is currently home to some 4 million civilians, including hundreds of thousands displaced in recent years by regime forces from throughout the country.

The Syrian Network for Human Rights (SNHR) released a report on Sunday, showing that a total of 277 civilians were killed in Syria during the month of November alone.

The report revealed that 72 of the killed civilians were children while 32 of them were women. It also showed that the majority of the civilians were killed by the regime or Russian forces.