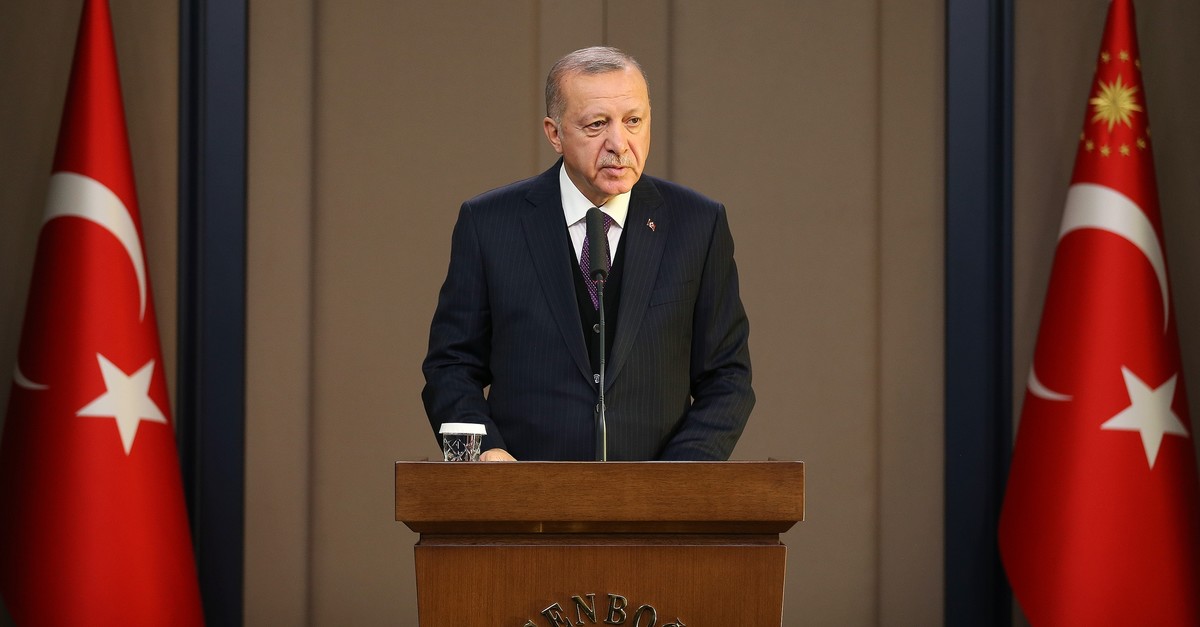 Ahead of the NATO summit in London, President Recep Tayyip Erdoğan highlighted the need for renewed alliance amid the current global situation, while urging member countries to show solidarity in the face of terror threats.

“We have to implement a renewal with all member countries that will ensure a principled and decisive stance against terrorist organizations. We expect them to be involved in work to strengthen the bloc rather than seeking alternatives," the president said in Ankara yesterday before his departure for London.

While topics such as the establishment of a safe zone in Syria and Turkey's fight against terrorism are likely to dominate Ankara's agenda, the two-day summit will be a reflection of the alliance’s future process and how to boost cooperation following French President Emmanuel Macron’s remarks, calling NATO “brain dead.”

The president noted that Turkey expects the allies to seek ways to boost cooperation within the bloc rather than looking for alternatives. Erdoğan referred to solidarity and unity as the "building blocks" of NATO, as he urged allies to refrain from making populist statements that may damage the strength of the alliance.

"We cannot comprehend the current situation with the mindset of the 2000s," Erdoğan told reporters at Ankara’s Esenboğa Airport.

He continued by saying that Turkey prioritizes the bloc's unity and pursues a multilateral foreign policy with its allies. "NATO needs to act proactively in the face of asymmetrical threats stemming from terrorist organizations," he added.

The fight against Daesh has also been on the agenda of several countries. The president said Turkey’s fight against Daesh continues with great determination. “We are the only country to fight Daesh in Syria on the ground and defeat the organization. Even though some malevolent circles try to shadow our country’s NATO membership, our place and stance are certain.”

The president also underlined that what happens across Turkey’s southern border, which is also NATO’s border, concerns Europe and all other members as well. He added that terrorism, conflict and migration threaten the stability of the European Atlantic geography. Erdoğan said, “With this trait too, our country is an essential ally of NATO.”
The president further pointed out that NATO, as an international organization taking place in the middle of Turkey’s security and defense plans, is substantial for the country. However, he said that the alliance still needed reform.

Turkey, a substantial constituent of NATO

A member of the bloc since 1952, Turkey boasts NATO's second-largest army after the U.S. Turkey is also currently one of the five countries that contribute most to NATO missions and operations using advanced technology on land, sea and air.

“We are one of four countries that provide the alliance with feeder line aircraft and early warnings in the air. In the sea, on the other hand, we contribute with our power elements to NATO’s permanent sea force in all its periods. We rank eighth in contributing to the joint NATO budget,” Erdoğan said, also stressing that the country spends almost 1.9% of its GDP in defense, keeping it very close to the 2% target.

Macron, following his recent criticism of the alliance, said that Turkey should not expect any solidarity regarding its operation in northern Syria to fight terrorists. Senior Turkish officials criticized Macron’s statements undermining NATO's main principle, which is based on the solidarity of its allies.

Before the summit, U.S. President Donald Trump showed his support for Erdoğan indicating that he likes “good NATO member Turkey” and gets along with the country's president. Against all recent disputes, Turkey's relations with the U.S. seem to be back on track thanks to Erdoğan and Trump's efforts in enhancing cooperation.

One of the highlights of Erdoğan’s NATO summit is expected to be a quadrilateral meeting at 10 Downing Street on the sidelines with British Prime Minister Boris Johnson, German Chancellor Angela Merkel and Macron regarding its anti-terror operation in northern Syria.

Indicating that he will present Turkey’s plans on the safe zone to the leaders, Erdoğan said, “Some NATO countries said that they do not view the [People's Protection Units] YPG terrorist organization as a threat. Yet, it is a threat to Turkey.”

The leaders will start formal talks today, during a three-hour meeting at a resort outside the London city center.

“Turkey has not received the kind of robust support it expected from NATO in recent years. NATO must understand and acknowledge the national security concerns of member states and devise solutions accordingly at both tactical and operational levels,” Presidential Communications Director Fahrettin Altun wrote on Twitter yesterday.
"Turkey has been enormously important in our joint efforts to fight ISIS," NATO Secretary-General Jens Stoltenberg also said on Tuesday regarding the issue, using another acronym for Daesh.

The NATO chief stressed that the coalition to defeat Daesh has been able to liberate territories under control of the terrorist group by using infrastructure based in Turkey.

"So, in the fight against ISIS, Turkey has played a key role," he added.

Another strain in the alliance’s relations has been the issue of defense spending. Trump has been a frequent critic of alliance members, notably Germany, complaining that many have not met their goal of devoting 2% of economic output to defense spending.

Upon debates about NATO spending, Germany announced last month that it is boosting defense spending in the coming year to come closer to NATO's 2% target. Germany is to report to the alliance that it will spend 50.25 billion euros ($55.6 billion) on defense in 2020, sources in Brussels said. This is estimated to represent 1.42% of gross domestic product.

On Tuesday evening, the 29 NATO leaders are to attend a reception with Queen Elizabeth II at Buckingham Palace.

Relations with China and Russia will also be on Turkey’s agenda during the summit. China as a rising power and Russia as a leading actor worldwide and an important player in the region are regarded as significant in Turkey’s multifaceted cooperation.

“Our relations with Russia and other countries are not alternatives for connections with our allies, but rather complementary elements,” the president said.

NATO’s two defense plans for Turkey, Baltics on the agenda

Ankara had refused a NATO defense plan for the Baltics and Poland after the U.S. rejected a defense plan concerning Turkey, which recognizes the YPG and PKK as national threats.

If the defense plan concerning Turkey is published, it would mean the U.S. could be held legally responsible for supporting terrorist organizations, according to Turkish authorities.

NATO has two defense plans, one of which is designed for the Baltic states and Poland, drawn up at their request after Russia annexed Crimea from Ukraine in 2014. The other is for Turkey, regarding threats coming from the south.

Accordingly, the issue came up at the NATO foreign ministers meeting on Nov. 20. The Turkish delegation demanded that the same level of sensitivity be shown to Turkey as it was being shown for the Baltics.

U.S. Defense Secretary Mark Esper, on the other hand, urged Turkey not to halt the Baltics defense plan on Monday in an interview. Saying that "not everybody sees the threats that they see," referring to Turkey’s concerns on terrorist threats, Esper added, "The message to Turkey ... is we need to move forward on these response plans and it can't be held up by their particular concerns.”

Furthermore, Lithuanian Foreign Minister Linas Linkevičius stated, "I don't believe they [Turkey] are blocking anything against the Baltic states. They have their own security concerns ... it's more about the interests of Turkey. We'll find a solution."