Greece to bring Turkey's deal with Libya to table in London 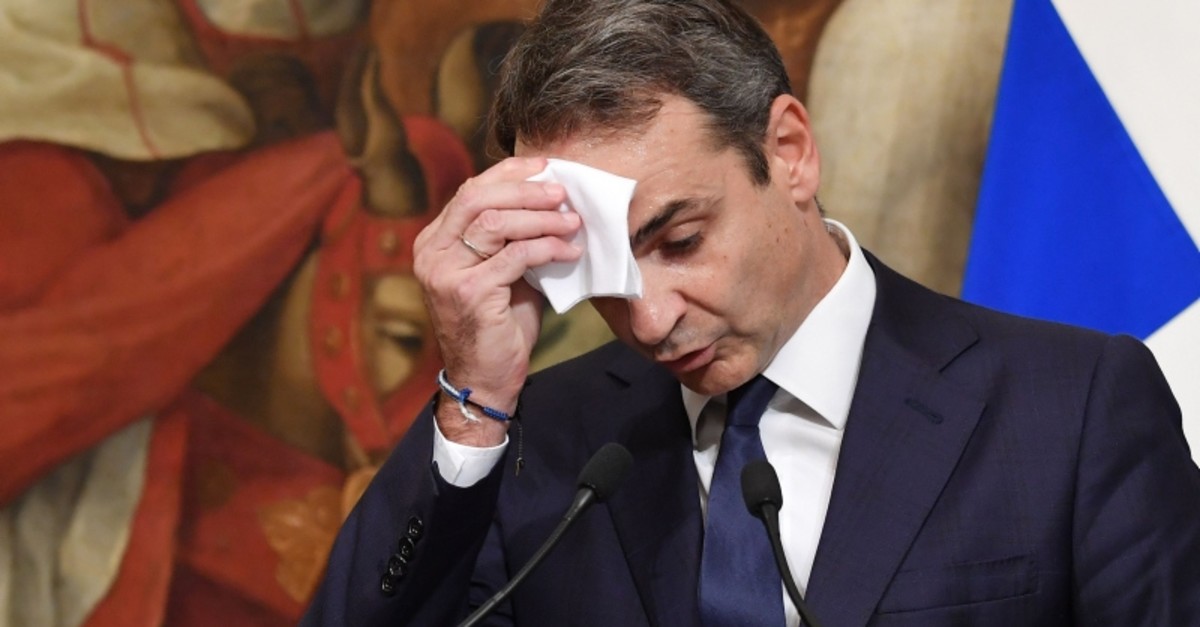 Greek Prime Minister Kyriakos Mitsotakis wipes his forehead during a joint press conference with his Italian counterpart following their meeting at Palazzo Chigi on November 26, 2019 in Rome. (AFP Photo)
by Daily Sabah with Agencies Dec 03, 2019 5:28 pm

Greece continues to seek support in opposition of Turkey’ s stance on the Eastern Mediterranean. Athens is expected to introduce the issue to the agenda during the NATO summit in London, despite having no real legal basis to back its arguments.
Greek Prime Minister Kyriakos Mitsotakis expressed his unease with Turkey’s recent deal with Libya yesterday, saying that he will seek support from its NATO allies.
Announcing that he will have a side meeting with President Recep Tayyip Erdoğan during the summit, Mitsotakis said the talks will set an atmosphere where the “cards on the table.”
Turkey and Libya signed a deal last week after a meeting between Erdoğan and the head of the Presidential Council of Libya's U.N.-backed Government of National Accord (GNA), Fayez Al Sarraj, in Istanbul. The deal enabled Turkey to secure its rights in the Mediterranean while preventing any fait accompli by other regional states.
However, Greece, one of the main regional actors, did not welcome the deal and regarded it as a violation of its rights, though international law proves otherwise.
Referring to the deal as a “provocation,” the Greek prime minister stated that Ankara’s move “will not produce internationally legal results,” claiming that it “cannot challenge the sovereign rights of our islands.”
According to the U.N. Convention on the Law of the Sea, while a country is able to stretch its territorial waters only 12 nautical miles out to sea, when it comes to the exclusive economic zone, where it has the rights to fishing, mining and drilling, the area can extend for an additional 200 miles. However, if the maritime distance between the two countries is less than 424 miles, a bilateral deal is needed to determine a mutually agreed-upon dividing line for their respective exclusive economic zones.
Greece, on the other hand, claims that the islands also have their own exclusive economic zones and with this claim, it reduces Turkey's zone remarkably while twisting what the international law states.
Turkey has the longest shoreline in the Eastern Mediterranean, making it a natural candidate for seeking reserves in the region in accordance with international law. The presence of the Turkish Cypriot government in Northern Cyprus also strengthens Turkey's hand as the country defends the rights of Turkish Cypriots in the region and insists that their consent is needed for any type of drilling activities.
Greece's approach also violates Libya’s rights in the region. For instance, it claims that the island of Crete also has an exclusive economic zone, and by doing so is extorting one-third of the area that belongs to Libya in the region.
Greece threatens Libya
Meanwhile, Greece's foreign minister on Monday threatened to expel the Libyan ambassador to Athens unless provided with details of the agreement reached with Ankara.
Greece wants to see the agreement by Friday "or (the ambassador) will be declared persona non grata and will leave," Foreign Minister Nikos Dendias told Skai TV. Previously, Dendias summoned Turkey's Athens envoy Burak Özügergin, demanding an explanation for the case.
Following the deal, the Greek media even argued to shift the country’s position in Libya’s conflict in an attempt to punish the country for siding with Turkey.
Libya has remained dogged by turmoil since 2011 when a NATO-backed uprising led to the ouster and death of former President Moammar Gadhafi after more than four decades in power.
Since then, Libya's stark political divisions have yielded two rival seats of power, one in Tobruk and another in Tripoli, and a host of heavily armed militia groups.
The military, pushed by Khalifa Haftar's army, allied with a parallel eastern administration based in Benghazi, marking a dangerous escalation of a power struggle that has dragged on since Gadhafi's overthrow. Haftar is not recognized by the international community, as the elected parliament of the country is centered in Tripoli.
Map delineates Turkey's maritime frontiers
Despite the fact that Turkey has the longest shoreline in the region, when it comes to the drilling activities no country has felt the need to consult or engage in dialogue with Ankara on the issue. Still, until very recently, Ankara expressed willingness to establish dialogue channels with various regional countries, and yet all its attempts fell flat. Egypt even organized the East Mediterranean Gas Forum this year, inviting all the regional countries, except for Turkey.
As a mostly "lone" actor in the region, Turkey has attempted to secure its rights in the region; first in the early 2000s, then in 2006 when the country launched Operation Mediterranean Shield to protect its rights. Since then, more than 20 illegal drilling activities have been stopped by Turkey.
A Turkish diplomat on Monday shared a map of the country's continental shelf and the borders of its exclusive economic zone (EEZ) in the Eastern Mediterranean following a maritime jurisdiction agreement with Libya.
With the chart, Çağatay Erciyes showed the outer boundaries of Turkey's continental shelf and the EEZ, designated in a 2011 agreement between Turkey and the Turkish Republic of Northern Cyprus (TRNC), the median line between Egypt and Turkey's mainlands and the memorandum with Libya.
Last Update: Dec 20, 2019 2:07 am
RELATED TOPICS