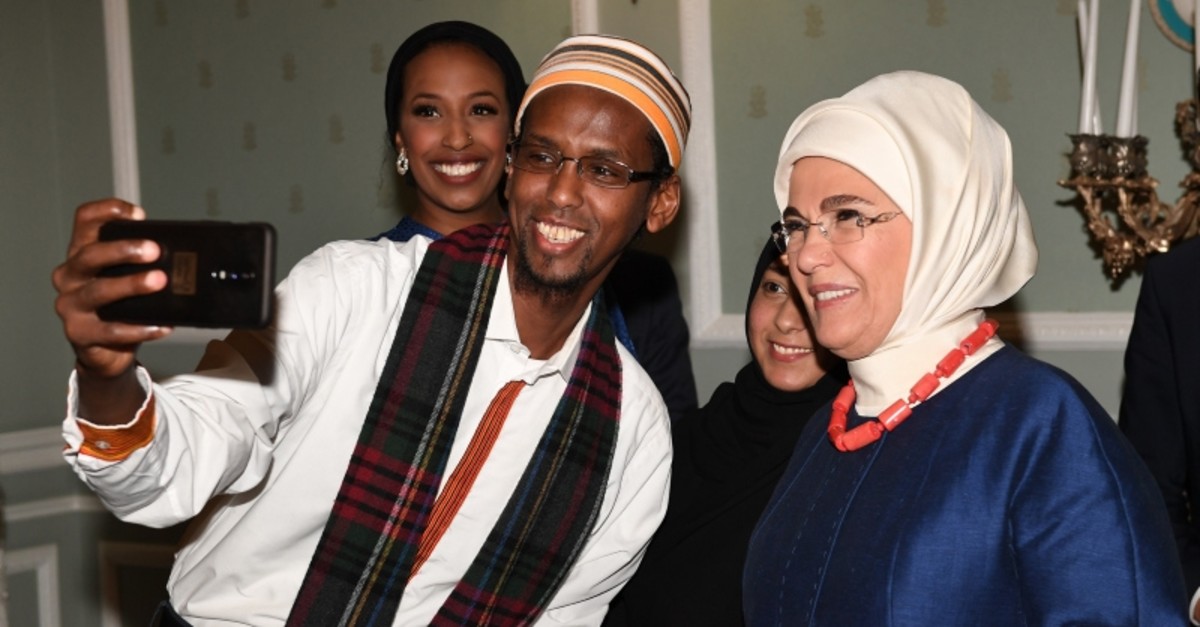 |IHA Photo
by Daily Sabah with AA Dec 05, 2019 3:02 pm
First lady Emine Erdoğan met with representatives of the Global Somali Diaspora Organization and members of the U.K. Parliament Wednesday following a NATO summit in London, the Turkish presidency said in a statement.
Erdoğan met with members of the House of Lords, Conservative Baroness Sayeeda Warsi and Liberal Democrat Lord Qurban Hussain as well as Labour member of Parliament Yasmin Qureshi and Shadow Minister Naz Shah at the Turkish Embassy in London.
Multiculturalism and the refugee crisis were the main topics of their meeting. Erdoğan said Turkey gave the best answer to rising xenophobia worldwide by hosting the most refugees in the world.
During her meeting with the representatives of the Global Somali Diaspora Organization, Somalia's future was discussed.
Praising Turkey's support for Somalia's development, Erdoğan said Turkey aims to make Somalia a country that can stand on its own.
"We talked about the future of our sister country Somalia. It is very important that young Somalian people in the diaspora be sensitive to the problems of their country," Erdoğan said early Thursday on Twitter.
Turkey, under the ruling Justice and Development Party (AK Party) government, launched a continental initiative to reach out to African countries whose relations with Turkey have been mostly limited since the early years of the republic.
Turkey's vast aid effort at the height of the 2011 famine endeared it to many Somali people, and it has continued to pour in aid, much of it from private companies.
It has built schools, hospitals and infrastructure and provided Somalis with scholarships to study in Turkey. President Recep Tayyip Erdoğan has visited Mogadishu twice since his visit to the war-ravaged country in 2011. He was the first non-African leader to visit the war-ravaged country in 20 years.
Rapidly growing trade between the two nations soon followed. In 2010, Turkish exports to Somalia totaled just $5.1 million but in five years, this figure ballooned to $123 million. In the space of a few years, Turkey has gone from Somalia's 20th-largest source of imports to its fifth-largest.
Erdoğan arrived Tuesday in London to accompany President Recep Tayyip Erdoğan at the NATO summit, which marked the organization's 70th anniversary.
Last Update: Dec 20, 2019 2:09 am
RELATED TOPICS