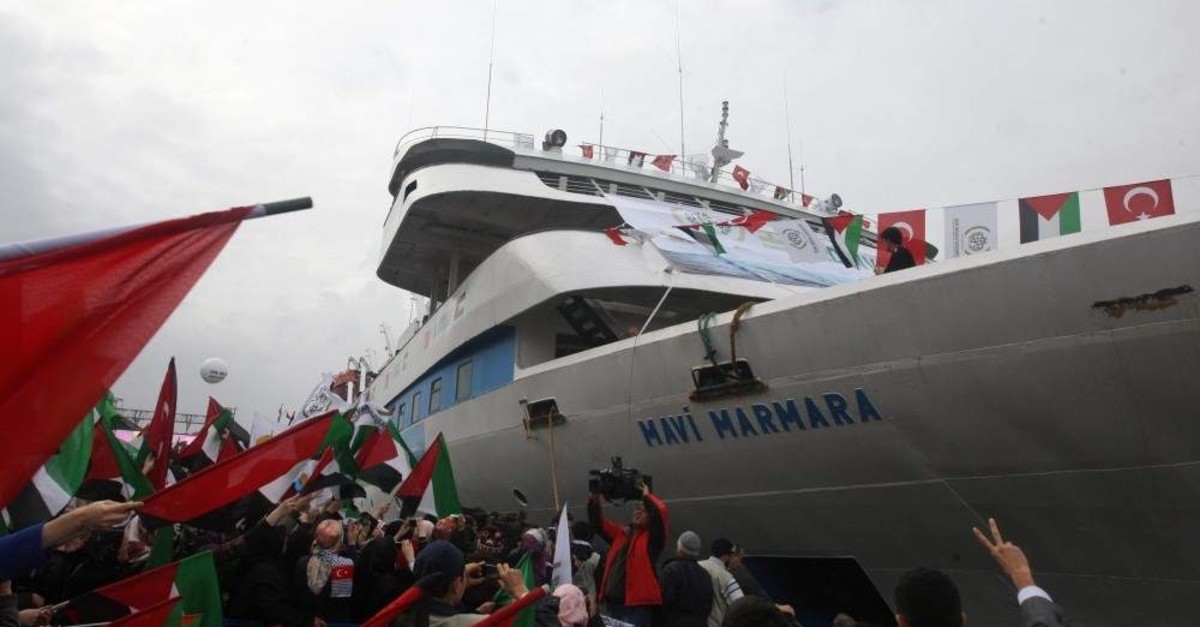 In this file photo taken on Dec. 26, 2010, people holding Turkish and Palestinian flags cheer as the Mavi Marmara ship arrives back in Istanbul, Turkey. (AP Photo)
by Compiled from Wire Services Dec 05, 2019 4:37 pm

Families of the victims violently killed in an Israeli raid on a Turkish aid flotilla to Gaza in 2010 will appeal the International Criminal Court's decision not to press charges against Israel, their lawyers announced Thursday.
The ICC's chief prosecutor Fatou Bensouda said Monday there was "no reasonable basis to proceed with an investigation."
Nine Turkish citizens lost their lives when Israeli commandos stormed the Mavi Marmara ship, which was trying to break the blockade on Gaza and deliver humanitarian aid.
One other victim died in the hospital in 2014, bringing the death toll from the incident to 10.
The ICC's decision shows the "intent is to safeguard Israel -- so blatantly and flagrantly right under the international community's nose -- against any indictments of war crimes," the families' lawyers said in a joint statement.
"We expect the High Court to accept our appeal and initiate the investigation by overturning the prosecutor's decision," they added.
The ICC prosecutor's decision came three months after the tribunal's judges in The Hague ordered her for a second time to reconsider investigating the case.
The legal process was triggered in May 2013 by Comoros, the Indian Ocean nation where the ship was registered.
The prosecutor's office said in 2014 that the case was "not of sufficient gravity" to come before the international court.
The families' lawyers said it was not an isolated problem and that the prosecutor's office "willfully refuses" to open investigations involving Palestinian causes.
The ICC was set up as a court of last resort intended to prosecute senior leaders allegedly responsible for grave crimes including genocide, war crimes and crimes against humanity when national courts prove unable or unwilling to take on such cases.
Ties between Israel and Turkey crumbled after the raid but they later agreed to end the row after secret talks.
Israel offered an apology over the raid, permission for Turkish aid to reach Gaza through Israeli ports, and a payout of $20 million to families of those killed.
Last Update: Dec 20, 2019 2:10 am
RELATED TOPICS