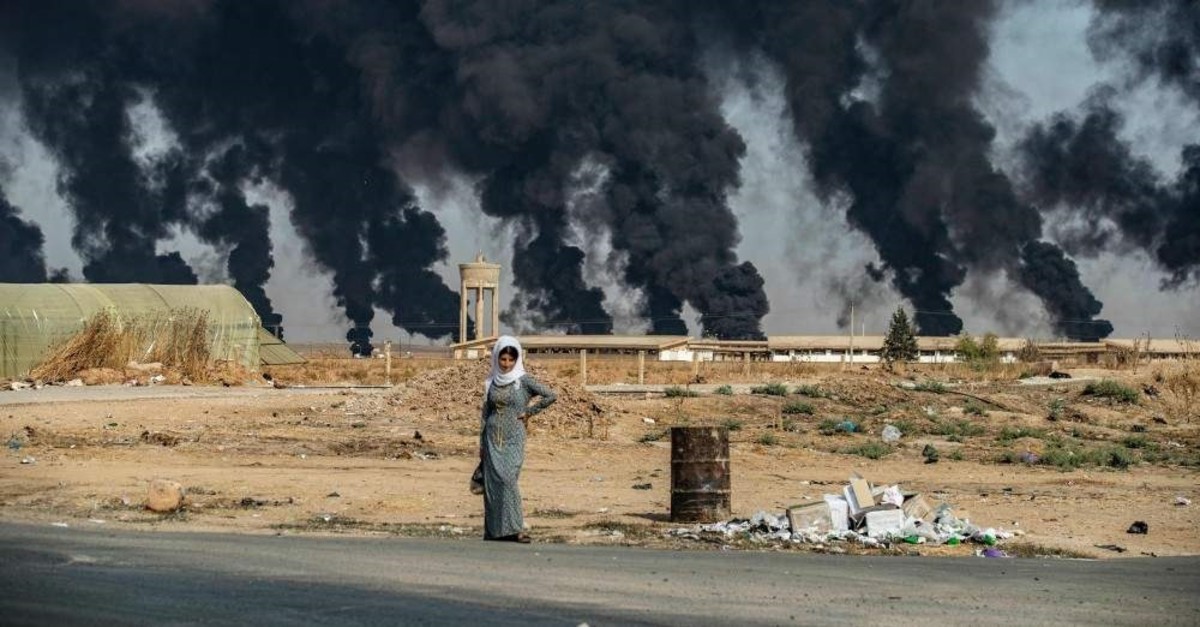 A woman stands on the side of a road on the outskirts of the Syrian town of Tal Tamr along the border with Turkey in the northeastern Hassakeh province on Oct. 16, 2019. (AFP Photo)
by Daily Sabah with AA Dec 05, 2019 10:10 am

Turkey’s borders mark NATO’s borders and therefore the threats on the country’s borders should be considered threats against the bloc as per Article 5 of the NATO treaty, Turkish officials said this week.

"We must be on the same page about something as simple as identifying a terror organization," Altun said on Twitter.

Altun stressed that some of Turkey's allies have supported, promoted and legitimized the PKK’s Syrian offshoot the People’s Protection Units (YPG) terror group, which recruits children, conducts ethnic cleansing and forces the migration of civilians.

Altun underlined that the YPG/PKK must be treated as what it is: a "murderous terrorist organization" and a "threat to regional and international security."

Praising Turkey's anti-terror operation in northern Syria, Altun said that close to 400,000 Syrians have returned to their country thanks to Operation Peace Spring.

"Our military operations are not only about fighting terrorists but establishing the conditions for the safe return of Syrians and ensuring stability in the region," he said.

Under two separate deals with the U.S. and Russia, Turkey paused the operation to allow the withdrawal of YPG/PKK terrorists from a planned Syrian safe zone.

Altun also underlined that NATO needs a strategy to address the "increasingly complex challenges of our time."

"We often find issues of terrorism, refugees, regional strategy all wrapped up together to pose security threats to our alliance," Altun said, adding that this reality must be recognized for a stronger alliance.

Turkey's defense spending has reached 1.89% of its GDP with a 53% increase over the past five years, according to the data he shared.

He also stressed that Turkey has 1,200 service members participating in various NATO missions.

The ruling Justice and Development Party (AK Party) Deputy Chairman Mahir Ünal also urged NATO to consider Article 5, the cornerstone of the bloc, and see Turkey’s borders as the borders of the alliance.

“Turkey’s southern borders mark the southern borders of NATO; therefore, any threats against these borders, including shootings and civilian deaths, directly concern NATO in line with Article 5,” Ünal told a television broadcast on Wednesday.

Ünal continued by noting that all allies know the YPG is the Syrian extension of the PKK, recognized as a terrorist organization by many NATO allies.

“They recognize this in private meetings but avoid it when they’re in front of cameras,” Ünal said.

He also highlighted that President Recep Tayyip Erdoğan drew attention to this concern in his meetings with French, German and British leaders and others during the summit in London.