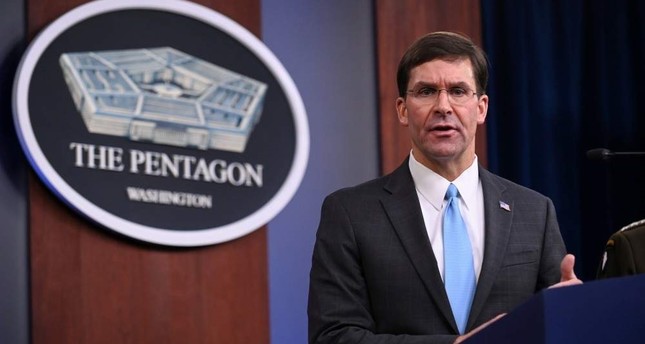 The United States has completed its military pullback in northeastern Syria, settling into a more stable posture of about 600 troops in the rest of the country after repositioning and reducing forces, Defense Secretary Mark Esper said.

Esper's remarks in an interview with Reuters could signal the end of a period of turbulence and uncertainty surrounding the U.S. military presence in Syria after President Donald Trump's initial withdrawal order in October.

Since then, troop levels in Syria have fallen about 40% from around 1,000.

Esper stressed he retained the ability to move in and out smaller numbers of forces as needed into Syria. But he suggested the number of troops will fluctuate around the 600-level for the foreseeable future.

"It will be relatively static around that number. But if we see things happen ... I can dial up a little bit," Esper said late Wednesday during a flight back from the NATO summit on the outskirts of London.

Esper also didn't rule out being able to reduce U.S. troop levels in Syria further if European allies contributed to the Syria mission.

"The coalition is talking a lot again. We could see some allies want to volunteer troops," Esper said, without suggesting any new contribution was imminent.

"If an allied country, a NATO country, decided to give us 50 people, I might be able to turn off 50 people."

The U.S. military says it is focused on preventing a resurgence of Daesh terror group in Syria and carried out a raid last month that led to the death of Daesh leader Abu Bakr al-Baghdadi.

"We kept the oil. And the oil is what fueled ISIS," Trump said, using an acronym for Daesh.

Trump softened his pullout plans for Syria after backlash from Congress, including among key Republicans, who criticize the president for clearing the way for a long-awaited anti-terror operation by Turkey against the terrorist PKK's Syrian affiliate, the People's Protection Units (YPG), with whom the U.S. partnered in its fight against Daesh.

After summit talks between Trump and President Recep Tayyip Erdoğan, Esper said Ankara had not budged on the issue of its purchase of Russian S-400 air defenses.

The Ankara-Moscow S-400 deal was inked in December 2017, when the parties signed a $2.5-billion agreement for two batteries of the S-400, which is Russia's most advanced long-range anti-aircraft missile system in use since 2007.

Washington says the S-400 system is incompatible with NATO air defenses, poses a threat to Lockheed Martin Corp's F-35 stealth fighter jets and announced in July it was removing Turkey from the F-35 program. It has also warned of possible U.S. sanctions.

Turkey, however, emphasized that the S-400 would not be integrated into NATO systems and would pose no threat to the alliance, rejecting calls to back out of the deal. Ankara also stressed it was the U.S.' refusal to sell it Patriots that led it to need to seek out other sellers, adding that Russia offered it a better deal, including technology transfers.

Trump on Tuesday defended Turkey's decision to buy the Russian S-400 missile defense system as he praised his relationship with Erdoğan ahead of the NATO summit.

"Turkey bought billions and billions worth of F-35 fighter jets," Trump said, adding that if the U.S. refuses to deliver, the country will explore other venues including Russia and China.

"I like Turkey and I get along very well with the president," Trump told reporters, adding that the country "could not have been more supportive" when the U.S. used its airspace to attack and kill Daesh terrorist leader al-Baghdadi.