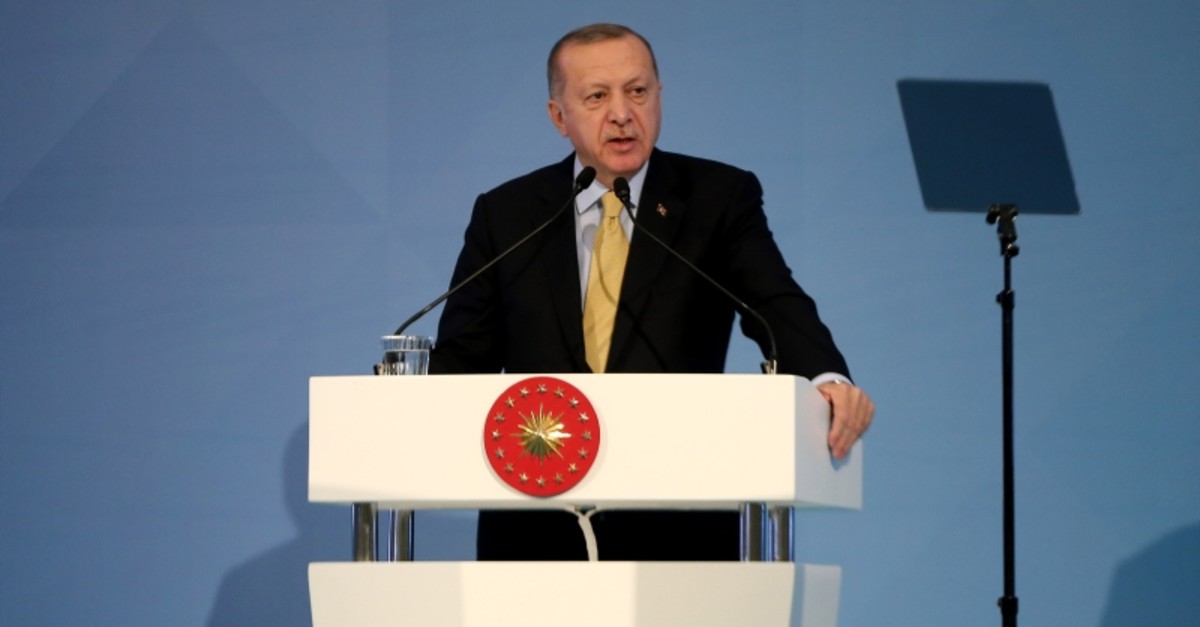 Turkey generally feels alone regarding the situation in Jerusalem and Palestine, but will not stop defending the cause, President Recep Tayyip Erdoğan vowed Monday.

"The situation in Palestine and Jerusalem is deteriorating and some Arab countries are encouraging Israeli violations. I feel like Turkey is alone on this, but we will continue to stand with the oppressed," Erdoğan told a meeting of the Organization of Islamic Cooperation (OIC) in Istanbul.
Recalling that the Jerusalem case laid the foundation of the OIC, Erdogan said that the situation in Jerusalem and Palestine is getting worse every day.
He noted that Israel's attitude, which does not recognize rights, law, justice and humanity, constantly deepens the crisis in the region against Muslims.
"We are aware that one of the reasons behind the terrorist attacks and economic sabotages we have been subjected to in recent years is our principled stance," he said, adding that Turkey will continue to stand in solidarity with the oppressed and never stop defending the rights of the Palestinians.
Israel occupied east Jerusalem during the 1967 Arab-Israeli War. In 1980, in a move never recognized by the international community, Israel annexed the entire city, claiming it as the self-proclaimed Jewish state's "eternal and undivided" capital.
Erdoğan also underlined that the imperialist approach of divide, disintegrate and rule continues in Islamic countries saying: "Muslims, who make up about one-fourth of the world's population today, do not have, unfortunately, the political influence or the economic, social or cultural prowess.”

"The better we protect children, women, elderly and disabled against western threats, the more we protect our family structure," he said.
The Turkish president added that "isolated" Islamic countries are wasting their opportunities and energies.

Erdoğan stressed that it was impossible to get somewhere by simply complaining or talking, arguing for the pressing need to think carefully, analyze and produce solutions to the causes of oppression felt by Muslims today.

"It is our responsibility, as Muslims, to take Islamic civilization to its rightful place," he said.

He noted that in 2018, Turkey was added to the "very high" development category for the first time, posting 0.806 value points on the human development index (HDI).
Turkey ranked 59th out of 189 countries and territories, the United Nations Development Program (UNDP) said in a report released Monday.
The HDI is a summary measure for assessing long-term progress in three basic dimensions of human development: a long and healthy life, access to knowledge and a decent standard of living.
Erdoğan later spoke at the Eighth Ministerial Conference of Heart of Asia-Istanbul Process at Dolmabahçe Palace under the theme of "peace, partnership, prosperity."
In his speech, Erdoğan called on the international community to boost the investments made for Afghanistan in the last 18 years as the country has been going through a sensitive period.
His speech focused on "regional cooperation" to tackle problems the South Asia region has been facing.
"I believe that the Heart of Asia-Istanbul Process is also very useful and effective in providing regional support for peace," he said.
Erdoğan said while the international community was committed to its pledges to Afghanistan, it was important that the Afghan government fulfills its obligations.

"We welcome the positive steps taken by the Afghan government in the implementation of the Mutual Accountability Framework adopted in Geneva last year," Erdoğan said.
He added that Turkey would do its best to eradicate the Daesh terrorist group's presence in Afghanistan.
The Heart of the Asia-Istanbul Process – a regional initiative of Afghanistan and Turkey launched in 2011 – has two chairs, with Afghanistan as the permanent chair, as well as a co-chair from among member states shifting each year.

"The process aims to promote regional security, economic and political cooperation centered on Afghanistan through dialogue and confidence-building measures," according to the organization's website.