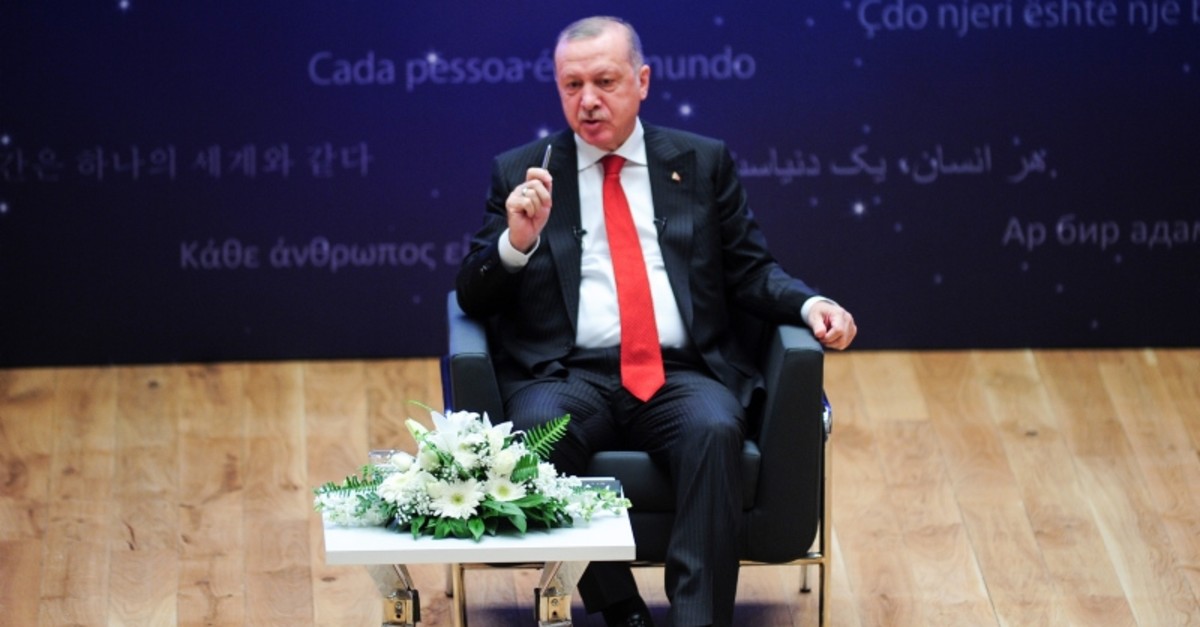 |IHA Photo
by Daily Sabah Dec 10, 2019 2:50 pm
President Recep Tayyip Erdoğan warned that there a serious leadership crisis in Europe, as he said the current leaders hamper cooperation efforts.
“There is currently a serious leadership crisis in Europe. Former German Chancellor Gerhard Schröder used to be an inspiring leader but the bloc lacks such a leader now,” the president said in response to a question asked at a youth conference in Ankara on Tuesday.
He noted that Chancellor Angela Merkel has utilized the reforms initiated by Schröder, but current European leaders are not open to cooperation.
The president said he looks up to Prophet Muhammed as the one and only guide and leader and also sees his companion Omar bin Khattab as a leader to follow regarding the concept of justice.
He praised U.S. President Donald Trump for not having a hidden agenda.
“Whether you like him or not. Mr. Trump is a significant figure, he speaks frankly to me and I do so as well,” Erdoğan said.
Russian President Vladimir Putin also does not have a hidden agenda and cooperates with Turkey to facilitate peace in the region, the president said.
The president also praised the Qatari Emir Sheikh Tamim bin Hamad Al-Thani as a young and dynamic leader in the Gulf.
“He always stands beside the poor and provides help to the countries in need,” he said.
Erdoğan continued by saying that he emphasizes protecting the rights of the oppressed whenever he can, especially during global meetings, including the recent NATO summit and the United Nations General Assembly meeting.
Touching upon some international actors’ opposition to Turkey’s Eastern Mediterranean maritime pact with Libya, Erdoğan said Turkey has addressed the legitimate leader of the country in the process, Prime Minister of the Government of National Accord of Libya Fayez al-Sarraj.
“This was actually a process that was launched in the Qaddafi era but it ended when he died,” Erdoğan said, adding that Khalifa Haftar is not the internationally recognized legitimate leader of the country.
“This is why we sat on the table with Sarraj and continue to cooperate with him,” Erdoğan said.
Erdoğan noted that Turkey will continue to seek agreements with its neighbors in line with international law and regulations as long as it is based on a win-on-win rather than a one-sided relation.
Last Update: Dec 20, 2019 2:17 am
RELATED TOPICS