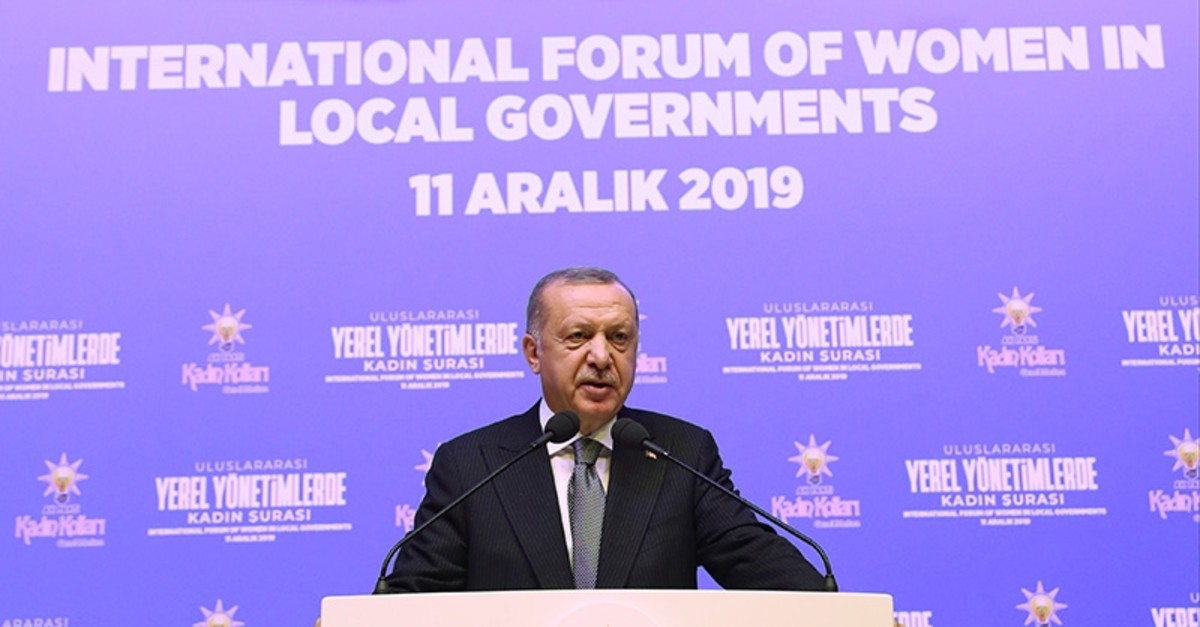 | AA Photo
by Daily Sabah Dec 11, 2019 3:37 pm
The ruling Justice and Development Party (AK Party) maintains its aim to increase women’s participation in politics while it already boasts the highest number of women members among Turkish political parties.
“The AK Party has increased the percentage of women in politics from 4.5% to 17% and we will work to further improve this in the next elections. I expect all women to take a more active role in politics,” President Recep Tayyip Erdoğan said during his speech at the International Forum of Women in Local Governments in Ankara yesterday.
“We will work for our women to take place in both candidate lists and city councils at higher rates during upcoming elections,” the president said.
The president also paid tribute to Turkish bomb disposal expert Esma Çevik who lost her life last week in southeast Turkey’s Şırnak.
Turkey had been one of the first countries to grant women the right to vote and be voted in back in 1934. In 2013 it lifted a ban on headscarves in public places. Today, out of 102 women deputies, 53 are from the AK Party while two ministers are women – Trade Minister Ruhsar Pekcan and Family, Labor and Social Services Minister Zehra Zümrüt Selçuk.
During the event, Gaziantep Mayor Fatma Şahin and Mayor of the Indonesian city of Surabaya Tri Rismaharini pledged to cooperate in the future.
Among the attendees were representatives of 18 countries, including Indonesia, Kenya, Palestine, Norway, Somalia, Serbia while leading Turkish politicians were also present among over 3,000 guests.
There are 64 women ambassadors in the Turkish foreign services and 65 are working in local authorities. In the last elections in March 2019, 1,052 women were chosen as local council members. While 1,088 women were chosen as village headmen throughout Turkey. On the other hand, there are seven AK Party female mayors in Turkey.
More than 4 million women in Turkey are college graduates, while 386,985 have master's degrees and 82,561 have obtained their doctorates. The female academician rate at Turkish universities is at 50.08%.
“The event will create a platform for sharing the experiences of women mayors and local governors from different countries; for sharing the projects they realize in their own countries and for identifying the steps for local development to offer holistic solutions to our cities of the 21st century. We want this forum where we discuss local governments and women's direct participation in local governments in many respects to be instrumental In further projects, works and achievements,” Ankara Deputy and Chair of AK Party Women's Branch Lütfiye Selva Çam said.
The AK Party has 4,688,796 women members and they will continue to grow and be the voice of politics. In addition to female participation in politics, the party also accomplished numerous achievements to strengthen women's position in society.
For instance, the AK Party added affirmative action in the Turkish Constitution, founded family courts to solve family and women-related cases, and passed a law to protect the family and stop violence against women. The AK Party also lifted the hijab ban that prevented many women from pursuing a higher level of education or working in public institutions.
Transforming Turkish politics for the last 18 years, the AK Party has been preparing to lead new reforms that will enable Turkey to reach its 2023 targets. Only one year after its foundation, the AK Party brought an enormous achievement in the first general elections, garnering 34.3% of the vote in the Nov. 3, 2002 elections and earning 363 seats in Parliament.
Since then, the AK Party has never lost an election. In the last 17 years under the AK Party administration, Turkey has witnessed rapid development in many areas including economy, democracy, individual liberties and rights, health and educational services in a stable political environment.
Last Update: Dec 20, 2019 2:19 am
RELATED TOPICS