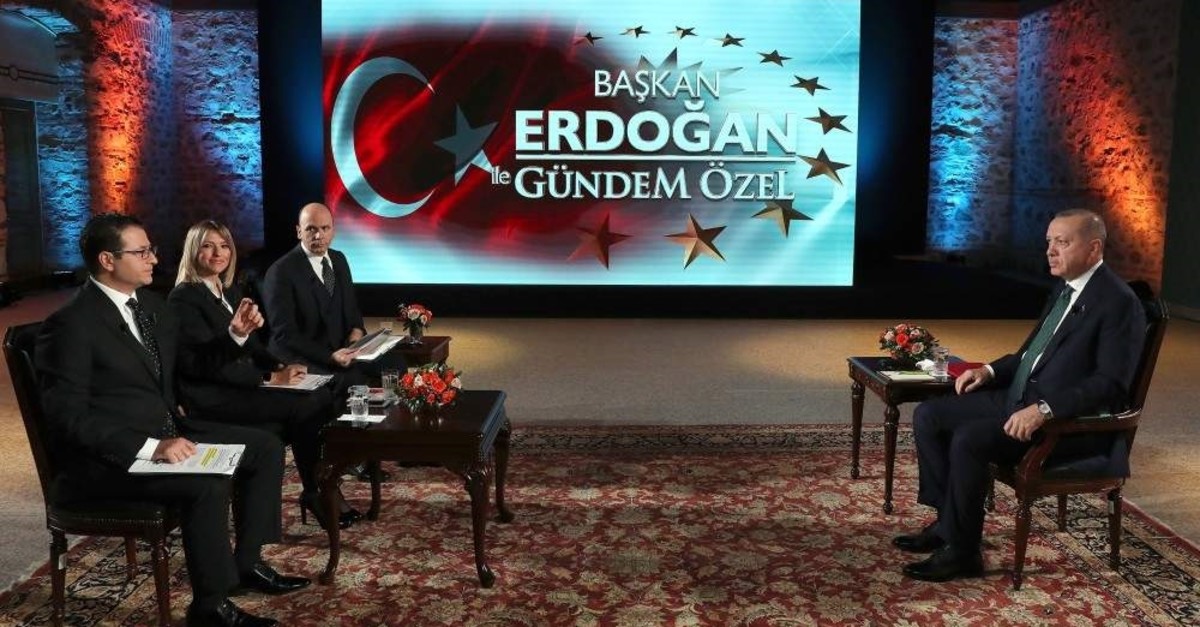 Turkey will not have its hands tied vis-a-vis U.S. sanction threats and may retaliate by closing essential bases used by U.S. soldiers

Turkey has been signaling the possibility of shutting down the Incirlik airbase, which would change U.S. projections in the region as the base is of vital geopolitical significance for the Middle East. Turkey is trying to preserve its national interests in the face of threats to its national security, ignored by its NATO ally the U.S., whereas Washington still tries to put pressure on Ankara with sanctions, experts say.

Speaking to Daily Sabah, Hüseyin Alptekin, a researcher at the Foundation for Political, Economic and Social Research (SETA), said: “Turkey has been negatively affected by the U.S.’ Middle East projection for a long time and is trying to protect its national interests. In the face of these developments, the U.S. has to take a step toward Turkey and has to accept Turkey as an autonomous actor.”
In the face of new challenges between the U.S. and Turkey, Ankara may choose to close down two bases where U.S. soldiers are stationed in the country, President Recep Tayyip Erdoğan said Sunday.

"If necessary, we will have a discussion with our delegations and we may close down Incirlik [air base in southern Adana province] and Kürecik [radar station in eastern Malatya province]," Erdoğan said in an interview with the private news broadcaster TV, A Haber.

"If they threaten us with the implementation of these sanctions, of course, we will retaliate," he said.

Speaking of a U.S. Senate resolution recognizing the 1915 events as "Armenian genocide," Erdoğan said the bill was "completely political."
"It is very important for both sides that the U.S. does not take irreparable steps in our relations," he added.

The U.S. Senate unanimously passed a resolution on Dec.12 recognizing the so-called Armenian genocide. The resolution had been blocked several times in the Senate, even though the Democratic-led House of Representatives passed the resolution by an overwhelming 405-11 in late October. The resolution asserts that it is U.S. policy to commemorate the 1915 events as "genocide."

Underlining Incirlik's geopolitical significance, Alptekin said: “The base has operational potential to three regions Russia, Iran and towards the Arabian peninsula, as we saw during the Gulf War.” Reminding that Turkey had previously shut Incirlik off to the U.S. in 1975 for three years and limited it to the use of NATO, Alptekin continued “Incirlik is a NATO base. Turkey allowed the U.S. to use the base. Thus, Turkey could again close it to the U.S. while it remains open to NATO.”
"We regret that the polarization in U.S. domestic politics has had negative consequences for us and that some groups abuse the developments about our country for their own interests to weaken [President Donald] Trump," Erdoğan said in the interview.
He added that Trump is unfortunately not the only decision-maker and that his personal relationship with the U.S. president is not enough to change the situation. Erdoğan also pointed out that this move did not comply with the spirit of allies and that it is a violation of the agreement regarding Syria reached with the U.S. on Oct.17.Erdoğan suggested that Turkey could also respond with parliamentary resolutions recognizing the killings of indigenous Americans in past centuries as genocide. “The history of Native Americans is the U.S.’ disgrace. Similar events have taken place in Africa,” the president said, reminding of the massacres in Rwanda and Algeria by France.

“The Incirlik airbase is critical for the U.S. in terms of intervening in the region and taking on supplies and sending reinforcement. Now, it depends on (U.S. President Donald) Trump to ratify or reject the resolution, which will be determinant,” Ahmet Keser of Hasan Kalyoncu University told Daily Sabah, adding that the Senate’s decision did not only originate from one issue but also due to the issues of Syria, the Eastern Mediterranean and Libya.

The U.S. Senate's recent decisions on Turkey are political moves, mainly reflecting the domestic situation in Washington, experts say. Turkey-U.S. relations have soured over a range of issues, including Washington's support for the YPG terror group in northern Syria, inaction against the Gülenist Terror Group (FETÖ) and anti-Turkish legislation.

Following the July 15 coup attempt, authorities had detained hundreds of officers of the Turkish Air Forces linked to the terrorist group in nationwide operations. Bekir Ercan Van, a Turkish general stationed at the base, was among those arrested immediately after the coup attempt on charges of carrying out the coup. Following the interrogation of suspects, it was found out that FETÖ infiltrators were able to refuel their aircraft through the Incirlik airbase.

The president also offered to analyze documents on the 1915 events prepared by historians, archaeologists and lawmakers. Turkey has over 1 million documents, whereas the U.S. has a small amount kept exclusively at Harvard, and some are in France, according to Erdoğan. “Only after that we politicians can interfere if necessary because this is not a decision politicians can make,” he said.

Turkey's position on the 1915 events is that the deaths of Armenians in eastern Anatolia took place when some sided with invading Russians and revolted against the Ottoman forces. A subsequent relocation of Armenians resulted in numerous casualties.

Turkey objects to the presentation of the incidents as "genocide" but describes the events as a tragedy in which both sides suffered casualties.

Ankara has repeatedly proposed the creation of a joint commission of historians from Turkey and Armenia plus international experts to examine the issue.

“Instead of realizing that it neglected Turkey and trying to win it back, the U.S. is applying sanctions. Yet Turkey could retaliate if the U.S. continues to put pressure on Turkey in other issues such as the Halkbank and Armenian issues.
The current strain originates from the fact that the U.S. left Turkey on its own and now Turkey is acting autonomously, thus buying the S-400 missile defense system,” Alptekin underlined while saying that Turkey is still open for communication with the U.S.

Turkey not after Syria’s oil but regional peace

Another heavy strain on Ankara-Washington relations has been Turkey’s Operation Peace Spring launched on Oct.9 in northern Syria to enable the safe return of Syrian refugees and prevent the formation of a terror corridor on the country’s southern borders.

Certain U.S. lawmakers, including Republican Sen. Lindsey Graham, ramped up efforts to impose measures against Ankara in October when Turkey launched the operation in an attempt to clear northern Syria of YPG terrorists. Normally an ardent defender of fellow-Republican Trump, Graham and some others in his party have been harshly critical of Trump's decision to withdraw troops from northeastern Syria ahead of the Turkish counter-terror operation.

“Tal Abyad and Ras al-Ayn are 120 kilometers, the depth is 32 kilometers. We controlled these areas at the time, yet the Iraqi border, from what we call Malikiyah until the western end is 444 kilometers. These areas consist of agreements we made with Russia in one part and with America in another. However, unfortunately, neither the U.S. nor Russia have removed the terrorist organization YPG/PYD from here,” Erdoğan said, adding that both did not hold onto their promises and that Turkey has to act on its own.

Speaking on the oil fields in Deir el-Zour, the president pointed out that YPG terrorists take the oil and sell it to the Bashar Assad regime, while there is also oil found in Qamishli, controlled by Russia and the regime.

“The Astana process and the constitutional committee talks in Geneva will be decisive for the future of the region, yet the U.S. will not want to lose the oil fields,” Keser said.

Erdoğan also mentioned that he proposed to sell the oil in Deir el-Zour and Qamishli to establish and finance the safe zone and place refugees in a secure environment.

According to the local sources in Deir el-Zour, elements of the U.S. Army based in Iraq made deployments to the oil fields in the provinces of Hassakah and Deir el-Zour after crossing the al Waleed border gate Saturday night.

This is the second deployment of the U.S. army in a month. On Dec. 4-5, the army moved armored vehicles, pickups, heavy construction equipment and approximately 150 rigs into the region.

Currently, the U.S. has a total of 11 bases in the provinces of al-Hassakah, Raqqa and Deir el-Zour, which are currently under the control of the YPG.

“Turkey’s concern is not the oil, but the main issue is to provide peace for the people living there,” Erdoğan said.

The president also mentioned that the U.S. and western countries call the YPG "Kurds," which is disrespectful toward Kurdish people.
“We do not regard our Kurdish citizens or Kurdish people living in northern Syria as terrorists, indeed, there can be terrorists among them, as there can be among other ethnic groups. Terrorists also arise among religious groups,” Erdoğan said, adding that they do not call the YPG by its name and have found lastly another camouflage, calling terrorists the SDF.

“Those that are differentiating between terrorist organizations today, are sowing the seeds of future disasters,” Erdoğan said.